Sen. Vicki Marble Doubles Down on Threat to 9News Reporter: “I’ll Ambush HIM with MY Camera Crew!” 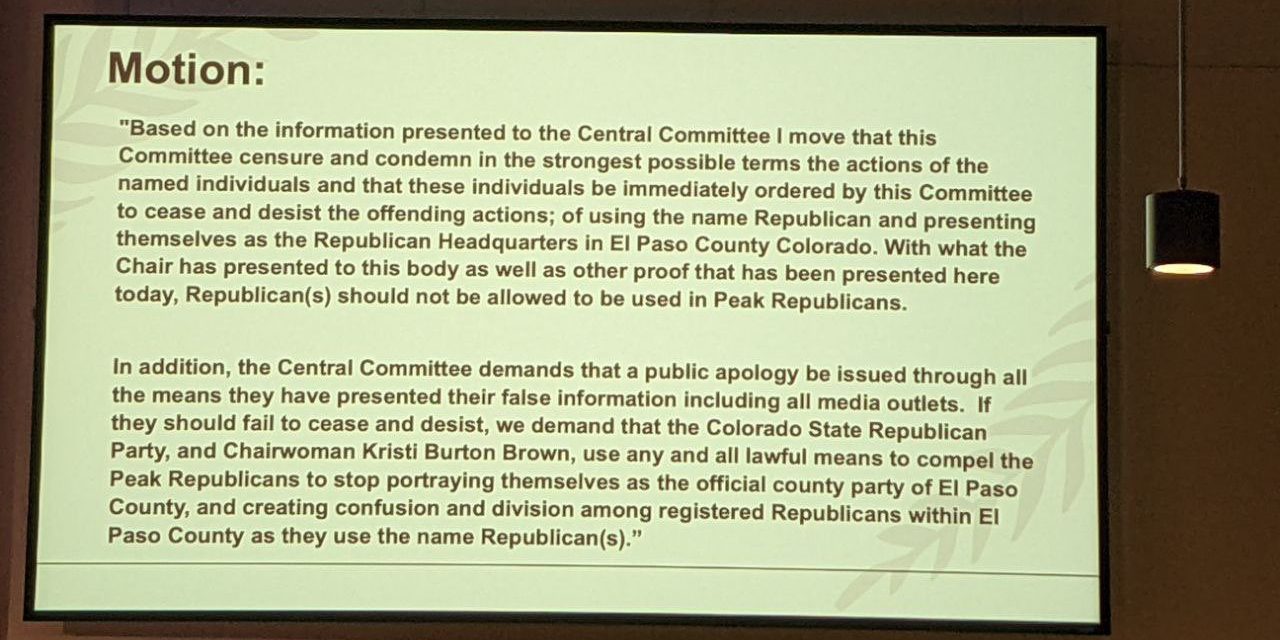 This Saturday, the last weekend before midterm elections, the El Paso County Republican Party held a special central committee meeting to censure 33 party members, many of whom are current elected officials and candidates for Tuesday’s election. Many of those censured Saturday have also opposed or otherwise run afoul of El Paso County GOP Chair Vickie Tonkins or her slate of FEC United-backed, extremist candidates. Once the flagship county party of the Colorado GOP, the El Paso County Republican Party is a house divided, engaged in what Rep. Dave Williams (R-Co Springs) calls a “civil war,” testing whether that party, or any party so conceived and so dedicated, can long endure. The Colorado Times Recorder has compiled nearly two years’ worth of Republican trials, tribulations, goofs, and gaffes to provide much-needed context for Saturday’s censure vote.

January 2021
Tonkins is up for reelection as party chair, following a tenure already marked by calls for her resignation due to claims made by Tonkins that the COVID-19 pandemic is a “psyop.” In the lead-up to the Feb. 6, 2021, central committee meeting, conservative activist group FEC United held a meeting at the El Paso County GOP headquarters to fill empty precinct leader positions, which vote for party chair, with FEC United members. On Jan. 30, 2021, out of concern for how the party is filling the positions, then-Rep. Tim Geitner (R-Monument), Aaron Salt, who would go on to be elected to Academy School District 20’s Board of Education, and other Republican volunteers attempt to inspect party paperwork at the headquarters. El Paso County GOP Treasurer John Pitchford calls the Colorado Springs Police Department and accuses the group of trespassing. CSPD declines to pursue criminal charges as a result of the incident.

On Jan. 31, 2021, FEC United founder Joe Oltmann sends a late-night email to nearly the entire El Paso County GOP, accusing the party of racism for their failure to support Tonkins.

March 2021
During the Colorado GOP’s Central Committee meeting, former Secretary of State Scott Gessler loses his bid for state party chair to Kristi Burton Brown, who had served briefly as president of FEC United in 2020.

August 2021
Rep. Dave Williams (R-CO Springs) and Rep. Ron Hanks (R-Cañon City) hold an Aug. 4, 2021 town hall in Colorado Springs. Williams and Hanks repeat debunked conspiracies about elections. Williams claims dead people voted in the 2020 election in Colorado. Hanks suggests that Runbeck Election Services is involved in ballot harvesting. Williams tells the audience, “We are in contact with Joe Oltmann and his organization and he has given us a wealth of information.”

Colorado Springs City Councilor and former Colorado Secretary of State Wayne Williams is selected to run elections in Mesa County, following Mesa’s Clerk and Recorder, Tina Peters, coming under investigation for a security breach of election equipment. Williams’ position with Runbeck is spotlighted, and he is discussed on Oltmann’s Conservative Daily podcast.

October 2021
Treasurer John Pitchford tenders his resignation on Oct. 12, 2021, following concerns about finances stemming from the El Paso County GOP’s Lincoln Day Dinner. According to an undated message from Burton Brown, “On Oct. 12, Dr. John Pitchford resigned from his position as Treasurer of the El Paso County Republican Central Committee. … He did this when his request to hire an accountant to investigate discrepancies with the Lincoln Day Dinner was denied by the County Party Chairwoman, Vickie Tonkins. … His resignation was to become effective on October 21 so that he could stay on to train a replacement. Ms. Tonkins informed him she was not giving him the training time that he requested. To her, his resignation was effective immediately and he was to turn in the books and any party-related items in his possession. … Based on John Pitchford’s concern, Vice Chair Karl Schneider, also requested a full audit from Ms. Tonkins. … To date, she has refused to respond to his request. Our county bylaws are clear, the Executive Committee has a fiduciary responsibility for the finances of the Central Committee. As such, we, members of the Executive Committee, are concerned there could be discrepancies in the Lincoln Day Dinner records/accounts. We know this was a very successful dinner. It was attended by over 400 people with many auction items, and allegedly grossed approximately $50,000. All receipts should be properly accounted for.”

November 2021
Conservative candidates, including Salt and Sandra Bankes, sweep school board elections in El Paso County in Districts 11, 20, and 49. FEC United board member Dr. Rae Ann Weber, who was arrested during school board protests in August, loses her bid for Cheyenne Mountain School District 12’s board.

On Nov. 23, 2021, Schneider files an official campaign finance complaint with the Secretary of State regarding issues concerning the Lincoln Day Dinner.

December 2021
Schneider raises concerns about a change in venue ahead of a Dec. 6 El Paso County GOP meeting, from the party headquarters to Fervent Church, which also hosts FEC United meetings. Schneider tells KRDO in a video, “She’s also invited many of her friends in the FEC [United], a militia group, to attend. That’s concerning for me.”

During the meeting, Rex Tonkins, Vickie’s husband, is involved in a brief altercation with Sen. Larry Liston (R-CO Springs), who allegedly called Tonkins a “thug.” CSPD would investigate the incident and find no probable cause to charge Tonkins after Liston filed a report.

Rep. Andy Pico (R-CO Springs), writes in a Dec. 9 email obtained by the Colorado Springs Independent, “At a recent [meeting] of Faith, Education and Commerce (FEC) there were some astonishing accusations made against elected Republicans at various levels. The meeting was initially introduced by the Pastor [Garrett Graupner] who stated that he was on a ‘RINO [Republican in name only] Hunt.’ The featured speaker was our County Republican Party Chair, Vickie Tonkins. During her talk she spoke of challenging all of the elected Republican representatives at the City Council, County Commission, and State Legislature. She never mentioned our political opposition on the other side.”

“First, at the January 10, 2022, meeting of the El Paso County Executive Committee, Chairwoman Tonkins approved an agenda item and allowed the presentation of a scorecard that rates Republican legislators with letter grades based on very specific criteria considered by an outside organization, but not readily known by everyone viewing the scorecard,” wrote Burton Brown. “The presentation of this scorecard with its letter grades, combined with specific comments about how legislators should behave offered by Chairwoman Tonkins, gave the impression that she opposed some Republican legislators and supported others – an action that is improper during the primary.”

“Second, the State Executive Committee finds that it was improper for Chairwoman Tonkins to use county funds to contribute to FEC United. It is the State Executive Committee’s understanding based on the materials submitted by petitioners that FEC United is a 501(c)(4) organization that takes sides in Republican primaries, particularly in El Paso County. Since county officers are bound by primary neutrality – both in their own bylaws and according to Article III, Section C of the CRC Bylaws, a county party may not donate to an outside organization that is actively opposing or supporting specific Republican candidates during the primary. Doing so is a violation of primary neutrality requirements.”

February 2022
The extremist slate of “grassroots” candidates begins campaigning in earnest for the Republican nomination. On Feb. 15, Williams, running for U.S. House; Todd Watkins, running for El Paso County Sheriff; and Peter Lupia, running for El Paso County Clerk and Recorder, take part in a voter information session hosted by FEC United at Fervent Church. Tonkins moderates a Feb. 25 Republican candidate forum featuring Williams, Watkins, Lupia, and Hanks, running for U.S. Senate. Lindsay Moore, who ran unsuccessfully for Academy School District 20’s board of education, announces her intention to run for El Paso County Commissioner. Both the Feb. 15 and 25 events do not include any of the “grassroots” candidates’ primary opponents.

The Colorado Springs Gazette reports that Rebecca Keltie, who is running against Williams in the U.S. House race, has accused Tonkins of favoring the grassroots candidates. “It’s clear to me by the amount of events they are hosting who they are aligned with. … If you go to an event, it will be these four candidates all the time,” she tells the Gazette.

March 2022
Spunky Patriots, a “grassroots” political group, hosts candidates during their monthly meetings. The March event features El Paso County Commissioner Longinos Gonzalez, who is running for Colorado Springs Mayor in 2023, against Wayne Williams. Both Gonzalez and Moore, who also speaks at the event, attack their respective Williams opponent during their remarks.

Joe Oltmann brags about the assembly victory during a March 21 episode of Conservative Daily. “We were able to sweep entire assemblies with FEC United candidates,” he said. “Sweep ‘em, completely.”

June 2022
The June 28 primary results in an overwhelming defeat for the “grassroots” candidates favored by Tonkins. “My first official duty as the current — and future — El Paso County coroner is to officially declare the Top Line Candidates dead,” says a triumphant Dr. Leon Kelly during the primary watch party at Boot Barn Hall in Colorado Springs. “What do we hear from them now? Nothing. You know what that is? Silence. It’s also the sound when a bunch of RINOs kick the crap out of conspiracy theorists.”

Despite the loss, the “grassroots” candidates will go on to request — and fundraise for — recounts, and later lawsuits, which will be dismissed.

September 2022
Pitchford calls for the resignation of Sen. Dennis Hisey (R-Fountain) following controversy over his residency in Senate District 11, where he is running against Rep. Tony Exum (D-CO Springs).

Gonzalez calls for Williams to resign from City Council over controversy stemming from a public service announcement he filmed with Democratic Secretary of State Jena Griswold.

During an appearance on Richard Randall’s radio show, Tonkins says Republicans should “vote their conscience” during the election, instead of committing to vote for Republican candidates.

Rep. Tim Geitner (R-Monument), who has already revealed his plans not to run for reelection, announces his resignation effective Oct. 7.

“Grassroots” Republicans refuse to credential for an Oct. 29 House District 19 vacancy committee meeting, which will select a replacement for Geitner. Without a quorum, the committee is unable to select a replacement. Protesters falsely claim Geitner assaulted Pitchford during the Jan. 30, 2021 incident at El Paso County GOP headquarters, and that the DA refused to prosecute the incident. According to Republican 4th Judicial District Attorney Michael Allen, “The CSPD officers who responded to GOP headquarters on January 30, 2021, determined that no crime had been committed and accordingly never submitted their investigation to this office for review. It is important to note that the incident in question received extensive media coverage and it is clear that Mr. Pitchford never alleged an assault or any other form of physical contact when he made his report to law enforcement on January 30, 2021. The responding officers also reviewed surveillance video and found no evidence to support any criminal investigation, including for assault. Recent allegations of an assault made by associates of Mr. Pitchford are contrary to what actually happened at GOP headquarters on January 30, 2021. Further, allegations that this office refused to prosecute Representative Geitner are also false. There was no evidence to support a criminal investigation and the responding officers from CSPD never submitted the case to this office for review.”

Governor Jared Polis (D) will select a replacement for Geitner, to serve until Jan. 2023.