Let’s Get Back to Grey 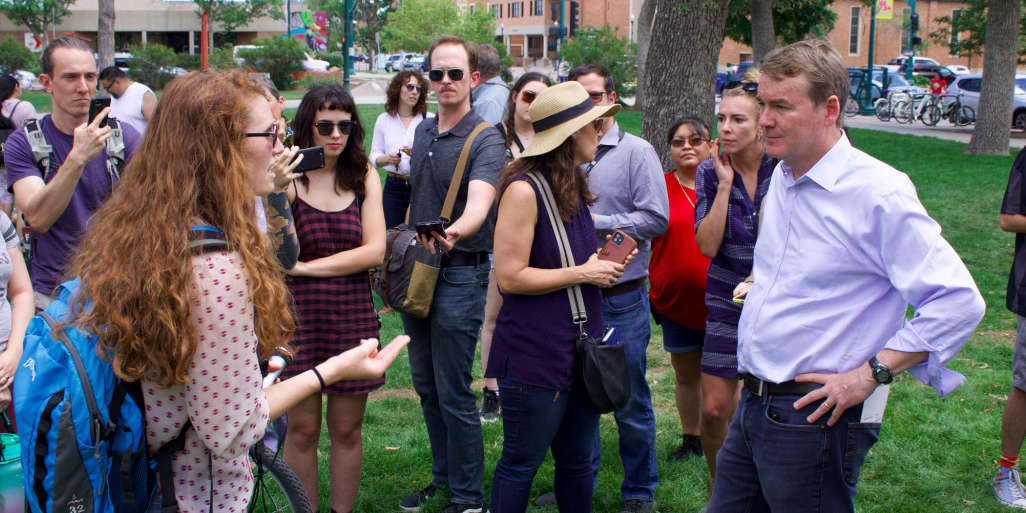 Following the primary elections in Colorado, local Democrats held a “Unity Rally” in Acacia Park in Colorado Springs Wednesday, headlined by U.S. Sen. Michael Bennet (D-CO). While Democrats are rallying supporters over the recent Dobbs Supreme Court decision, which overturned Roe v. Wade, members of the Democratic Socialists of America (DSA) are urging Democratic elected officials to take action to end the filibuster, the 60-vote threshold in the Senate needed to pass legislation, and expand the Supreme Court.

“You cannot give up on this democracy,” said Bennet to the approximately 50 supporters who gathered in downtown Colorado Springs. “If you give up on democracy, failure becomes a self-fulfilling prophecy. That is the only thing that will happen. There are a lot of reasons to give up. We have just lost the first fundamental, constitutional human right in American history. We just lost that, and the reason we lost that is when you have an economy that works only for the wealthiest people in the country and doesn’t work for anybody else, and people start to feel like they’re losing opportunity for their families, people tend to show up sometime and they say, ‘I alone can fix it. You don’t need a democracy. You should expect your public sector to be hopelessly corrupt. You should expect your private sector to be hopelessly corrupt. Might makes right. I don’t believe in the rule of law.’ That’s what Donald Trump gave us. What he also gave us, as a result of that, is three Supreme Court justices who created a majority that would have been unimaginable when I was in law school. Unimaginable to have stripped us of the first constitutional right we have ever lost.”

Bennet spoke at length about the dangers the Supreme Court’s 6-3 decision to overturn Roe v. Wade will have on the U.S. “When it comes to a woman’s right to choose, we cannot let the Supreme Court of the United States be the last word,” he said to applause. “They’re the ones who ignored how important this human right was to this country. They’re the ones who couldn’t appreciate what this freedom meant to women. They’re the ones who read the constitution as if it was written in 1868 when the 14th Amendment was passed, when women didn’t even have the fricking right to vote. They said it’s up to us, and now it is up to us. In Colorado, we already have made sure, because of [Rep.] Marc [Snyder’s (D-Manitou Springs)] leadership, and the leadership of the people up there, we’ve already made sure in this state a woman’s right to choose has been protected. We can’t wait to make sure that we’re codifying Roe v. Wade at the national level, and that’s what we need to do. In order to do that we have to elect pro-choice majorities in the United States Senate and the United States House, and across the country.”

In the last year, federal legislators have attempted to not just protect abortion rights, with the Women’s Health Protection Act, but to protect LGBTQ Americans — including transgender people who have faced increasingly hostile state-level legislation and executive orders this year — with the Equality Act, and to pass meaningful gun violence prevention legislation. All of those efforts have been stymied by the Republican filibuster in the Senate, often with the support of Democratic Senators Joe Manchin (D-WV) and Kyrsten Sinema (D-AZ).

As Bennet was departing Acacia Park’s bandstand, members of the Colorado Springs DSA, using their own portable microphone speaker, spoke out, asking Bennet, “Do you support ending the filibuster?”

A number of prominent members of the U.S. House of Representatives, including DSA-supported Rep. Alexandra Ocasio-Cortez (D-NY), have expressed support for ending the filibuster. This morning Rep. Diana DeGette (D-CO) tweeted, “If it’s abortion care or the filibuster, the filibuster must go.”

DeGette isn’t the only member of Colorado’s congressional delegation to support ending the filibuster. “A lot of this comes down to the filibuster, and now you know why I’m a proponent of abolishing the filibuster,” said Rep. Jason Crow (D-CO), when asked about legislative solutions for abortion rights and LGBTQ Americans. “There are so many extremely important issues, that are overwhelmingly supported by the America people, that have gone to the Senate to die, for exactly that reason. I think the times are changing.”

Today, President Joe Biden expressed support for making an exception to the filibuster in order to codify abortion rights.

Jacki, who identified herself as a co-chair of the Colorado Springs DSA, explained their presence at Wednesday’s event. “We are here to ask Sen. Bennet directly what his plan is to help us get our rights to abortion back,” she said. “Honestly, he let the rights slip away on his watch. That’s not OK. We’re here to hear, from his mouth, what his concrete plan is. Is he planning to end the filibuster? Is he planning to pack the courts to end the extreme partisan super majority that let this happen, that made this happen? Is he planning to codify the right to abortion for all Americans into U.S. Constitutional law? These are really concrete demands that we need. We need him to end lifetime appointments to the Supreme Court, so that we’re not being dragged back in time by people whose beliefs are outdated and, frankly, medieval. We need to make sure that progress is being carried forward by the youth, because it’s our futures that are at stake right now.”

While speaking with members of the press, Bennet explained that while he does not support ending the filibuster, he does want to reform Senate rules.

“I have long said that I think we should change the rules in the U.S. Senate,” he said. “I’ve long said that, and I think what my changes would be, if I were able to do it, which I think would work well for both parties, is to have prolonged and extended debate. We don’t have any debate anymore. The whole system was designed to have extended debate, to have the minority have the chance to offer amendments in a meaningful way, which they don’t today, and in the end have 51 Senators be able to make a decision, not just on choice but on anything.”

In December 2021, Bennet laid out his plan for Senate filibuster reform in an op-ed for The Colorado Sun. Bennet’s plan included “[flipping] the burden of delay by making the minority party produce 41 votes to continue debate, instead of requiring the majority to produce 60 votes to end it; [Guaranteeing] a real voice for the minority party by ensuring votes on a minimum number of amendments for both sides whenever legislation is brought to the floor; [Requiring] those who continue debate to actually hold the floor and talk, like ‘Mr. Smith Goes to Washington,’ instead of phoning it in from their office as they do today, and once both parties have made their case on the floor and had votes on their amendments, the Senate must be able to pass legislation with 51 votes.”

While Bennet railed against the Supreme Court’s decision and the fact that Trump was able to nominate three justices during his term, Bennet does not support expanding the court. In addition to the Dobbs decision, the court has also ruled, 6-3, to erode the separation of church and state, to loosen gun permit laws, and to limit the EPA’s ability to regulate carbon emissions, among other controversial rulings.

“I’ve said over and over again that I don’t support that [court expansion],” he told the press. “I don’t think the American people support that. I will, given time, want to consider the question of whether it makes sense to have term limits for justices, in the modern era. That may be a way of taking the temperature down and depoliticizing the confirmation process, but I haven’t reached a conclusion on that yet.”

For the DSA, that’s not enough. “His lack of courage is what led us to this moment right now,” said Jacki. “This happened on his watch and he’s asking us to come and vote for him again, but we need something real to believe in. We need the right to abortion as part of a larger package of health care, guaranteed to all Americans. We need universal child care, not just in a moment of crisis, but all the time.”

In November, Bennet will face Republican Joe O’Dea, who has said that while he does not support Colorado’s Reproductive Health Equity Act, he would not vote to overturn Roe, but he would have voted to confirm the judges who overturned Roe. During a June primary debate hosted by CBS4 and The Colorado Sun, O’Dea said he would not support abolishing the filibuster.

Editor’s Note: This story has been updated to provide more context regarding Bennet’s plan for Senate reform and O’Dea’s position on ending the filibuster.