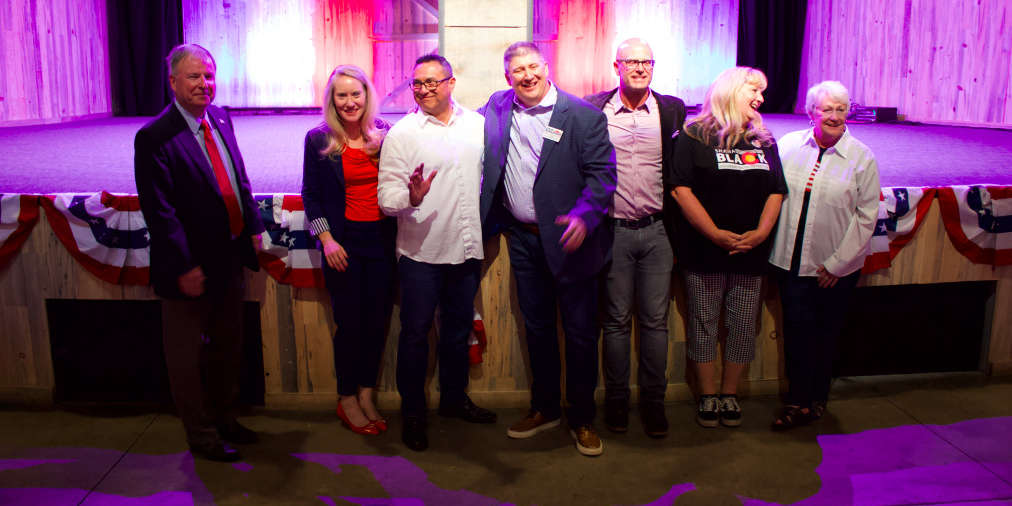 “My first official duty as the current — and future — El Paso County coroner is to officially declare the Top Line Candidates dead,” said a triumphant Dr. Leon Kelly during Tuesday’s primary watch party at Boot Barn Hall in Colorado Springs, referring to a group of hard-right Republicans who were selected by GOP activists at a statewide convention in April. “What do we hear from them now? Nothing. You know what that is? Silence. It’s also the sound when a bunch of RINOs kick the crap out of conspiracy theorists.”

Kelly, along with other El Paso County incumbents and “establishment” candidates, celebrated their victory over the slate of “grassroots” candidates, who were listed at the top of the GOP primary ballot due to their victory at the April convention and became known as the “Top Line Candidates.”

The 2022 primary election was a referendum on a host of issues championed by candidates backed by conservative activist group FEC United and its founder, Douglas County podcast host Joe Oltmann, who bragged in March about sweeping Republican county assemblies with far-right candidates who espoused conspiracy theories about the 2020 election and the COVID-19 pandemic. Many Republicans, like Kelly, felt the assembly process was manipulated by the Top Line Candidates and their supporters. Despite a lawsuit seeking to ban unaffiliated voters from participating in this year’s primary from Jan. 6 legal architect and University of Colorado visiting scholar John Eastman, voters — Republican and unaffiliated — overwhelmingly rejected the slate of extremist candidates.

“Over the past four years I’ve been honored to serve you, and I’m profoundly humbled to once again win the Republican nomination for county commissioner,” said El Paso County Commissioner Cami Bremer, who faced a challenge from businessman Dave Winney, the former Secretary of State candidate who switched races at the urging of QAnon influencer Juan O. Savin. Savin’s pick for Colorado Secretary of State, embattled Mesa County Clerk and Recorder Tina Peters, lost her race to Pam Anderson, who had been attacked during the primary for her position on the board of the Center for Tech and Civic Life, a nonprofit that has been the protagonist in various conspiracy theories around the 2020 election.

“Over the past year, all of us have faced tremendous headwinds from those in our own party who have spent their efforts recruiting fringe candidates that do not reflect the values of our community,” said Bremer, whose husband, former Olympian and El Paso County Republican Party Chair Eli Bremer, lost his bid for U.S. Senate to election denier and Jan. 6 attendee Rep. Ron Hanks (R-Cañon City), who lost his primary race to businessman Joe O’Dea.

El Paso County Commissioner Holly Williams won her primary against former Academy School District 20 Board of Education candidate Lindsay Moore, who criticized Williams for approving the county’s contract with Runbeck Election Services. Williams’s husband, Colorado Springs City Councilor Wayne Williams, is a senior advisor for the ballot-printing company, which in addition to being appointed by the Mesa County Board of Commissioners to handle elections following news that Peters was under investigation for breaching security protocol, has made him a target for election conspiracists.

“It feels really good to be victorious tonight,” said U.S. Rep. Doug Lamborn (R-CO), who beat a primary challenge from Colorado Rep. Dave Williams (R-CO Springs). Williams questioned the results of 2020 election and has been a staunch opponent of abortion rights in Colorado.

Williams has accused Lamborn, who was first elected to the U.S. House of Representatives in 2006, of lying about Williams’ record as a legislator and has filed a complaint with the 4th Judicial District Attorney’s Office. “I look forward to representing the space capital of Colorado and the country. I’m going to be working real hard on Armed Services [Committee], with my seniority, to make as many good things happen for our community as possible.”

Last month Lamborn appeared at The Road Church in Colorado Springs and discussed a legislative agenda that included investigating Joe Biden’s administration for a litany of grievances and stripping prominent House Democrats of their committee assignments.