By Erik Maulbetsch and Jason Salzman

In 2018, Democrats swept to power across Colorado to an extent that had not been seen since the New Deal. Republicans suffered losses in almost all competitive races and several races that they were expected to win.

In 2019, Colorado Republicans threatened dozens of recalls against Colorado Democrats and ultimately launched six recalls against the Governor, state senators, and state representatives. Five failed, while one Democrat resigned for unrelated reasons.

Now, there are only two Republicans left holding statewide office in Colorado–one is viewed as one of the most vulnerable U.S. senators up for election in 2020 and the other is a regent of the University of Colorado. The backslide has been precipitous. Maryland and Massachusetts, two of the bluest states in the country, have elected Republicans to statewide office more recently than Colorado.

How did Colorado Republicans end up here?​

There is no single explanation to how Colorado Republicans ended up here, but the search for the answer probably starts with the political consultants who have failed to deliver results for Republican donors in Colorado. These consultants serve as proxies for the power struggle behind the scenes between the Republican establishment and grassroots. This GOP infighting, which has become increasingly open and hostile, is widely seen as a big reason for the demise of the Republican Party in Colorado.

Who are the consultants that keep losing? 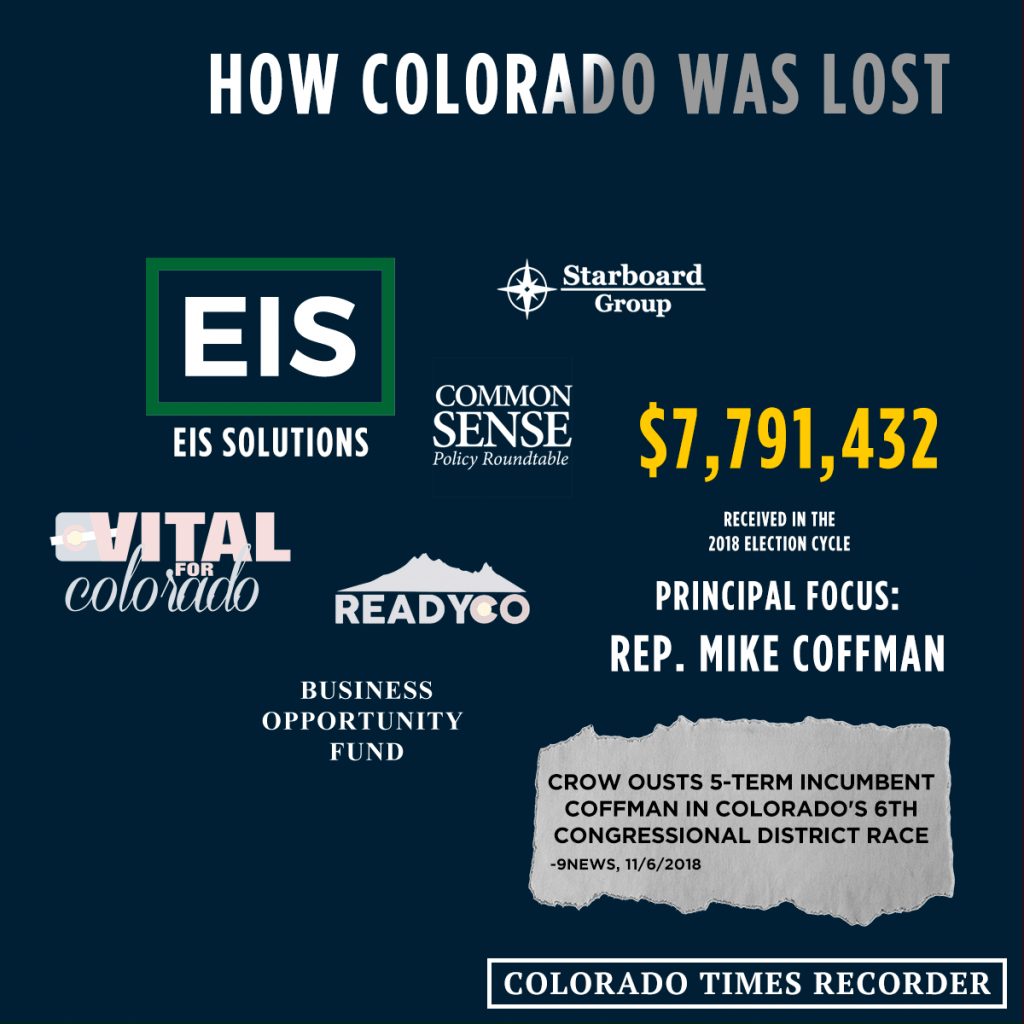 EIS Solutions is the most prominent Republican political consulting firm in Colorado. Along with its related firms, Ascent Media and Blitz Canvassing, the company has received millions of dollars for work on various conservative ballot initiatives and soft money campaigns, many on behalf of state senate Republicans. In October of 2018, one such independent expenditure committee, the “Better Jobs Coalition,” paid Ascent over one million dollars in just three days. Over the course of the 2018 election cycle, Congressman Mike Coffman’s campaign paid the trio of EIS firms over two million dollars for ads, field work and consulting. 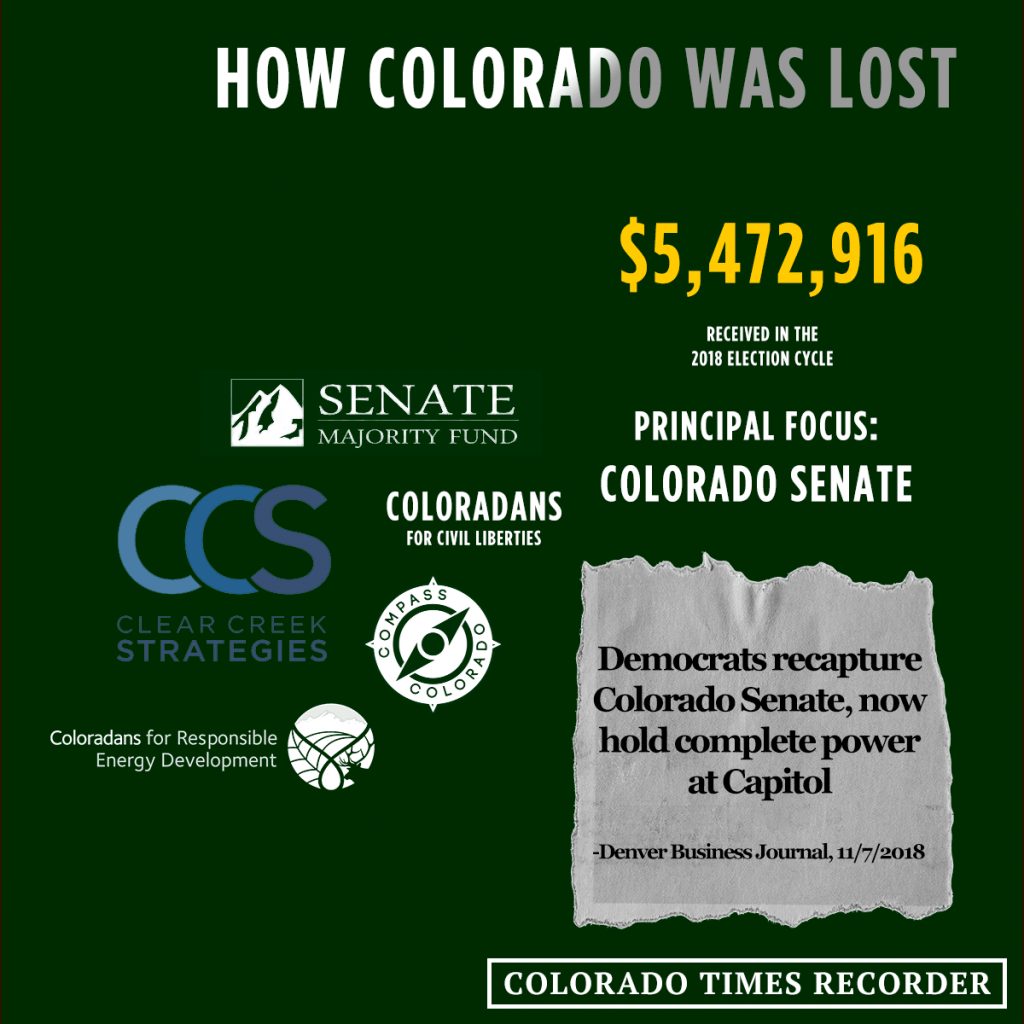 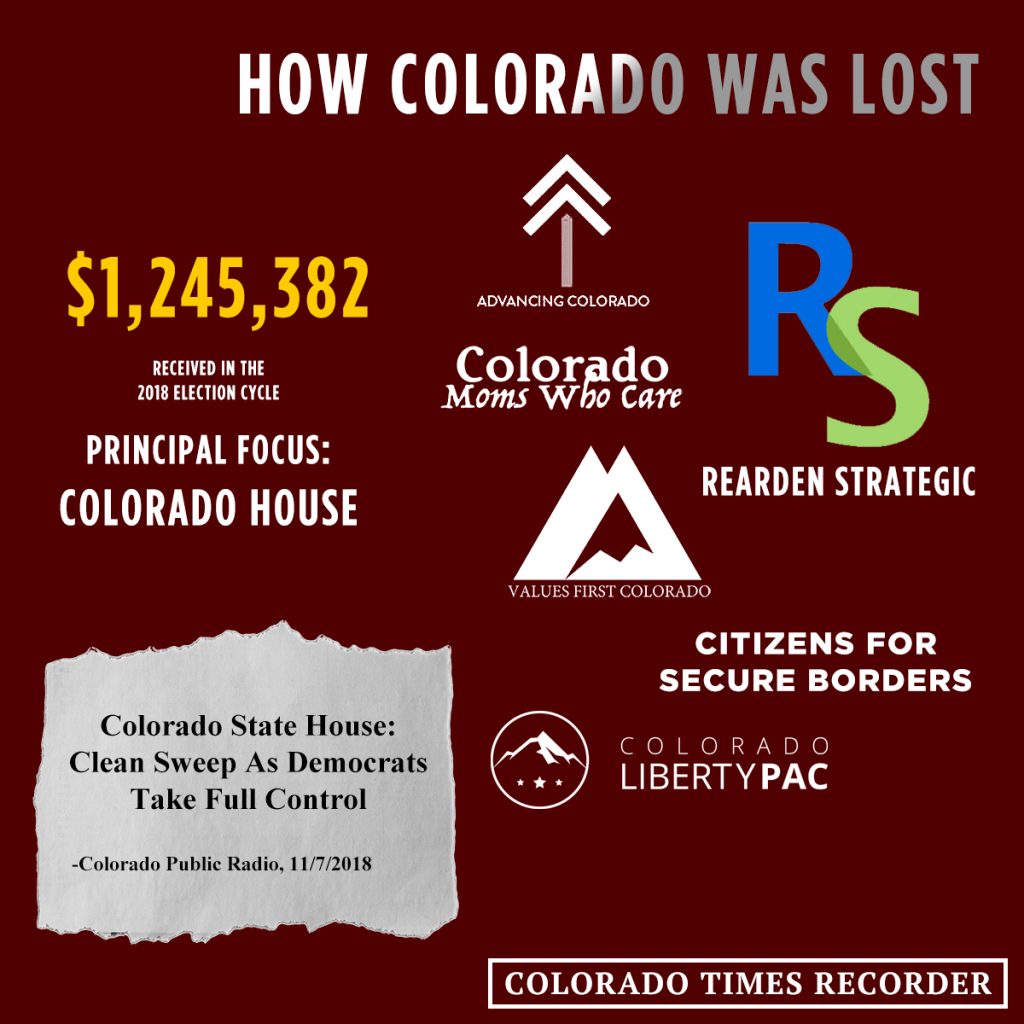 Rearden Strategic is in charge of “Caucus Funds” raised by House Republican Leader Patrick Neville. It’s run by Patrick Neville’s brother, Joe Neville, who doled out about $1.2 million to a collection of entities also controlled by the Nevilles: Values First Colorado, Colorado Liberty PAC, Advancing Colorado, Citizens for Secure Borders, Colorado Moms who Care, and Take Back Colorado. While these organizations have been involved in multiple campaigns, the principal goal of Rearden is to elect Republicans to the Colorado State House. The last election was a disaster for state House Republicans, losing four seats, leaving Democrats with a 41- 24 supermajority in the chamber, their biggest margin since 1959. And more embarrassment followed in the form of disastrous, failed campaigns to recall Democrats from office.

The Parallel Universes of Colorado Republicans 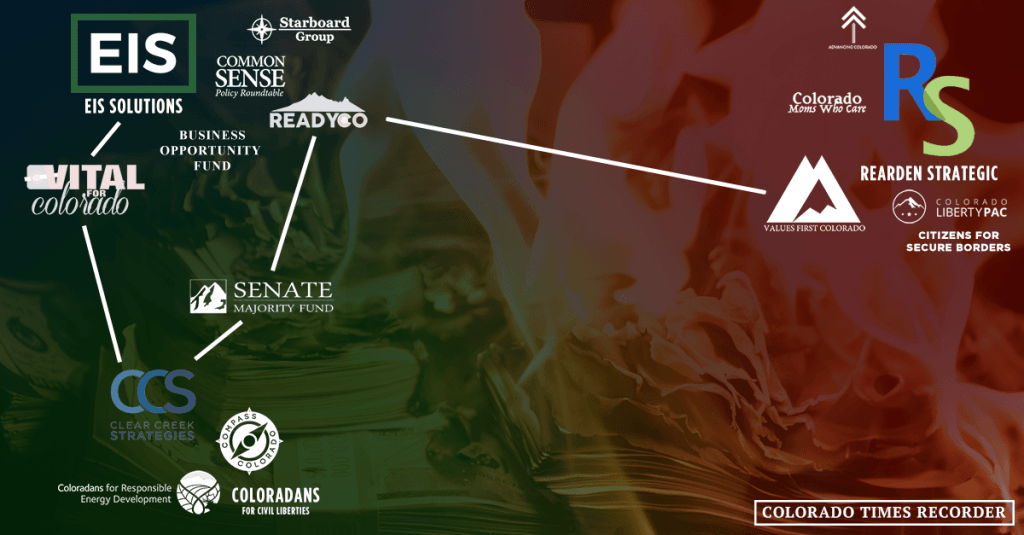 Disagreements and fights are part of politics, not just among political opponents, but also among political allies. But you don’t often see political allies routinely trotting out their grievances in public, insulting each other in front of innocent bystanders on social media, like members of the Colorado Republican Party have done in recent years.

Because of this, the alignment of three different political consultants often put the establishment and grassroots wings of the Republican party in each other’s crosshairs.

If you’re looking for actual proof of the depth of the intra-party disagreement, you should spend some time analyzing data about which Republicans actually hire one another, sit on boards together, or work at the same address. Much of this information is available in public records, and it shows a shocking divide between establishment Republicans and the grassroots wing, led by House GOP Leader Patrick Neville of Castle Rock.

Neville’s wing, presented in our Rearden Strategic graphic, has almost zero interaction with the two establishment wings of the Colorado Republican Party, represented in the Clear Creek Strategies and EIS graphics. Both Clear Creek and EIS have an orbit of firms (Starboard, Vital for Colorado, Business Opportunity Fund, etc.) and individuals that work together—and Rearden has its own completely separate orbit of organizations (Advancing Colorado, Colorado Liberty PAC, Citizens for Secure Borders, etc.) and individuals. Bottom line: establishment and grassroots Republicans in Colorado are operating in different worlds with little overlap.

Those are all establishment firms. (See the Clear Creek Strategies and EIS graphics below.)

None of these grassroots-wing entities (See Rearden Strategic graphic.) show any overlap (money, boards, or addresses) with the establishment GOP groups. To be fair, none of the ancillary Rearden groups are as robust as those organizations created by or working closely with EIS and Clear Creek. Rather they appear to be primarily online brands, most with bank accounts for political spending, but without the full-time staff or public board members of the more establishment groups like Vital For Colorado, or the Common Sense Policy Roundtable.

There’s one exception: That is, there’s one documented link between Ready Colorado, an establishment group created by EIS Solutions to advocate for a specific policy goal: increased public funding for charter and private schools, and Values First Colorado, the House GOP caucus fund controlled by Patrick Neville. Ready contributed $15,000 to VFC in 2018, and added another $350 last June.

It’s fair to say, over the past two years, Colorado hasn’t seen such an intense public display of criticism, hostility and even hatred among members of the same political party in living memory.

It’s been a cascade of threats, accusations, insults, and other public barbs that are certainly not unheard of, but of different order of magnitude than what’s seen among Colorado Democrats.

– Tyler Sandberg, in a now-deleted Tweet referencing the attempted recall of Tom Sullivan.

The resulting damage to Colorado Republicans is difficult to quantify precisely, but it’s clearly a huge distraction, making it all the harder to overcome substantive disagreements about tactics and policy.

Take the GOP debate about the attempted recalls of Democratic politicians, for example. Rather than engage in rational debate, even in public, some leading Republicans, like former U.S. Rep. Mike Coffman (R-CO) Campaign Manager Tyler Sandberg, took to Twitter with, “Great work taking a swing seat and making it safe for Democrats. Real Bang up job, guys.”

All this drama, and much more, plays out in full public view.

Yet, the story you come to expect from the El Paso County Republicans isn’t about cutting edge voter registration and mobilization efforts, but of chaos, threats, elite-versus-grassroots conflicts, lies, blame, and even blackmail.

Overall, the division with Colorado’s GOP leads to fundraising efforts and political campaigns and tactics that compete with each other, and are undoubtedly less effective, giving Democrats yet another element of advantage, even if it’s not decisive in itself, in a state that’s increasingly stacked against the GOP.

“It feels like I’m fighting a two-front battle constantly against these establishment Republicans and then the Democrats,” Neville said. “If they could spend as much time and effort fighting the Democrats as they do myself and other conservatives, we’d be in a lot better place in Colorado.”

Of course, he blames the infighting not on himself, but his GOP establishment opponents. And so it goes.