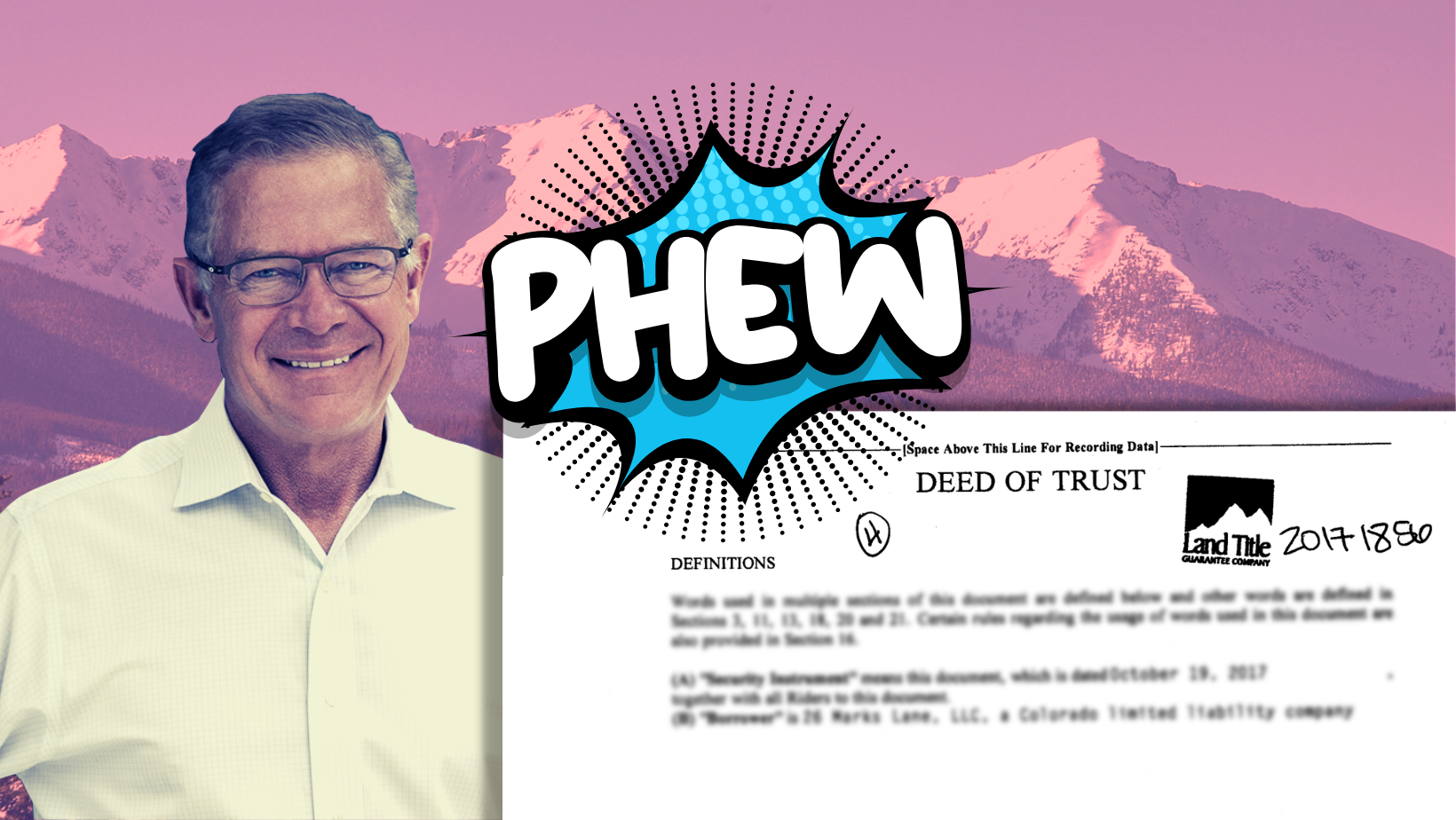 Republican state Senate candidate Tim Walsh broke the law by not disclosing a $3 million mountain home, but he won’t face any fine or penalty for his omission, according to a recent ruling from the Colorado’s Secretary of State’s office. Though it’s rare for a single campaign finance complaint to upset several years of established legal interpretation, that’s exactly what happened when the Deputy Secretary of State handed down a decision in the Walsh case overturning four years of incorrect legal precedent established during former Secretary of State Wayne Williams’ tenure in office – after applying it to Walsh one last time.

In the stunning 19-page ruling, Deputy Secretary of State, Christopher Beall, explained that a precedent established during the previous administration required him to dismiss the complaint against Walsh; then, in the same ruling, Beall invalidated the flawed precedent and declared that similar violations would “henceforward be subject to the administrative enforcement authority of the Division.”

The decision is double-edged – letting Walsh slip out the side door and then closing it behind him – but represents a major change in the legal requirements for personal financial disclosures, and for the Secretary of State’s ability to enforce violations of the Fair Campaign Practices Act.

The saga started in February, when Walsh declared his candidacy for the state Senate seat. When a candidate files to run for office, they are required to submit a personal financial disclosure, and filing a late, incomplete, or inaccurate disclosure form is a violation of Colorado law. When Walsh submitted his personal financial disclosure in February, he submitted it in a timely manner but left out a handful of substantial financial holdings. According to public records, Walsh omitted his ownership of a $3 million home in Breckenridge, and two other financial instruments.

In September, progressive group ProgressNow Colorado filed a complaint against Walsh for the omissions. Under Colorado law, the Secretary of State’s office is responsible for administering campaign finance law, including the Fair Campaign Practices Act. ProgressNow’s complaint alleged that Walsh had filed a false or incomplete personal financial disclosure, and that doing so was a violation of the Fair Campaign Practices Act.

As the Times Recorder has reported in the past, Colorado’s system for governing personal financial disclosures is full of holes. Crafted in the 1970s and hardly updated in the fifty years since, the disclosure system requires candidates and officeholders to file an annual report of their assets, properties, debts, and other financial entanglements, and deems it unlawful to submit a false or incomplete disclosure form. The submitted forms, however, are never audited for accuracy or completeness, and omissions are common.

The disclosure system’s lack of an enforcement mechanism has had other effects: because it is rare for anyone to be caught in the law’s toothless jaws, the state’s legal and administrative apparatuses for interpreting the law and applying it to different cases are rusty from disuse.

That disuse is why it took four years for the Secretary of State’s office to realize that they have been interpreting the law wrong – because they haven’t had to interpret it since 2018, when the previous Secretary of State, Republican Wayne Williams, was in office.

When ProgressNow filed their complaint against Walsh, seemingly the first campaign finance complaint pertaining to a personal financial disclosure since 2018, those apparatuses were fired-up for the first time in four years and put to the task of assessing whether or not the omissions on Walsh’s financial disclosure constituted a violation of the Fair Campaign Practices Act, and it was in that process that the mistake Williams’ office had made became clear.

This is where things get complicated.

During the 2018 election cycle, Williams’ Secretary of State’s office adjudicated two separate campaign finance complaints pertaining to the personal financial disclosures of candidates on that year’s ballot. Those cases, Salzman v. Stapleton and Cook v. Staiert, respectively, involved the Colorado Times Recorder Editor-in-Chief Jason Salzman, as a complainant in one and Tim Walsh’s attorney, Suzanne Taheri née Staiert, as the defendant in the other. Both cases revolved around the contents of a candidate’s financial disclosure, both complaints were filed against Republican candidates, and both complaints were dismissed by Williams’ office on legal grounds now deemed spurious.

Here’s the legal wrench in the works: the personal financial disclosures filed by candidates and elected officials are governed by two separate parts of Colorado Law, the Fair Campaign Practices Act (FCPA) and the Public Official Disclosure Law (PODL). The Secretary of State’s office only has jurisdiction over one of them.

The Public Official Disclosure Law governs disclosures by elected officials, and includes the list of assets and obligations which must be disclosed. The Fair Campaign Practices Act, on the other hand, specifically governs disclosures made by candidates, and does not include a specific list of what is required to be disclosed (but provides a statutory reference to the list contained in the Public Official Disclosure Law).

In last week’s ruling, Deputy Secretary of State Beall, who holds the same role under Secretary Griswold as Taheri held under Secretary Williams, concluded that the interpretation made in 2018 was seriously flawed.

“In this context, the Division’s position would lead to a result where an essentially blank form that is filed on time would not form a basis for campaign finance enforcement,” Beall wrote of the reasoning behind the 2018 decision. “Such an outcome is not what was intended under the Colorado Constitution or the FCPA.” In other words, if the decision made in 2018 was accurate, candidates could file blank disclosure forms and face no consequences as long as their blank forms were filed on time.

All told, thirteen pages of the ruling are dedicated to dismantling the reasoning put forward by Williams’ office in the 2018 cases, ultimately concluding that the two rulings were incorrect.

Then, he dismissed the complaint against Walsh anyway.

“Despite the incorrect holdings in Salzman and Cook,” he wrote, “the view that an incomplete financial disclosure is not a campaign finance violation has remained the Division’s position for more than four years, including through two intervening election cycles.” In layman’s terms, the fact that the Secretary of State’s office has been misinterpreting the law for the past four years and two elections has “likely caused [candidates and campaign staff] to believe, erroneously as it turns out, that the only risk from a timely but incomplete PFD is the unlikely possibility of a criminal misdemeanor prosecution by a District Attorney.”

In other words, Beall dismissed the complaint against Walsh because of the precedent set by the 2018 cases. Because of Williams’ office’s rulings in those cases, Beall argues, candidates have come to believe, wrongly, that they cannot be punished for filing false or incomplete financial disclosures, and can only be punished for filing late ones. Because the department gave this false impression, he says, “it would be an abuse of discretion for the Deputy Secretary to now seek to apply a strict liability regulatory requirement to Mr. Walsh.”

Beall is not wrong about that. Precedent is well-established in common law. While the law is on the side of the complainants, the precedent is not, and Beall’s decision is that, in this instance, precedent wins.

He did not leave it there, though.

The ruling’s most far-reaching impact comes from its final pages, in which the Deputy Secretary of State makes it clear that the precedent set by Williams’ office will no longer be in effect after Walsh’s case. “This adjudication,” he writes of the Williams era precedent, “cannot henceforward remain the continuing approach of the Division with respect to this issue.”

In the ruling’s conclusion, Beall goes further, directing the Elections Division to “commence rulemaking proceedings” and making it clear that future violations will be subject to the Secretary of State’s enforcement authority under the Fair Campaign Practices Act.

Though the dismissal is sure to be a blow to those hoping that the complaint would hurt Walsh’s chances in one of the year’s closest-watched legislative contests, and though there is ample room for griping that Walsh got off easy through no doing of his own, Beall’s ruling in the case may bode well for transparency in Colorado in the longer term. Though it is a small patch on a large gap, the ruling closes a loophole, and may serve to end an era in which personal financial disclosures – at least those filed on the campaign trail – have rarely been worth the paper they are printed on.

As to how the ruling will ultimately manifest in future complaints, that remains to be seen. If the past is any guide, though, Coloradans should have some indication of the law’s future trajectory the next time it comes up in four to six years.