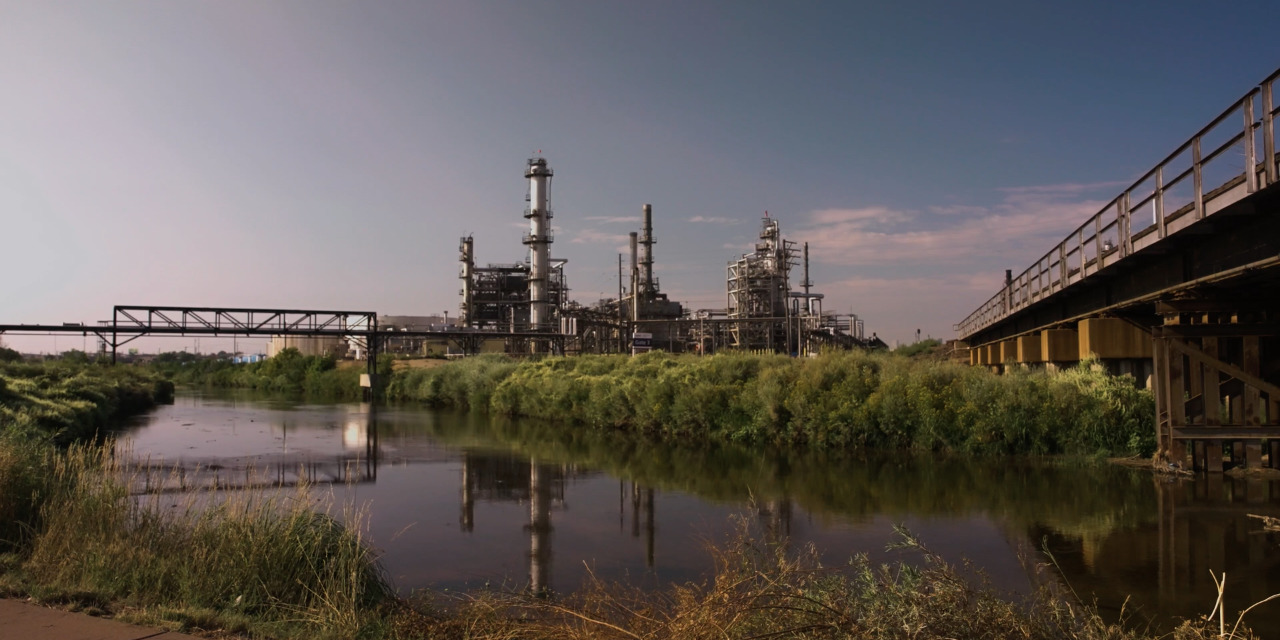 Earlier this month, a coalition of environmental advocacy groups asked Colorado’s air quality regulatory agencies to deny a proposed air pollution permit submitted by Suncor Energy for its petroleum refinery located in Commerce City, north of Denver. The groups argued that the permit does not adequately ensure a decrease in pollution from the embattled refinery.

The Colorado Department of Public Health’s Air Pollution Control Division (APCD) and Air Quality Control Commission are both reviewing a Clean Air Act Title V permit submitted by Suncor that, as of the latest draft, would allow the refinery to increase its annual emissions of toxic pollutants.

During an APCD meeting for public comment earlier this month, Earthjustice, an environmental law advocacy group, submitted comments critical of the draft permit from the Elyria and Swansea Neighborhood Association, Colorado Latino Forum, GreenLatinos, Center for Biological Diversity, and the Sierra Club.

Ian Coghill, senior attorney for the Earthjustice Rocky Mountain Office, explained why the environmental groups were asking the APCD to deny the permit.

“In our comments, we ask the Division, first and foremost, to deny the permit because Suncor has shown that it cannot comply with its emissions limits and modeling shows that Suncor is violating National Ambient Air Quality Standards for both nitrous oxides and sulfur dioxide,” Coghill said.

Suncor’s Commerce City refinery has been operating outside of state air quality permits since 2011 and has polluted the environment of Commerce City as well as Globeville and Elyria-Swansea, the two neighborhoods surrounding the refinery. In 2021, Suncor reached a $9 million settlement with the state for repeated violations of state and federal air pollution laws.

The federal Clean Air Act requires the Environmental Protection Agency (EPA) to set National Ambient Air Quality Standards for six air pollutants that are harmful to public health and to the environment.

Ean Thomas Tafoya is a human rights activist who works as the Colorado state program director for GreenLatinos, a national environmental advocacy group. Tafoya is also running for mayor of Denver in 2023.

Tafoya explained how pollution from the Suncor refinery compounds with other pollution sources to negatively impact its surrounding community.

“Suncor has a really outdated facility which allows flaring and it continually malfunctions which allows for the releasing of gases into the community,” Tafoya said. “Similar to what we’ve seen a couple of years ago with the yellow smoke but it’s also releasing hydrogen cyanide and benzene that are firing out of the refinery. But it also has water problems, both with PFAs and benzene leaking into the Platte River there. So that’s really concerning. In addition to that, they also create truck traffic and so moving their goods in and out and the diesel truck emissions are also adding to the pollution.”

The APCD’s director, Michael Ogletree, emphasized the importance of this permit in a statement released earlier this month.

“This permit is important because it will increase the division’s enforcement authority over Suncor,” said Ogletree. “We’re grateful that the community has engaged in the permitting process. We feel it’s vital to take their ideas and concerns into account when setting requirements for how Suncor can operate.”

According to APCD’s statement, the current permit draft includes multiple ways that emission monitoring data from the plant is regularly updated and made accessible to the community. Suncor would also be required to explain any increase in emissions.

Suncor has also said that it has installed new technology designed to decrease the pollution it releases in its surrounding community.

However, the draft permit allows for an increase in the amount of nitrogen oxides, carbon monoxide, volatile organic compounds, and particulate matter emitted by the refinery but does require a slight reduction in the amount of sulfur dioxide released. These are all compounds that can be harmful to air quality.

Ramesh Bhatt, chair of the Colorado Sierra Club Conservation Committee, said he was disappointed in the state’s permitting process.

“Suncor is located in the middle of a disproportionately impacted community that has suffered for decades from toxic pollution,” Bhatt said. “It has repeatedly demonstrated that it is unable to meet Clean Air Act requirements. It is unfortunate that despite this history, CDPHE is refusing to follow EPA’s direction to conduct proper analyses and is finalizing permits that will allow Suncor to emit even more pollution than the current limits.”

In response to the draft permit, community activists have highlighted their concern with the lack of transparency from Suncor surrounding the refinery’s emissions.

“If the Division were to grant a renewal, it must resolve several flaws in the permit,” Coghill said. “These include that the Draft Permit substantially underestimates emissions from Suncor by relying on generic emission factors instead of requiring Suncor to test for and continuously monitor all of the emissions from its stacks and flares. Also, the Draft Permit seeks to approve various so-called ‘minor’ modifications that increase emissions without adequately evaluating their impact on air quality or whether those modifications should be considered ‘major’ and subject to stricter emissions controls.”

Coghill explained that the EPA raised similar concerns with another Suncor air quality permit earlier this year. Earthjustice’s full comments on behalf of the Colorado environmental advocacy groups total over 100 pages and can be read here.

In March, the APCD submitted an air quality permit for Suncor’s Plant 2 section of the Commerce City refinery. Suncor is required to have two distinct permits because the plants were originally under separate ownership.

In response to this permit, the EPA told the APCD that it had concerns with sections of the Plant 2 permit that exempted flaring sources in the refinery from emission monitoring requirements and recommended improvements to the environmental justice aspects of the permit.

According to Coghill and the environmental groups, these concerns were not adequately addressed in this permit draft currently being reviewed by the APCD.

In response to the EPA after it raised concerns, the APCD submitted its proposed air quality permit for Plant 2 on June 22, which meant the EPA has a review period that ends on August 7.

Suncor’s Commerce City refinery is the only refinery in the state and provides fuel to Denver International Airport as well as 90% of the asphalt used in public road building projects in Colorado.

The refinery’s history of rampant pollution has led to a wave of community activism in the areas surrounding the refinery in the past half-decade.

But Tafoya explains how a report released in May, which he co-authored with GreenLatino and members of the University of Colorado School of Public Health, found a total of 183 facilities with at least one documented EPA violation over the past three years in the North Denver area.

“Suncor gets a lot of the attention and I think rightfully so because it can explode,” Tafoya said. “It’s flaring emissions into the community and it’s clearly contributing to the climate crisis. But it really takes the brunt of the coverage. I would love for people to look at the report to see that there are many bad actors here. Cumulative pollution is a real thing.”

An example of another polluter in the North Denver area is Xcel’s Cherokee gas plant, which the Sierra Club described in a 2021 report as a “textbook example of environmental racism.”

Suncor’s 2022 first-quarter profits were the highest in the company’s history, which is part of a larger industry trend where, in the midst of gas price increases and supply-chain issues, oil and gas companies are prioritizing positive cash flows to shareholders.

Denver is concluding its hottest July on record this week, a month that featured multiple ozone action alert days.

But Tafoya, while still motivated to help drive environmental reform in Colorado, sees reason for optimism.

After taking public comment into consideration the APCD will create a final permit draft to submit to the EPA, which then has 45 days to respond.