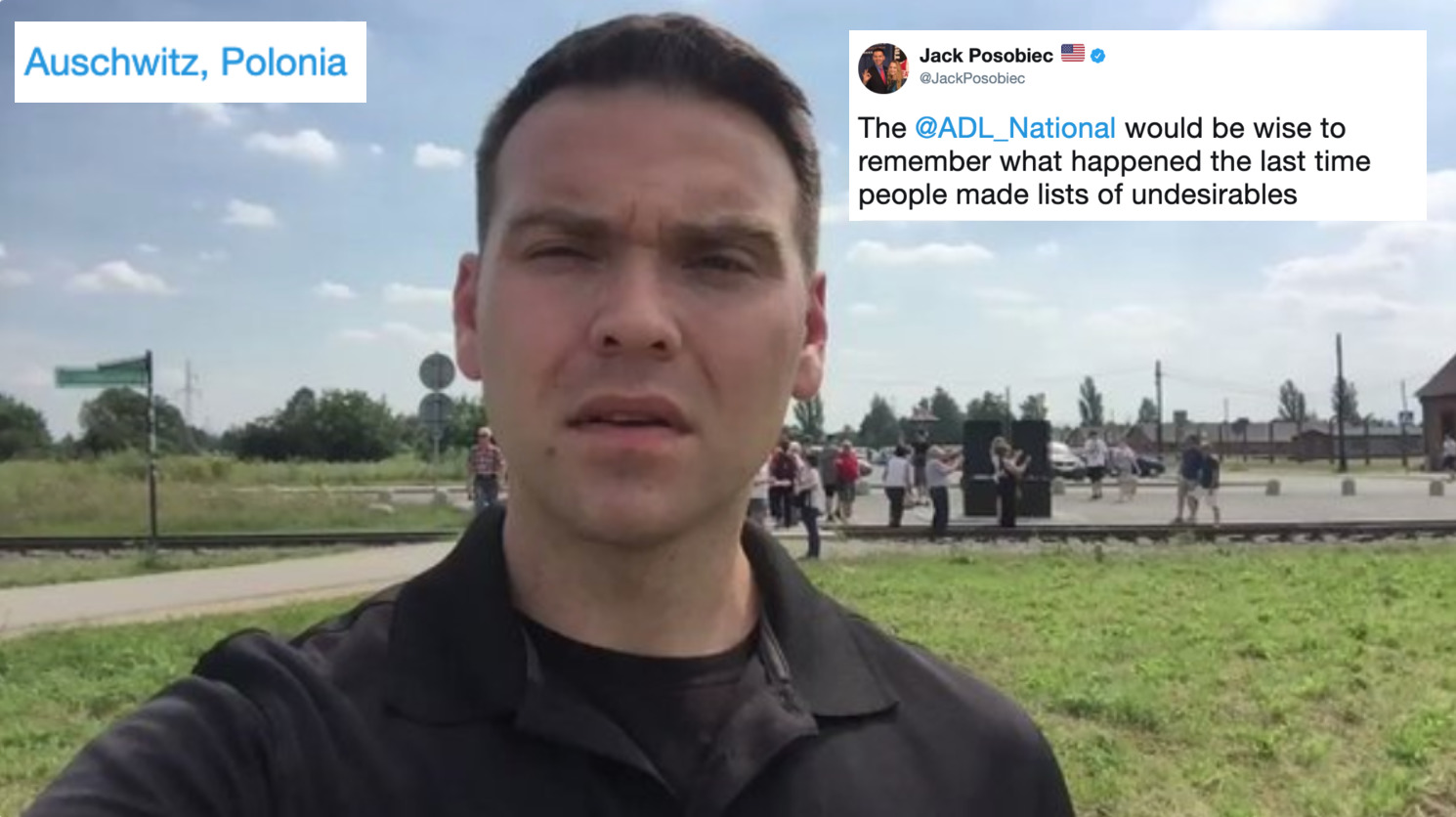 Posobiec repeatedly used the “echo,” adding (((triple parentheses))) to a person or group of people in a tweet, a meme popularized by white supremacists in 2016 to target Jews.

More recently, Posobiec used the Boulder grocery store shooting to promote false anti-immigrant sentiment. He falsely claimed on Twitter that the man who murdered ten Coloradans including a police officer immigrated to America as part of an Obama-era refugee program. Politifact debunked his statement.

Posobiec is also an enthusiastic election fraud conspiracist. He tweeted the #StopTheSteal hashtag numerous times up to and after the 2020 election. Following the Jan. 6 insurrection Posobiec deleted all of those tweets.

The Anti-Defamation League, which Posobiec once taunted in a selfie video he filmed at Auschwitz, documented Posobiec’s participation in a 2019 “independence” march in Poland that openly featured numerous antisemitic and white supremacist groups.

“…the event is known for its strident nationalism. White supremacist banners, expressions of anti-Semitism, and anti-Muslim and anti-LGBTQ+ sentiment have been witnessed in past years…The conspiracy theorist and author [Posobiec] …tweeted a photo of himself holding a baby, apparently in the midst of the Warsaw march.”

In that tweet, Posobiec was amplifying Ashley St. Clair, a former Colorado Springs college student and one-time intern for prominent Colorado Republican fundraising firm Starboard Group, who in 2019 was fired as a “brand ambassador” for Turning Point USA after Right Wing Watch’s Jared Holt reported on photos of her partying with white nationalists at an alt-right gathering in Florida. Turning Point is apparently less concerned with Posobiec, who is listed as a contributor to their site. Jeff Hunt serves on Turning Point USA’s Advisory Council.

Posobiec’s book features stories supposedly from “inside” Antifa. Posobiec’s credibility is questionable however, given his long track record of pushing disinformation, most prominently the “Pizzagate” conspiracy that was the precursor to the QAnon conspiracy and led to a man firing an assault rifle in a Washington D.C. restaurant.

The Centennial Institute at Colorado Christian University was established in 2009 and is directed by Jeff Hunt. Two of the Centennial Institute’s strategic priorities are to “be seekers of truth” and to “debunk ‘spent ideas’ and those who traffic in them.” According to its website, the institute “works to enhance public understanding of the most important issues relating to faith, family, and freedom.”

Jeff Hunt did not immediately respond to a request for comment via Twitter direct message. This article will be updated with any response received.