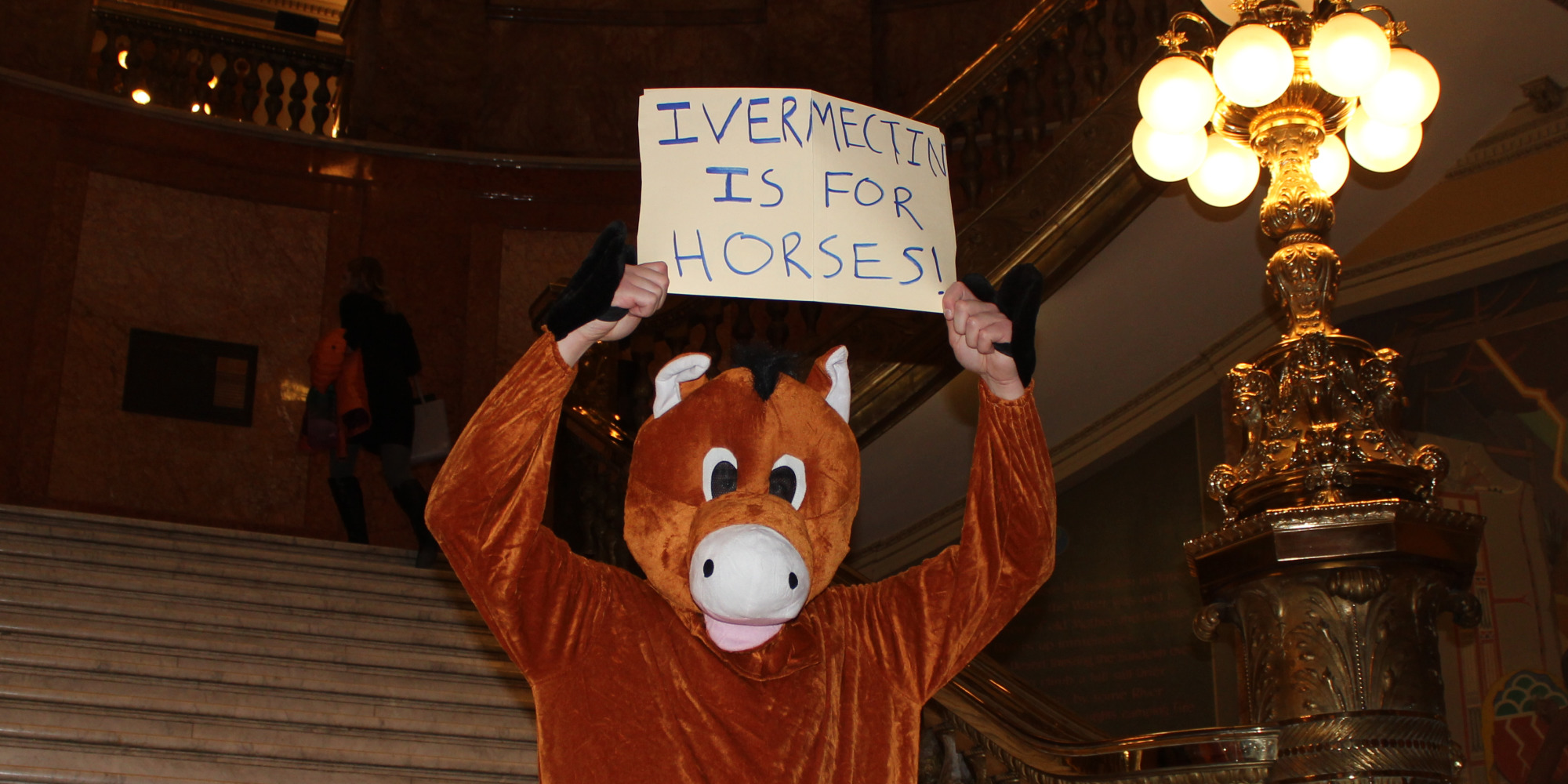 This afternoon at the Colorado Capitol, a few hours before Colorado lawmakers were set to discuss a controversial GOP-backed measure that would clear a legal pathway for doctors to write off-label prescriptions for unproven COVID-19 treatments, including for ivermectin – an anti-parasitic medication primarily used in animals and livestock – an activist from ProgressNow Colorado, who dressed as a horse, turned heads as he stood on the Grand Staircase, carrying signs that read, “Ivermectin is for horses” and “Hooves off my horse paste.”

“They’ve got to keep the ivermectin for us horses,” announced the protester, who later identified himself as Ethan Black. “To everyone who wants to take my horse medicine, I say, neigh! I’m the one giving the horse shit, okay? It should not be coming from a human.”

His performance got smiles and laughs from several passersby. A few expressed support and appreciation for his message. The protester said the response up to that point had been mostly, but not entirely, positive.

“We got one guy who said, ‘I think you’re seriously mistaken.’ But you know, I think he’s the mistaken one,” said Black. “You can get a vaccine, you know?”

Standing alongside Black was Summer Nettles, also with ProgressNow. Nettles stressed the urgency of promoting medications that are proven to work as COVID continues to spread.

“El Paso, Denver, Arapahoe, and Douglas Counties are the counties with the most continued spread of COVID-19,” said Nettles. “People actually need to take the vaccine, and spreading misinformation [when there are still so many COVID cases] is a problem.”

From the Grand Staircase, the activists proceeded down to the Capitol basement where people were sitting, working, and talking at tables.

On their way downstairs, the pair were stopped by a Capitol security guard, who said protest signs normally aren’t allowed inside the building. He warned the two not to put the signs in front of any legislators or bring them into committee rooms.

As they emerged from the stairwell in the basement, the activists were again mostly met with amused laughs. But as they began to engage with the crowd, several women spoke out in defense of ivermectin.

“Go to the [National Institutes of Health] website,” one woman said. “They do recommend ivermectin for COVID-19. Do you want me to get [the website] for you?”

Black responded by saying that there were “a lot of problematic studies” that had been done on ivermectin. But another woman continued to insist that there was evidence that ivermectin was effective for COVID.

“There have been ivermectin studies done around the world,” the other woman fired back. “Which study are you referring to?”

There have been a number of studies supposedly supporting ivermectin as a treatment for COVID. However, experts generally agree the existing studies are weak, methodologically flawed, and potentially even misleading. In any case, there is not yet convincing evidence that ivermectin is safe or effective as a COVID treatment.

Still, the women continued debating with the protesters, undeterred.

Nettles pushed back on one woman’s claims of ivermectin’s efficacy. When asked how she knew, Nettles stated that her mom was a nurse who treated patients with COVID.

“You’re citing your mom, not research?” the woman said.

The debate continued for several more minutes before the activists disengaged and proceeded to go outside, eventually landing on the West Steps of the Capitol.

There, the activists spoke with with a few more passersby, including one woman – Erin Meschke of Boulder – who on March 2 had testified in support of a failed “natural immunity” bill that aimed to exempt people previously infected with COVID from employers’ vaccine and testing mandates.

UPDATE: The bill proposing to legalize ivermectin prescriptions for COVID was heard by the House Health and Insurance Committee late Wednesday, and witness testimony continued into the early hours of this morning. The committee killed the measure in a 4-7 vote along party lines, with all Republicans supporting and all Democrats opposing the bill. (Updated Thursday, March 17 at 8:51 am MDT)