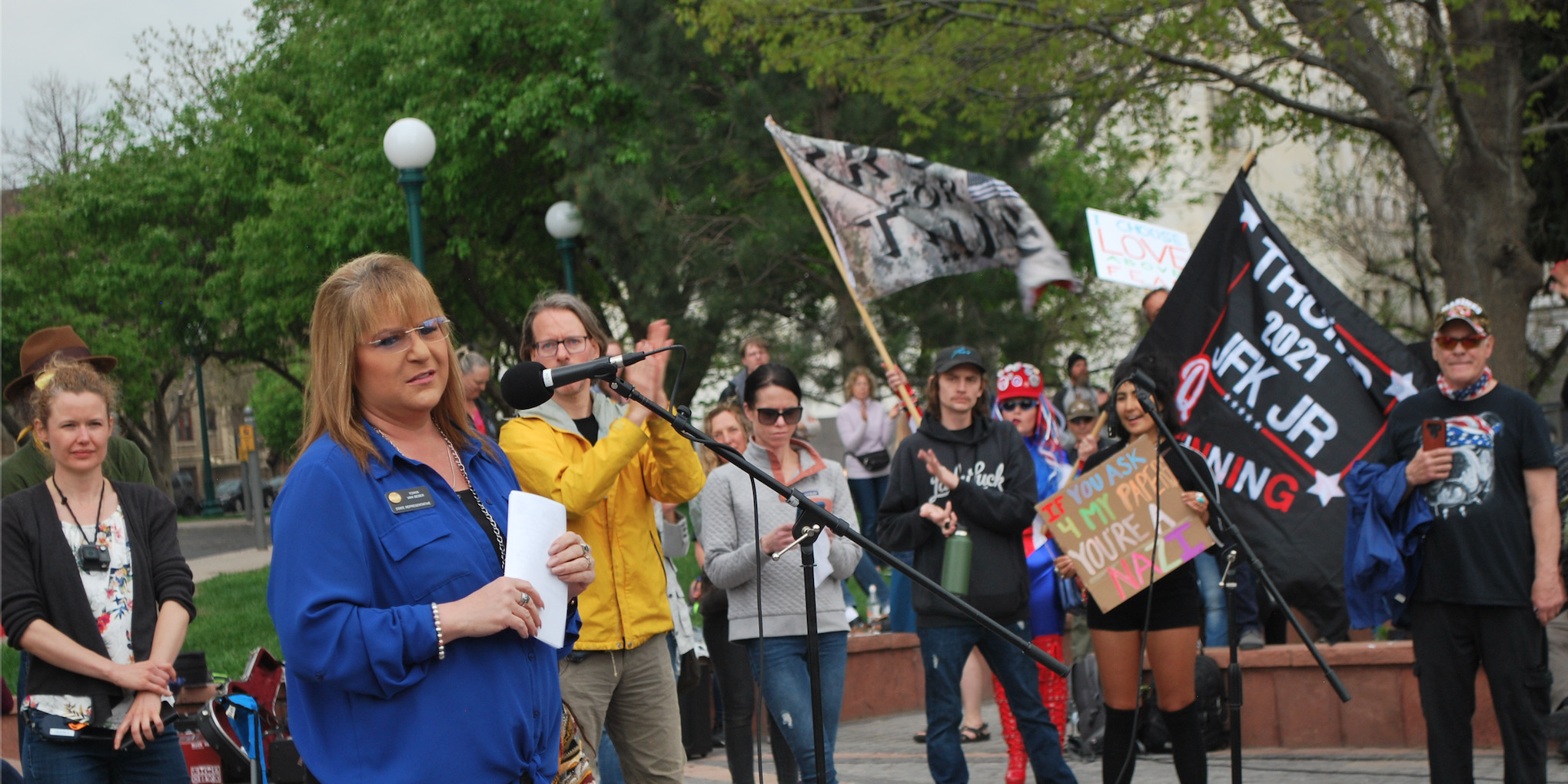 Speaking to a crowd of anti-vaccine activists and QAnon followers at Saturday’s Worldwide Rally for Freedom, Colorado state Rep. Tonya Van Beber (R-Eaton) told the conspiracy theorists, “I’m begging you! I’m imploring you! You must continue to broadcast the facts!”

Organized by Colorado Rising Up, a state chapter of the global “Worldwide Demonstration Movement,” the event, which focused largely on anti-vaccine and anti-mask messages and attracted about 250 anti-vaccine activists, conspiracy theorists, Trump supporters, and militia members to the Colorado Capitol.

Some of the falsehoods asserted by participants in yesterday’s QAnon-linked Rally for Freedom include: Vaccines are far more dangerous than the diseases they are intended to prevent. The coronavirus was created intentionally by Bill Gates in order to infect the world’s population with the vaccine. There is no such thing as public health.

Van Beber lambasted Democrats for voting down her bill that would have banned employers- including hospitals and other health care providers- from requiring employees be vaccinated. She framed it as preventing discrimination and, quoting Orwell, predicted that its failure proves state is now on a path towards tyranny.

While Van Beber and the other speakers focused on anti-vaccine and anti-public health conspiracies, there was plenty of non-healthcare misinformation as well.

At least two attendees wore hats with the phrase “Stop the Steal,” which refers to the conspiracy that the 2020 election was stolen from rightful winner Donald Trump.

One rally attendee explained that her sign, which read “Simpsons 911 1997. Contagion 2011,” was intended to convey her belief that the Simpsons cartoon knew about 9-11 in advance and that the movie Contagion, the plot of which does include many elements similar to the pandemic, is proof that the coronavirus outbreak was planned.

All of those conspiracies pale in comparison to the claims made by another attendee, Micki Lynn Larson-Olson, aka QPatriot, who in addition to a full QAnon costume, carried a flag stating  “TRUMP * JFK JR 2021 Q Winning”

Larson-Olson believes John F. Kennedy Jr. is not only still alive but in fact the true vice president of the United States, working secretly with Trump, who remains president.

So then what about President Joe Biden?

“Joe Biden is dead, that’s an actor in a Biden mask,” she said. “You can tell because his eyes are a different color now.”

QAnon conspiracies have proved disturbingly popular among Colorado Republicans. Congresswoman Lauren Boebert is the most prominent official to have publicly promoted the group’s messages, but not the only one. Former statehouse candidate Vanessa DeMott promoted one of the most extreme conspiracies- that an online furniture company was actually selling children as sex slaves, during her campaign. DeMott lost her race bit still made it to the Capitol, where she now works as Rep. Van Beber’s legislative aide.

Colorado Rising Up, the group that organized the event, is a grassroots organization of people who were excited by the World Wide Rally for Freedom global movement, according to spokesman Mark Berger of Boulder. He says the group stands for freedom of speech, freedom of movement, freedom of medical choice, freedom of health, and empowering people with sovereignty.

“We want to we want to have our freedoms that are enshrined in the Constitution — freedom to assemble, freedom to practice religion, freedom to breathe, freedom for health choice,” says Berger. “All of these freedoms have certainly been restricted and are under permanent threat here.”

He acknowledged that Colorado no longer has a statewide mask mandate but noted that county governments, such as Boulder County, still have local restrictions and mandates in place.

Asked if Colorado Rising Up, which features a “Plandemic” sign on the “Suggested Signs” section of its website, believes that the pandemic is either a hoax or intentionally created to control people, Berger said the group has no official position on the issue but welcomes all viewpoints at its events.

He declined to state his own beliefs about the pandemic but wasn’t willing to reject the conspiracy that the virus was purposefully created.

Berger is referencing recent unproven allegations made by U.S. Senator Rand Paul (R-KY) in a committee hearing and fact-checked by Newsweek.

While he wouldn’t share his personal position on any of the pandemic conspiracies, Berger does hold an even more unusual belief, though one that has nothing to do with Colorado Rising Up or the Worldwide Freedom Rally. He claims alien beings live among us and will eventually enslave humanity.

Berger is among several people featured in a video promoting the “Declaration of Human Sovereignty,” which calls upon all aliens to leave Earth and “immediately return in good health all living humans who are now in custody of extraterrestrials.”

Berger also emphasized that Colorado Rising Up is completely nonviolent, a position reinforced by the pre-event video in which the rally emcee asked attendees not to engage with any agitators as well as the group’s decision to not to let FEC United founder Joe Oltmann speak, due to concerns over the reputation of FEC United and its militia, the United American Defense Force for violent confrontation. An armed security guard shot and killed an FEC member after being maced by the guard at its “Patriot Muster” event last October.

According to Berger, Colorado Rising Up discussed the possibility of Oltmann’s group providing security for the event, in which case Oltmann could be a speaker, but the two organizations never came to an agreement.

In a Facebook video posted Saturday morning, Oltmann claimed FEC United and UADF were disinvited because the rally organizers were worried that the groups might incite violence.

Oltmann said that despite being asked not to participate, he was sending some UADF members to protect those who may have missed his new request for people not to attend. A dozen or so UADF members, some carrying collapsible batons and at least one wearing a kevlar vest, attended the rally, which remained peaceful.

Oltmann also disputes the characterization of UADF as a militia and insists he’s never incited violence.

However just two days earlier, while promoting Saturday’s rally on his podcast, Oltmann hinted at violence with Antifa and then praised “those who showed up on Jan. 6.”