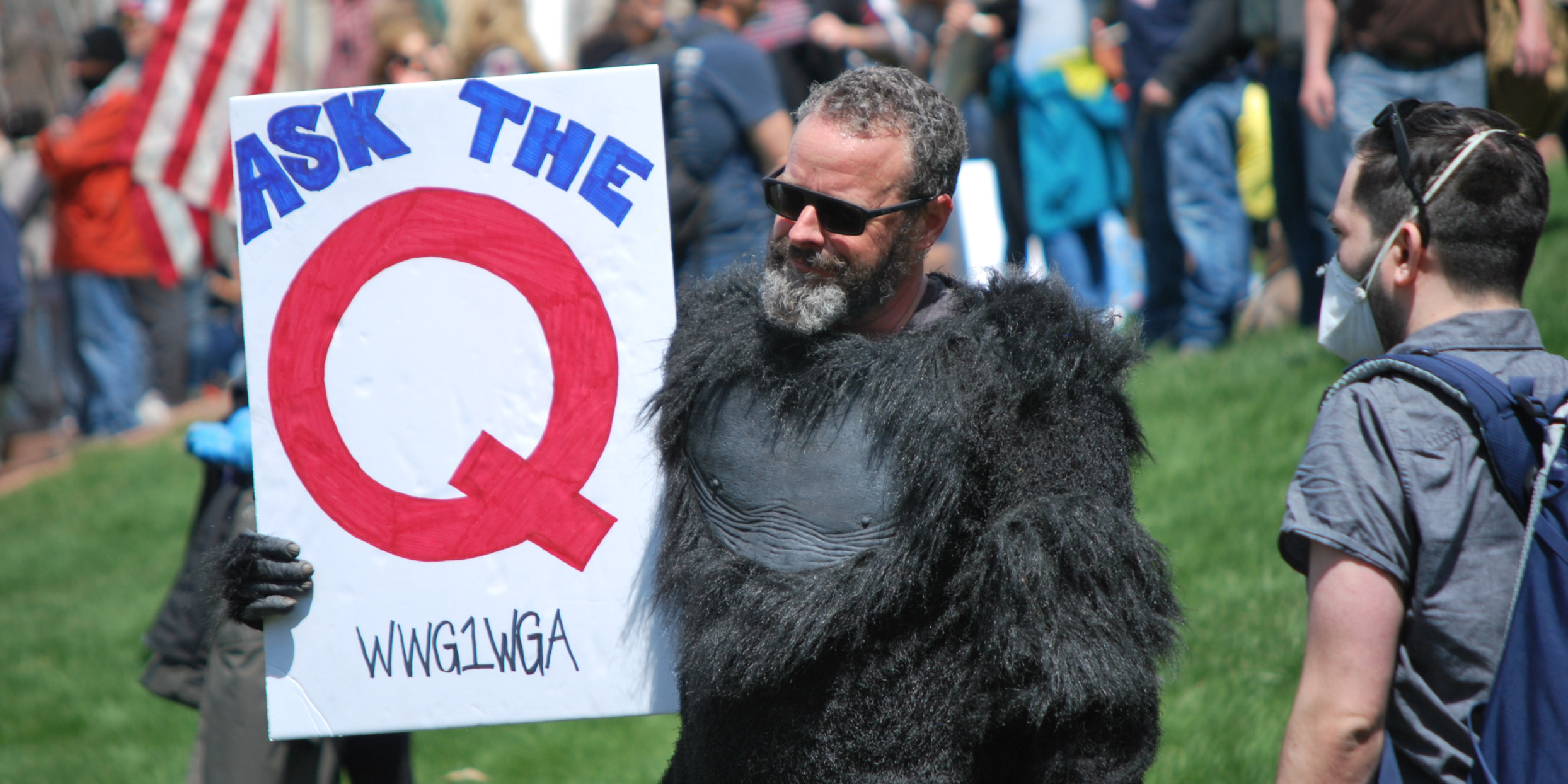 “The idea, in a nutshell, is to create a groundswell of concern by flooding social media with posts about human trafficking, joining parenting Facebook groups and glomming on to hashtag campaigns like #SaveTheChildren, which began as a legitimate fund-raising campaign for the Save the Children charity. Then followers can shift the conversation to baseless theories about who they believe is doing the trafficking: a cabal of nefarious elites that includes Tom Hanks, Oprah Winfrey and Pope Francis.”

However this new campaign isn’t just pushing wild lies about Democrats and the deep state, it’s specifically undermining COVID-19 public health guidelines. Event organizer Delmy Gooch posted an anti-mask meme to the event page claiming, “a child in America is 66,667 times more likely to be sold to human traffickers than die of COVID-19. In addition, your masks assist them in being transported undetected and unidentified to anyone.” This meme spread so rapidly on social media that USA Today issued a fact-check debunking it earlier in the week.

Another march organizer Facebook user “MagdaLynn Sophia,” encouraged attendees to wear masks at the event. However she also posted a conspiracy theory that Bill Gates “tried to kill everyone with a plandemic.”

When called out by a commenter for the absurdity of the accusation, Magda replied with another meme stating that “it’s just as easy to buy a scientist as a politician.”

The Facebook event page says the march will begin at corner of 14th & Bannock Streets in Civic Center Park at noon before stepping off to march around the state Capitol and back down Colfax at 1:00 PM. Attempts to reach march organizers Gooch and “MagdaLynn” via phone and Facebook message were unsuccessful. This article will be updated with any response received.

Denver’s march isn’t the first and won’t be the last of these in-person rallies. In a piece titled, “How ‘Save The Children’ Became A Conspiracy Grift,”Mel Magazine covered reported on a July 31 event at CNN’s Los Angeles bureau office:

“Despite it being the U.N.’s World Human Trafficking Awareness Day, there were decidedly stranger signs and ideologies being shared, too. Countless signs at the CNN rally and the ensuing march referenced #Pizzagate, the widely debunked conspiracy theory that claims to pin Hillary Clinton and longtime ally John Podesta to a child sex ring. Others featured some take on the phrase “Child trafficking is the REAL pandemic,” seemingly downplaying the importance of COVID.”

Colorado Republican Congressional candidate Lauren Boebert has already made national news for her statements in support of QAnon conspiracy theories. She told an online podcast,

“Everything that I’ve heard of Q, I hope that this is real because it only means that America is getting stronger and better, and people are returning to conservative values.”

Despite attempts by her campaign staff to defuse those comments by saying she is not a “QAnon follower,” Boebert remains one of the most visible Republican candidates associated with QAnon. Here in Colorado however, she’s not the only one. GOP statehouse candidates are also pushing this anti-shutdown message that the “real” problem is in fact child sex trafficking.

Via her campaign page, Koch posted fake images of supposed increase in human trafficking arrests under President Trump as compared to the Obama administration, as well as numerous QAnon-linked conspiracy theories.

She also shared a very recent (and also debunked) conspiracy theory that the online furniture company Wayfair is selling children as sex slaves.

Koch has shared previous conspiracy theories, such as the debunked claim that “antifa and professional anarchists” placed pallets of bricks in cities for protesters to throw during marches. The Koch campaign did not immediately respond to a Facebook message requesting comment.

On July 31 she shared a post listing dozens of headlines, supposedly of trafficking crimes from the past month. Not only were some actually from as far back as 2007, the list also included the fake “Wayfair Furniture” conspiracy.

Reached for comment, DeMott said she was unaware of the upcoming march, but that child sex trafficking is “very much happening.” She continued, “It’s an important issue that we need to do everything we can to make people aware.” She emphasized that she cares very deeply about preventing it, both personally and as an aspiring member of the Colorado legislature.

Asked specifically about the Wayfair Furniture conspiracy, Demott said the post she shared was from her personal page and that her only intent was to spread awareness of the issue of child sex trafficking. She said she does not share conspiracy theories, but that any of the specifics of the post “were worth a conversation.”