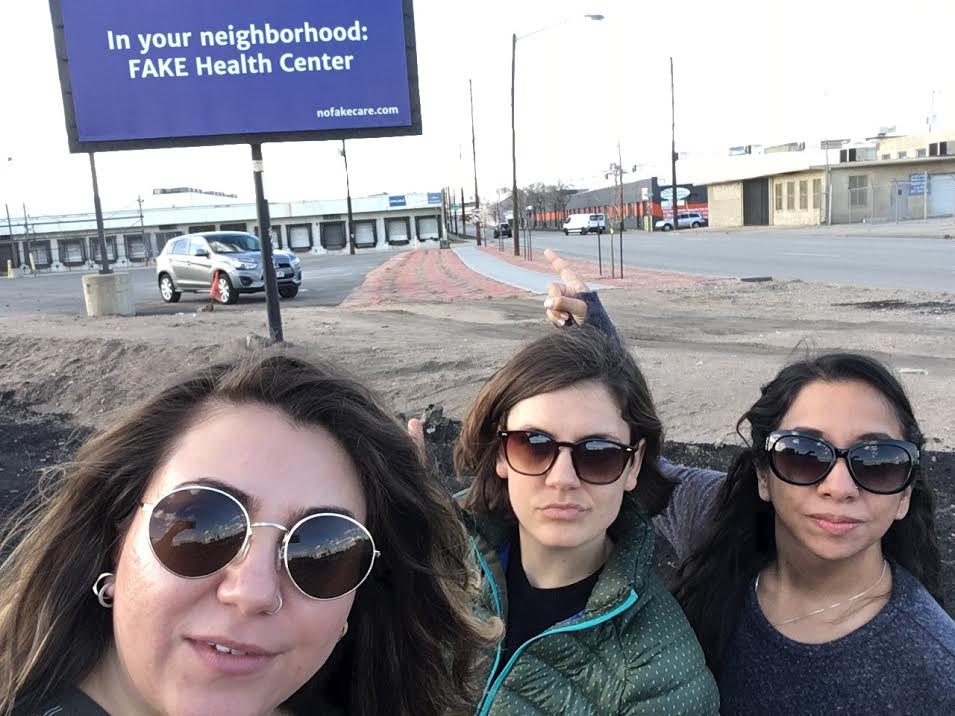 Billboards across Denver are alerting pregnant women of “fake health centers” in their neighborhoods.

The initiative from the Colorado Organization on Latina Opportunity and Reproductive Rights (COLOR) takes aim at anti-abortion pregnancy centers that attempt to convince women not to terminate their pregnancies, often by using misinformation and masquerading as legitimate abortion clinics.

As COLOR points out on nofakecare.com, its website for the campaign, many of these fake clinics advertise in low-income neighborhoods and communities of color:

“For women who are poor, do not have transportation or paid leave from work and people who need to arrange for childcare, making a trip to a provider is already difficult. Making another trip after they have been lied to by the CPC may delay their access to care or push care completely out of reach.

“These centers specifically try to advertise in places where people may not have access to a comprehensive clinic. They do Spanish language billboards in neighborhoods with a large number of immigrants and focus on areas where people may not have insurance and are trying to figure out how to get care. They present themselves as being a way to meet people’s needs. It is cruel, callous and unconscionable.”

The pregnancy centers, which are often referred to as Crisis Pregnancy Centers (CPCs), typically offer ultrasounds, pregnancy testing, and counseling, but not abortions, and instead try to persuade women who are seeking abortion services not to carry through with the procedure.

This often includes pushing false information about abortion, like making the procedure sound medically risky when, in fact, it has been proven to be very safe.

In fact, a federal investigation that surveyed 23 anti-abortion pregnancy centers found that 20 of them provided false or misleading information about abortion, like scientifically unproven links between breast cancer and the procedure and emotional side effects. CPCs now vastly outnumber abortion clinics, with more than 4,000 nationwide.

Billboards advertising for pregnancy centers sometimes tell women to call them if they are “pregnant and scared,” which COLOR says amounts to “targeting people who are in a tough place and preying on them.”

In addition to billboard advertising, anti-abortion pregnancy centers have maintained an online presence by advertising on Google. Google vowed to remove the misleading ads from its platform, but the pro-choice blog Rewire.News found last December that some ads remained.

The progressive advocacy organization ProgressNow Colorado has launched an online petition asking Google to fix the problem and give women who are searching for abortion clinics accurate information.

Questions about what information pregnancy centers should be required to provide to women who walk through their doors have risen to the U.S. Supreme Court, which heard arguments last month about a California law meant to regulate those centers.

The law requires CPCs to clearly inform women if they aren’t licensed to perform medical care and provide information about low-cost family planning services in the state. The National Institute of Family and Life Advocates (NIFLA) argued the law violates the First Amendment.

The popular late-night comedian John Oliver featured a segment on CPCs in a recent episode of Last Week Tonight, and even opened his own pregnancy center to demonstrate the lack of regulations governing them and their ability to provide women with potentially life-threatening misinformation. “This is all perfectly legal and there is absolutely nothing stopping us from parking outside an abortion clinic tonight and haranguing people first thing in the morning,” said Oliver. “And frankly, there really f**king should be.”

“It’s no shock that the very ones who support tearing the arms and legs off small people or poisoning them to death would also lie about what a CPC is/does,” Colorado Right to Life’s Susan Sutherland said via email.

“Let’s be clear. The biggest fake news out there is that murder by abortion is healthcare. Funny how almost every lie concerning a CPC that is stated on their pathetic [nofakecare.com] site is in reality, precisely describing an abortuary, aka, Planned Parenthood, Women’s Clinic etc. Their wicked and evil intent has no limits. They are baby murderers, God-haters and need to repent and turn to Christ.”

Asked to clarify what she meant by “lies” on the campaign’s website, Sutherland disputed the claim that CPCs shame and coerce women away from seeking abortion, writing that “there is no shaming or coercion, unless their definition of such is Loving your neighbor as yourself and Offering true hope and help to those who may seek to murder their own sons and daughters.”

She added that there’s “NO shame in attempting to rid the culture of a holocaust.”

In response to another statement on the website, Sutherland stated that CPCs “never” claim to be comprehensive health-care clinics and are proud to target pregnant women who are scared. “’Targeting’? Of course CPCs are reaching out to this audience,” she wrote. “Those are the people who need the help of a CPC.”

It’s worth mentioning that in addition to targeting low-income women who are experiencing unplanned pregnancies, anti-abortion pregnancy centers are known to target women who are actually seeking an abortion provider and aren’t aware of what services CPCs provide.

As Oliver pointed out in his Last Week Tonight segment, leading anti-abortion activist Abby Johnson said at an annual Heartbeat International conference in 2012, “We want to appear neutral on the outside. The best call, the best client you ever get is one that thinks they’re walking into an abortion clinic.”