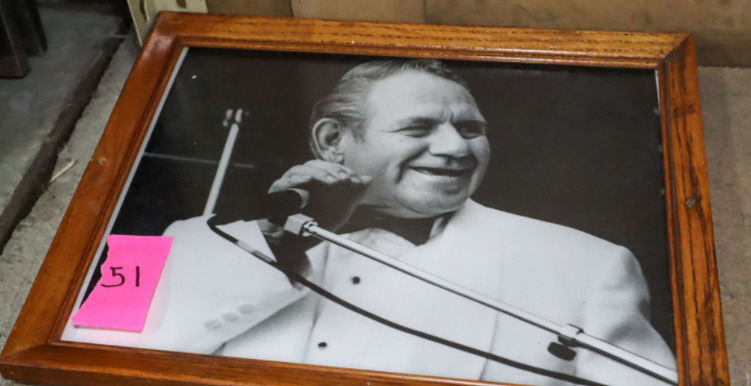 The days of listening to jazz and ordering a beer and a hot burrito at El Chapultepec are over, but it’s not too late to buy the plate, the pint glass, and the booth where you used to sit.

And remember the portraits of jazz musicians and legendary Chapultepec owner Jerry Krantz? You now have the chance to gaze at those for as long as you live.

The photographs, along with other bar decorations and kitchenware from Chapultepec, an iconic Denver jazz music joint that closed last month, are being auctioned off online now at Roller Auctions.

Anna Diaz, who owned El Chapultepec with her sister, Angela Guerrero, after Krantz died in 2012, says the family doesn’t face a dire financial situation; the auction is a way to “share pieces of the Pec with the community” as well as a way to avoid keeping the restaurant equipment in storage.

“We’ve had some funny calls from people who want to buy stuff, like the urinals in the bathrooms,” laughed Diaz, but alas they are not for sale. Also not included in the auction are items the family donated to History Colorado and the Colorado Music Hall of Fame.

The antique cash register that sat in front of the bar appears on page one of six pages of action items.

“My dad had the cash register there until there was nobody left who knew how to repair it,” said Diaz. “He wasn’t a musician, but he loved jazz music and the environment of it all. And so as a joke, when people asked what instrument he played, he said, ‘the cash registers.’ And he’d hit the ‘No Sale’ button and it would make a noise, ‘Ka-Ching.'”

“We had a lot of fun going through all the pictures and remembering all the people who came and played,” said Diaz when asked about her favorite items on the auction block.

One of the photos (auction lot 454) features Eddie Harris, a KUVO DJ, Art Blakey, and Krantz.

“That was taken on one of those nights when it was just a good time,” said Diaz. “There had been a wedding of another musician, and we had the after-party. It was music all night long.”

Diaz also points to a photo taken at a roast of her dad (lot 465)–a memorable moment for the family. Photos of bass players in lot 461B were given to Krantz by photographer Thomas Burn.

The photos were gifts from photographers or were sent as part of promotional materials and framed by Krantz, who bought the Mexican restaurant and added jazz music in 1968.

“People who wanted a gig would often send a press kit with a photo and a press clip,” said Diaz. “Now they just send a link, right.”

There are Denver-themed Monopoly games (lot 447) that Krantz used to sell with local Denver businesses pictured on the board instead of the usual Monopoly features. Most are closed now, said Diaz.

The upright piano for sale at the auction is the replacement for a larger piano that was played so much at Chapultepec that it needed to be tuned all the time and had to be replaced a few years ago.

“The piano is a little banged up because a lot people would put their own keyboard on top of it,” said Diaz.

The auction, conducted online, is open now. Bidding on some of the items is scheduled to be stopped at 2 p.m. Monday, but no item will be closed until three minutes elapses without a bid, said Diaz. Other items will roll to a close over in the coming days.

The decision to close the bar was influenced by the pandemic, but Diaz has said that redevelopment of lower downtown, including the construction of Coors Field, created a neighborhood that didn’t fit the pace and style of El Chapultepec.