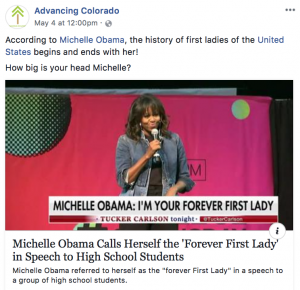 Advancing Colorado’s May 4 Facebook post, which referenced a comment former First Lady Michelle Obama made in a graduation speech, generated numerous comments, many of which were blatantly racist, sexist or transphobic. The post noted that Obama acknowledged a nickname actor Nick Cannon gave her, calling her his “Forever First Lady.”

Advancing Colorado, a right-wing online activist group, shared it with the tagline, “How big is your head, Michelle?”

The post was shared by State Rep. Judy Reyher (R-Swink), who is already known for sharing racist memes on Facebook. Other commenters stated that Obama is not really a woman, or used images of monkeys.

Advancing Colorado hasn’t removed any of these overtly sexist, racist and transphobic comments. Rather, it added its own comment encouraging the people who made them to join the group:

“Advancing Colorado Learn how to fight back against arrogant politicians like this one! >>”

Executive Director Brandon Wark is scheduled to be the featured speaker at next week’s legislative wrap-up meeting of Denver Liberty On The Rocks.

As indicated by the website Advancing Colorado directs potential list members to, the group is run by Rearden Strategic, Joe Neville’s consulting firm. Joe’s brother is House Majority Leader Patrick Neville and Joe’s father is State Senator Tim Neville. Both elected officials, along with several other conservative members of the Colorado House and Senate, including Reyher, share Advancing Colorado’s Facebook posts. Advancing Colorado did not respond to a Facebook message requesting comment.

Rearden Strategic also runs the independent expenditure committee charged with supporting Republican House candidates, Values First Colorado. Given the values on display by those commenters Rearden’s staff is attempting to recruit for Advancing Colorado, it’s unclear if the name is ironic.