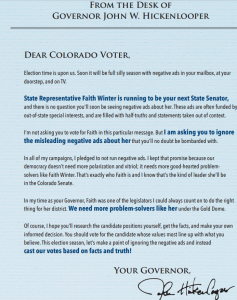 A letter penned by Colorado Gov. John Hickenlooper was sent to Adams County voters last week, asking them to “ignore the misleading and negative ads” about Democrat Faith Winter, who’s running for a state senate seat.

The ads fail to mention that Hickenlooper endorsed Winter, not Humenik, in the Adams County race.

And a pro-Humenik television ad airing now also omits Hickenlooper’s endorsement of Winter. It shows multiple images of Humenik and Hickenlooper together.

And these ads don’t inform voters that Humenik is a Republican. 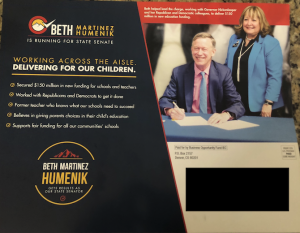 In Hickenlooper’s letter, sent by a progressive political group, the governor wrote:

Hickenlooper: State Representative Faith Winter is running to be your next State Senator, and there is no question you’ll soon be seeing negative ads about her. These ads are often funded by out-of-state special interests, and are filled with half-truths and statements taken out of context…I am asking you to ignore the misleading negative ads about her that you’ll no doubt be bombarded with.

Neville was pictured with Hickenlooper in an advertisement creating the impression that the governor endorsed Neville, even though Neville is one of the most conservative lawmakers at the Capitol.

The photos in the ads are real but the ads are misleading, as Hickenlooper and fact checkers have said.

The Humenik and Neville ads were paid for by the Business Opportunity Fund, a conservative group that’s largely funded by Republican donors like Larry Mizel of MDC Holdings and Blair Richardson of Bow River Capital Partners. As of Monday, campaign finance records show that the organization has spent about a half million dollars but has reported donations of $25,000, meaning the source of the vast majority of its donations are still unknown.

A call seeking to know why the Business Opportunity Fund isn’t mentioning that Democrat Hickenlooper endorsed Winter–and that Humenik is in fact a Republican–was not returned by its registered agent, Katie Kennedy.

But the ads were likely created, political analysts say, to distance the Republican candidates from their own party, and to create the impression of bipartisanship, in a year when suburban hostility toward the Republican Party is running high.

Republicans hold a one seat majority in Colorado’s senate, and the Humenik-Winter and Neville-Story contests are among a handful of races whose outcome will likely determine which party controls the state senate chamber.