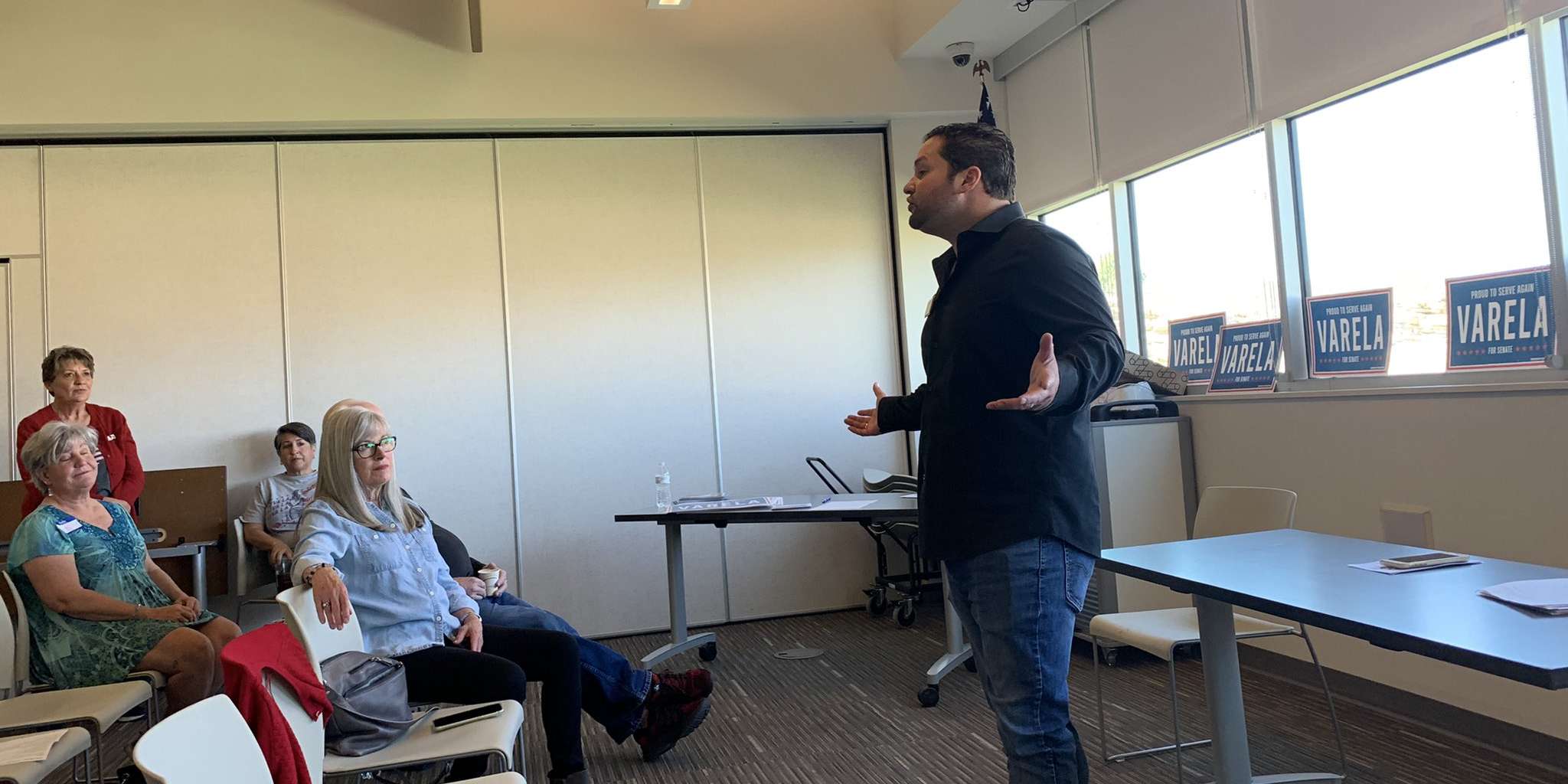 The race to represent the Pueblo area in the Colorado Senate is one to watch this year, in part because the outcome could potentially affect the Democrat’s five-seat majority in the Senate.

Incumbent Sen. Leroy Garcia resigned in February to work for President Joe Biden’s administration, which led to Sen. Nick Hinrichsen (D-Pueblo), who planned to run after Garcia’s term was up, being appointed to the newly vacant Senate District 3 seat.

Hinrichsen is facing former Democrat Stephen Varela, who hopes to be the face of a reinvigorated Republican Party in the Southern Colorado Democratic stronghold.

“I became fascinated in politics when I got an internship with my congressman in high school,” explained Hinrichsen, an Army veteran who was serving as Pueblo Transit’s operations supervisor when he was appointed. “I got my bachelor’s in political science and have always been very much a volunteer. I supported my wife when she was in office for two years, but never actually jumped into anything myself, until November. Sen. Garcia was term-limited, so I announced in November that I was going to seek to replace him at the end of his term, and then woke up one day in February to the surprise that the campaign I had planned to be a 10-month campaign had 10 days. It was quite a switch.”

Since his appointment, Hinrichsen has stayed busy at the Capitol representing his constituents in Pueblo County. “I’m a sponsor on over 20 bills now,” he said. “Ten of them I introduced myself. There’s some broad coverage, but my emphasis is on crime, cost of living and economic opportunity. That’s what it all comes down to for priorities. I have a couple bills that deal with trying to address youth delinquency and early interventions, so that we have opportunities for healthy development and life choices prior to getting involved in the juvenile justice system. [I have] a bill that helps communities address crime in the built environment, referred to as a ‘Safe Streets’ bill, a bill that funds local law enforcement efforts to prevent identity-based violence like the attack on the Temple Emanuel Synagogue in Pueblo a couple years back. I’m running the bill on the tax refund checks. On the cost of living side, I ran a bill that is really targeted for affordability of mobile homes, [and] a bill to eliminate license fees for nurses. I sponsored a bill that suspends the gas tax.”

Varela, a former Democrat and self-described combat veteran, hopes to turn the longtime Democratic stronghold red. During the 2018 election, incumbent Democrat Garcia beat his Libertarian opponent, John Pickerill, with 73% of the vote. Garcia did not have a Republican opponent.

Varela says Republicans are getting organized in Pueblo. “We are actually a very cohesive group here,” he said during an April 30 event at the Greenhorn Valley Library in Colorado City. “There’s growing pains, because we’re kind of a new party in Pueblo, new leadership, growing new folks, but at the same time we have people that have always been involved.”

Like Kolten Montgomery, the ex-Republican running for Fountain’s House District 21, Varela says his former party no longer represents him. “I was a Democrat for a long time, and at some point my wife and I realized that the party has really changed,” he said. “Our conservative values weren’t being represented anymore, so we made the decision as a family to move forward and become Republicans. When I started getting involved with the party I realized, ‘If not me, then who?’ I took the step this last year and I said, ‘I’m going to take a leap,” so we got involved.”

Varela serves on the board of Chavez-Huerta Preparatory Academy, and despite some recent controversy over political events at the school, is the board’s president-elect. Varela also touts his experience on Pueblo County’s Planning Commission, and his time as a former union president. Varela compares himself to Ben Nighthorse Campbell, a former U.S. Representative from Colorado who also switched parties.

“With me being a former Democrat, there hasn’t been a big issue on that,” said Varela, who is running during an election cycle characterized by extreme polarization in conservative circles. “One of the things that has been very welcoming from a lot of people is seeing me come over that crossover, and having someone that is very middle-grounded and understands both sides of the fence and is willing to work with everybody to come to a common decision. That’s what we’re missing. We haven’t seen that in politics since the 90s. That’s something I think I bring and that’s a breath of fresh air for a lot of people.”

Varela says his campaign will focus primarily on the economy. “I look at myself as a fiscal conservative, but I’m socially awesome when it comes to social issues,” he said. “We don’t care what people are doing in their basements or garages, as long as they’re not breaking the law. What’s important is that our economy is moving forward in a strong way. When I look at myself as a candidate, I’m an economic-focused candidate. I want to look at removing barriers to diversify our economy in Pueblo. Right now we’re a company town. I want to focus on ways we can bring other industry into Pueblo. Education is huge, a lot of our educational systems here are scoring at the lowest. There’s got to be ways we can have innovation. At the same time, affordable housing [is an issue of concern]. Pueblo’s housing market is boosted. A house that was $46,000 at one point is now $220,000. We need to make sure that we’re growing smart, we’re growing in a way that a single mom, a single dad or a young couple can still buy a house or afford rent while only working one job, not working three to four jobs.”

Like fellow Republican Heidi Ganahl, who is running for Governor, Varela also supports changes to public education funding, which critics argue is a conservative plan to divert funds from public schools to private and religious institutions. “If we could look at ways we could fund the student, and have the funding follow the student, it will allow innovation for the teacher as well,” he said.

When it comes to the prevailing “social issue” of the day — the right to access an abortion, which was enshrined in Colorado law with the Reproductive Health Equity Act (RHEA) — Varela is less concrete in his position. “I think we have to look at it from a perspective of health, and looking at the female’s perspective of health and what is best for the mom and the baby,” he said. “I don’t think one way or the other right now is right or wrong. I just think we have to really focus and understand what we’re doing and if it is the right thing.”

Like Varela, Hinrichsen’s long-term legislative goals are also focused on the economy. “What I want to focus on for the long term is two things, really,” he said. “One is economic development. I think we have some real opportunities with the Front Range continuing to grow south. I think we’re about to tap into the Front Range growth if we make some strategic investments in our infrastructure. I’d like to see developments to turn the rail yard into a multimodal capable yard. I’d like to see expanded development around the airport, which I think would be excellent for distributors and manufacturers, and how we invest in those infrastructure and transportation projects is important. I think, going forward, how we manage our water infrastructure is going to be super critical to the state, so those are areas where I’m going to be focused for the long haul.”