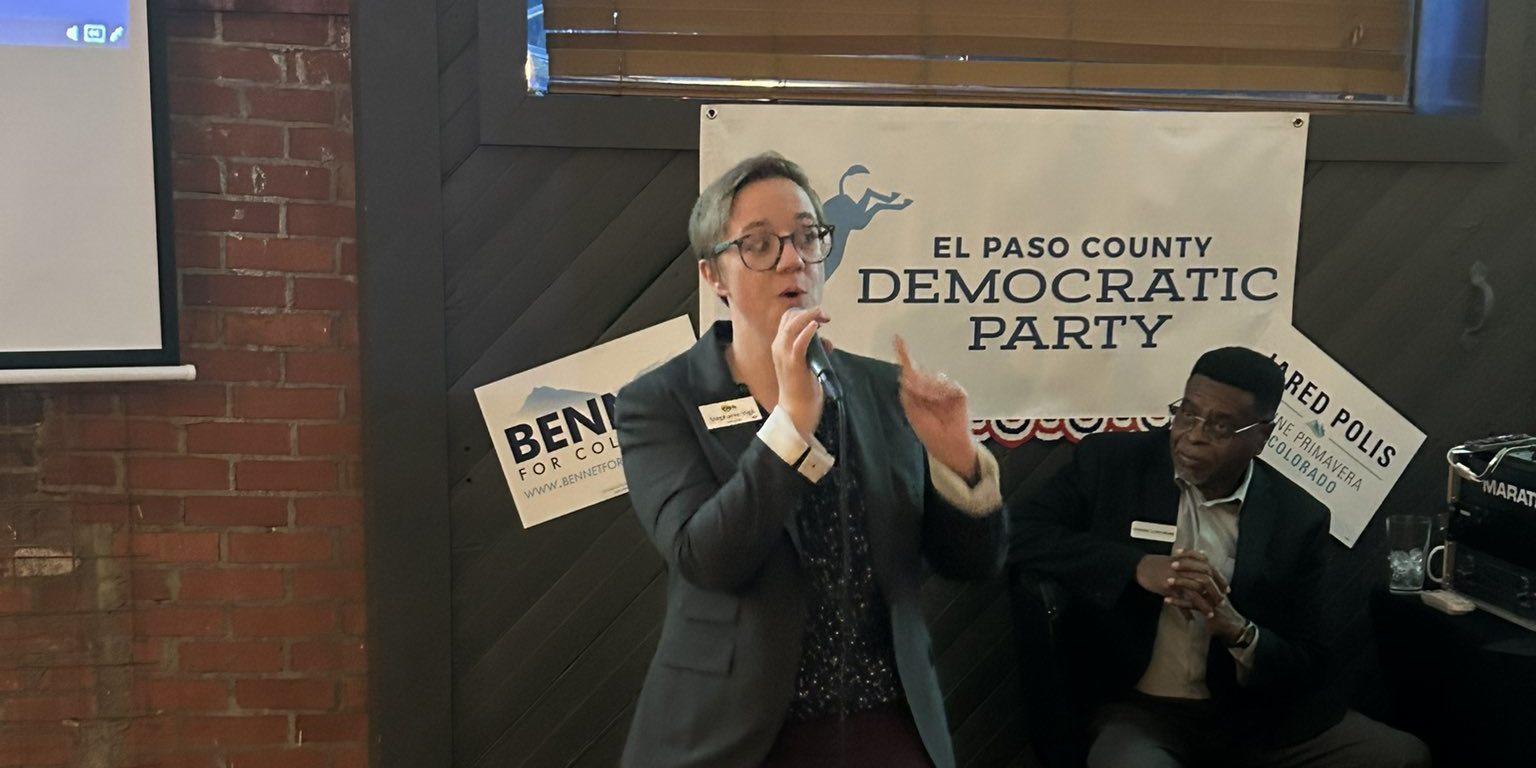 Democrats in Colorado won big last night, winning all the statewide races, potentially taking six of the eight U.S. House of Representative seats and winning the U.S. Senate race. Nowhere in Colorado is the Democratic victory more evident than in El Paso County, where, based on early unofficial results, Democrat Stephanie Vigil is poised to flip a house seat in a race against Colorado Springs City Councilor Dave Donelson, where Vigil leads by 737 votes.

“We feel great about tonight’s election results,” said El Paso County Democratic Party Chair John Mikos during the watch party in Colorado Springs. “A number of races are still too close to call, but we have made great gains throughout the county in terms of Democratic share of the vote. In those key target races that we were looking at, three House races and one state Senate race — again, too early to call — but it certainly is looking very promising.”

In El Paso County, Republicans have been waging a civil war within their own party, fought between the “grassroots” faction led by Republican Chair Vickie Tonkins, who instructed voters to “vote your conscience” during this election instead of voting for Republicans, and the “establishment” faction of incumbents. Members of the Tonkins faction took to Telegram during the election to urge Republican voters not to vote for candidates they considered “RINOs” or “Republicans in name only.” Failed El Paso County Sheriff candidate Todd Watkins encouraged voters to choose Libertarian Brian Peotter over Republican Joe O’Dea, who lost to incumbent Sen. Michael Bennet (D-CO) with just 42% of the vote, compared to Bennet’s 54%.

Amid the Republican infighting, El Paso County Democrats stuck to a strategy of fielding as many candidates as possible and canvassing extensively. “Credit really goes to the candidates,” said Mikos. “Those that are the path to win tonight and those who did not win tonight did great work. We’ve had a strategy for the last three election cycles to field as many candidates as we can across the ballot. We do that for a number of reasons. One, it helps to make the Democratic Party presence known throughout the county, and when voters see Democrats on the ballot in all races or nearly all races, it begins to point out that they have a chance to elevate issues. We’re able to raise issues that we otherwise couldn’t. Thirdly, it really helps to lift the entire ticket, to include the state races. El Paso County is the largest county in the state, and what El Paso County Democrats do, well, it helps the entire state. So we feel like we did our job locally. We feel like we’ve done our job to support the state.”

Vigil, who campaigned on her experiences as a gig worker and on issues around affordable housing, public transportation, and support for abortion and the LGBTQ community, thanked her campaign staff during remarks at the end of last night’s watch party. “We knew it was going to be a squeaker,” she said. “We knew it’s really competitive. We out-worked, out-fundraised, out-walked, out-pulled everything compared to my Republican opponent, every step of the way in this race.”

Republicans also lead county-wide races in El Paso County, although the race for District 5 El Paso County Commissioner, between Republican incumbent Cami Bremer and Democrat John Jarrell was closer than Democrats have come to a county commissioner seat in 50 years.

“[Jarrell] has been just a fantastic candidate,” said Mikos. “He’s been a fantastic party leader. He has been the force behind growing our party in this county, and he is going to be continuing to watch as we go into county commission redistricting, which will be something that we’ll be watching very closely in the next election. There are three county commission seats that come up [for election], and I can promise you the El Paso County Democratic Party will be fielding strong candidates. We have great expectations for the 2024 elections.”