Candidate for Governor Admits to Forgetting to Disclose His Wife’s $30K Income, As Required by Colorado Law 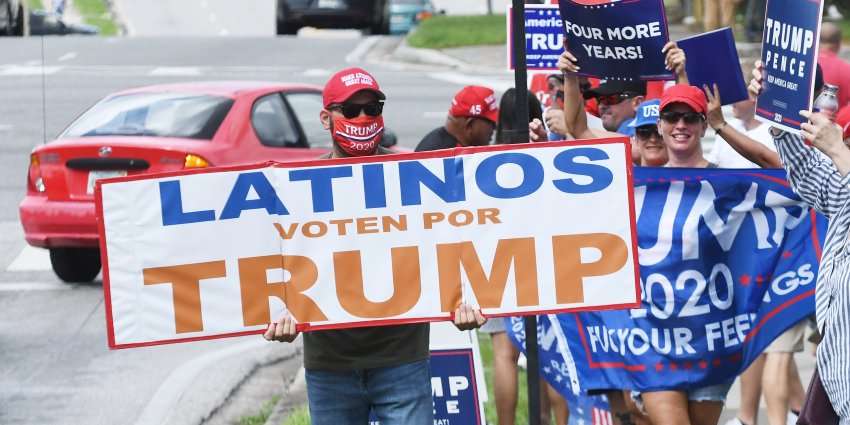 Colorado’s Republican Party is looking for new ways to attract voters after Colorado shifted further left in the 2020 elections.

State party leaders are targeting Latino voters, hoping that Donald Trump victories in Florida and Texas are signs that Latinos could swing to the right. They argue that convincing even a small percentage of Latino voters, who are a significant part of the Democratic base, to vote GOP could be part of a path back to power for Colorado Republicans.

However, Republicans don’t appear to be making headway, in part, because their outreach is largely based on misconceptions about Latinos, a stumbling block that plagues both parties, according to advocates.

“It’s really important for both parties to not pigeonhole our community,” says Dusti Gurule who directs the Colorado Organization for Latina Opportunity and Reproductive Rights (COLOR). “We’re not a monolith.”

Colorado Hispanic Republicans (CHR) Chairman Hugo Chavez-Rey explained that reaching out to minority voters should be one of the main goals of the state party moving forward.

“The party as a whole has only paid lip service to Hispanic and Black voters.  And that has to stop,” Chavez-Rey said. “We do welcome people, but the perception is that Republicans are not welcoming to minorities and you know what they say, perception is reality. But our messaging has to reflect that we are welcoming to all.”

The LIBRE Initiative is a Koch brothers-funded organization dedicated to informing the Hispanic community about conservative values, even though it claims to be non-partisan. LIBRE has a Colorado office and has spent just under $15,000 since April 2020 on Facebook ads in the state. The ads focused on defending TABOR, advocating for 2020 Ballot Propositions 116 and 117, and fighting a proposed gas fee in Colorado.

The LIBRE Initiative of Colorado declined to answer questions about their work in Colorado, including whether they’re finding skepticism among Colorado Latinos about the group’s narrow focus on tax issues.

Chavez-Rey thinks that these results can be changed if the Colorado GOP focuses on reaching out to Latino voters about “Republican values.”

“There’s no question that Hispanic values align completely with Republican values,” Chavez-Rey said. “Hispanic families are conservative by nature, they’re faith-based, they’re family-oriented, they’re pro-education, anti-abortion. And yet a majority of them still vote for Democrats. What I like to say is that a lot of Hispanics are voting against their own values.”

Nonetheless, Hispanics and Latinos do not all share a single set of values.

Dusti Gurule, who directs the Colorado Organization for Latina Opportunity and Reproductive Rights (COLOR), explained that while some of the Latino community are faith-based, they are also marginalized in different ways. Often the systems that oppress these communities are supported by conservative lawmakers, she says.

For example, climate change and COVID-19 are both issues that disproportionally affect those in the Latino community, but Republicans often side with harmful climate change policies or try to limit the scope of COVID-19 relief bills, both in Colorado and nationwide.

“No one lives a single-issue life,” Gurule said. “You can’t separate the positions that elected officials take on paid family leave or raising the minimum wage. …It’s frustrating but not surprising that the GOP is grasping at straws when it comes to our community.”

Nationwide, politicians and pundits argue that the Republican Party’s stance against abortion will win over Catholic Latinos.

But in 2020, Colorado anti-choice advocates faced a wake-up call when a surprising number of Trump supporters voted to reject an anti-choice ballot proposition.

“Even Latinos with really strong faith values believe in a person’s right to their own self-determination,” Gurule said. “For those folks of faith who have social justice values, it’s the same thing.”

Colorado Republicans may have been inspired by Trump’s improvement among Latinos nationwide in November’s election, but it’s widely acknowledged that the “Latino vote” is a lazy generalization that ignores the diversity of Latino communities. Factors that may have led Latinos in Florida to vote Republican in Florida, for example, may not apply in Colorado.

Furthermore, Trump’s success with Latino voters might have more to do with targeted disinformation efforts on Facebook and WhatsApp clients than anything in particular about his message. An October 2020 LA Times article outlined this disinformation, which mostly consisted of labeling Biden a socialist, decrying the legitimacy of mail-in voting, and framing Black Lives Matter protests as exclusively violent.

Similarly, Democrats have to be wary of how they treat Latino voters. Mainstream media outlets conveyed perplexity about significant Trump victories among Latino populations in both Texas and Florida. The Wall Street Journal, NBC News, and Vox published articles warning Democrats not to take Latino voters for granted.

On Friday, The New York Times published an article about why Latino men turned to Trump in 2020, even though exit polls showed Latino men still overwhelmingly voted for Biden and that Trump’s base is still predominantly white.

“For decades, Democratic candidates worked with the assumption that if Latinos voted in higher numbers, the party was more likely to win,” the article read. “But interviews with dozens of Hispanic men from across the country who voted Republican last year showed deep frustration with such presumptions.”

“We work very hard to hold all elected officials accountable, to make sure they don’t take our communities for granted, and that actions speak louder than words,” Gurule said.

For example, during his 2020 senate campaign, Hickenlooper branded himself as a champion for immigrant rights. The Colorado Immigrant Rights Coalition Action Fund campaigned for Hickenlooper during his senate race. And when Hickenlooper voted with Republicans to prevent undocumented immigrants from receiving stimulus checks, Colorado immigration advocates called Hickenlooper out.

“The senator’s vote to deny critical relief to people who need it most was a slap in the face to every essential worker, every immigrant, and every Coloradan,” ACLU of Colorado Public Policy Director Denise Maes said. “It is not enough for him to praise people as essential while campaigning. The senator must actually prove it through his actions as an elected.”

Gurule hopes that elected officials are more intentional in how they treat voters that elect them, especially when it comes to the Latino community.

“If you really care about communities, then care about their very basic needs,” Gurule said. “It’s not rocket science. Just talking about it I get a little irritated. I feel like our community gets taken for granted. Both parties need to be better.”

A review of the 2020 presidential election by UCLA’s Latino Policy and Politics Initiative found that Latino voters across the country were decisive in winning the election for Biden. The report also showed that while there was a media spotlight on the Cuban-American voters who swung to Trump in Florida, the state’s Puerto Rican-American community voted for Biden.

In Arizona, Mexican-Americans made up most of the state’s Latino electorate and were a key reason Biden won the swing state.

This indicates how diverse the “Latino vote” really is. In Colorado, this can be seen in how Latinos prefer to be identified.

According to a study by the Latino Leadership Institute at the University of Denver, 59% of Colorado Latinos prefer to identify as Hispanic, 25% prefer Latino, and 16% have no preference between the two. In this article, the Colorado Times Recorder followed AP Style guidelines, which recommends using more specific terms — Cuban-American or Mexican-American — when possible.

Chavez-Rey hopes that the Colorado Republican Party learns to target Hispanic and Latino communities in future elections. He also hopes that the party can come together and present a unified message.

“What I will say is that there is plenty of room for discussion on how to grow the party in Colorado,” Chavez-Rey said. “We need to have a strong unified message. It can’t be a fractured message. Because that doesn’t create unity among voters. … We have to get everyone on the same page and pushing in the same direction.”

When asked what the Colorado Republican needed to do differently in future elections to avoid another 2020, Chavez-Rey bristled at the idea that the Republicans were to blame.

“That’s a question that presupposes that the Republican party did go wrong in the elections,” Chavez-Rey said. “That’s discounting the fact that there is tremendous evidence out there for election fraud.”

In fact, Chavez-Rey said the main focus of CHR was now to ensure free and fair elections, despite the overwhelming evidence that the 2020 elections were secure.

Chavez-Rey also charged that the Colorado elections — viewed as one of the most secure elections in the U.S — should be subject to an investigation because Colorado used Dominion voting machines.

“I don’t think on a level playing field the president would have lost,” Chavez-Rey said. “On a national level Republicans were expected to lose more House seats, but really Republicans gained 16 house seats. … To me, that’s a victory. That shows me that voters were tuned in. The Senate I believe was flat out stolen there’s no doubt in my mind both in Georgia and in some other places.”