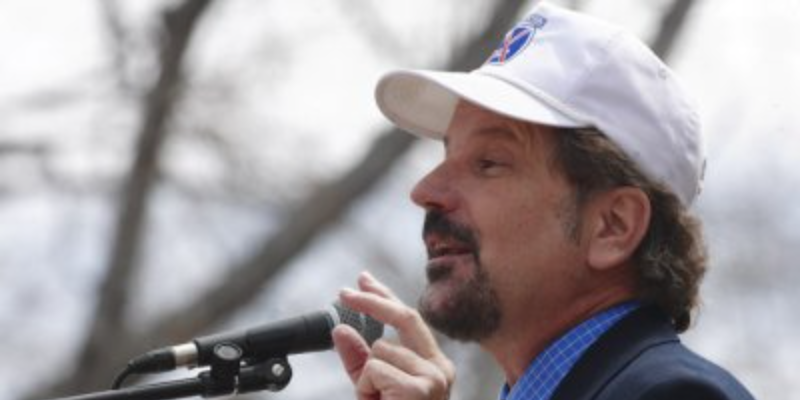 Last Wednesday, in the aftermath of the Club Q shooting in Colorado Springs, KVOR radio host Richard Randall complained about the media coverage of the tragedy, saying that news outlets don’t cover crimes committed by immigrants as extensively.

“They pay me to be honest here,” Randall said during his show, which is based in Colorado Springs (Listen here at 2 min 30 seconds.) “And it is a source of annoyance to me that if certain people are mowed down by cars or are killed by somebody who’s here illegally, then their life just doesn’t seem — if you base their life, not on what their loved ones or the friends, neighbors and folks like that think about their life or what God thinks about their life, but what the media thinks about their life, there’s a world of difference between who the victims are and I’m not going to belabor the point.”

Spotlighting crimes committed by immigrants in a common tactics employed by conservatives who wish to paint immigrants — often Latin Americans — as violent.

This narrative is steeped in racist and xenophobic roots and frequently uses examples taken out of context as evidence behind their claims.

In fact, documented and undocumented immigrants are less likely than native-born Americans to commit crimes.

While Randall did not respond to a request for clarification regarding his statements on the Club Q shooting, later last week on his Nov. 26 show Randall emphasized that he does have sympathy for the victims and their families, but he has issues with how the media is covering the shooting. This story will be updated with a comment from Randall if one is provided.

“My empathy, my sympathy, my heart goes out to everyone impacted by the shooting,” Randall said. “And not just everyone impacted by the shooting or was injured or had a loved one that was killed, but everybody who was there. You know, they’re going to suffer PTSD in one fashion or another. There are absolutely great stories of heroism that comes out of that and all I want is the truth. Okay? The truth. But somewhere between the truth. We have to deal with perception. … There’s also a narrative and I don’t know that I’ve ever seen a narrative pushed quite the way the media pushes the narrative now, and it does it in conjunction with activists.”

However, a few seconds later Randall downplayed the shooting, where five people were killed and 18 were injured, by saying that in some countries identifying as queer can be punishable by death.

“I’m going to have a real radical thought here,” Randall said. “I don’t think by and large, there are always exceptions, but I don’t think by and large the average person who is gay or transgendered — or identifies however you’d like to — is hated in America. In fact, I think if you were to compare America to the rest of the world, especially a lot of places in the Middle East where if you’re gay, you’re thrown off the top of a building.”

Later in that same Nov. 26 show Randall repeated the transphobic argument about the safety of children if trans people are allowed to go to the bathroom of their choice.

“My daughter has to go into the ladies room and I have to stand out there and watch who comes and goes,” Randall said. “While she does that, am I supposed to go in there? Some guys went ahead and went in there. I saw some people bring their daughters into the men’s room because they were concerned about this.”

That fearmongering argument is the same one made during the early 20th century by people hoping to enforce bathroom segregation based on race.

“Lia Thomas, the trans swimmer from Penn, I learned something very valuable that the media never told me about this whole controversy about a man winning medals and breaking records, Olympic records and NCAA records and all of the rest,” Randall said. “’Did you just call him a man, Richard? How transphobic are you?’… Does that make me hateful to say I don’t want him in that locker room with Riley Gaines [another female collegiate swimmer] or anybody else? I don’t think that makes me hateful at all.”

While Thomas did win an event at the 2022 NCAA national swimming championships earlier this year, she did not break any NCAA or Olympic records. In her two other events s during the national championships Thomas finished fifth and eighth, respectively, out of ten competitors.

Randall is not the only Colorado conservative to bring up Thomas in their anti-trans attacks, as former GOP Senate candidate Eli Bremer made attacking trans athletes a cornerstone of his campaign when he compared trans athletes competing in sports to prominent sexual abuse cases. Bremer failed to make it onto the Republican primary ballot for U.S. senate as he did not gain enough votes in this year’s Colorado Republican Party Assembly.

Randall has had transphobic guests on his show in the past, regularly agreeing with their points. This includes Bremer and noted anti-LGBTQ activist Matt Baker.

Club Q is one of the oldest LGBTQ night clubs in Colorado Springs and regularly hosts community events such as drag shows.

Sean Price is a writer for the Colorado Times Recorder based in Denver, Colorado. He studied political science and journalism at Gonzaga University. Reach him by email at [email protected]otimesrecorder.com.