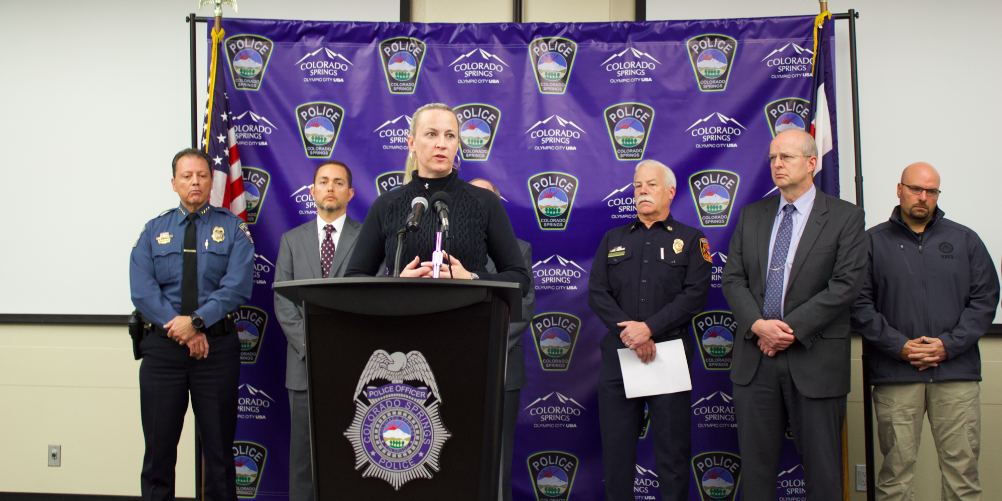 Five people are dead and at least 18 are wounded following a mass shooting at Club Q in Colorado Springs, according to the Colorado Springs Police Department (CSPD). Club Q is one of Colorado Springs’ oldest LGBTQ night clubs, and it regularly hosts drag shows and community events.

As of Nov. 21, CSPD has identified the deceased victims of the shooting as Kelly Loving, Daniel Aston, Derrick Rump, Ashley Paugh, and Raymond Green Vance.

According to Lt. Pamela Castro, the CSPD public information officer, the first calls regarding a shooting at the club came in at 11:56 p.m on Nov. 19. CSPD arrived at 12:00 a.m., and the suspect, identified as 22 year-old Anderson Lee Aldrich, was taken into custody at 12:02 a.m.

“We know one or more patrons heroically intervened to subdue the suspect. And we praise those individuals who did so because their actions clearly saved lives,” said Colorado Springs Mayor John Suthers.

In a statement posted to Facebook, Club Q wrote, “Club Q is devastated by the senseless attack on our community. Our [prayers] and thoughts are with all the victims and their families and friends. We thank the quick reactions of heroic customers that subdued the gunman and ended this hate attack.”

The New York Times has identified Rich Fierro, an Army veteran, as one of the individuals who intervened to stop Aldrich.

“Club Q is a safe haven for our LGBTQ citizens,” said CSPD Chief Adrian Vasquez. “Every citizen has the right to feel safe and secure in our city, to go about our beautiful city without fear of being harmed or treated poorly. I’m so terribly saddened and heartbroken.”

Vasquez cautioned that the investigation is still in the early stages, and noted “The FBI is already on scene and assisting with the investigation. We are also working to identify the victims who have died and notify their families.”

Vasquez reported that at least two firearms were found on the scene, and that a “long rifle” was used in the shooting.

On June 18, 2021, Aldrich was involved in bomb threat in the Lorson Ranch neighborhood. According to a news release from the El Paso County Sheriff’s Office, “The reporting party said her son was threatening to cause harm to her with a homemade bomb, multiple weapons, and ammunition. The reporting party was not in the home at the time when she made the call and was not sure where her son was. Deputies responded to the home and after further investigation realized the suspect, Anderson Lee Aldrich, DOB: 05/20/2000, was in the 6300 block of Pilgrimage Road (which is approximately 1 mile away from the address on Rubicon Drive). Our deputies contacted the suspect by phone and he refused to comply with orders to surrender.”

Deputies evacuated the neighborhood, and over an hour later Aldrich surrendered. According to the El Paso County Sheriff’s Office, “The Regional Explosives Unit cleared both homes and did not find any explosive devices.”

Though Aldrich was charged with two counts of felony menacing and three counts of first-degree kidnapping, the Colorado Springs Gazette reported that “no formal charges were pursued in this case, which has since been sealed, according to the DA’s office.”

Michael Allen, the 4th Judicial District Attorney, who declined to charge Aldrich in 2021, expressed sympathy for the victims and their families. “This is a tragic day for our community, and we stand in solidarity with the victims and their family members as we make sense out of a senseless crime,” he said. “Every person, regardless of who they are, has the right to be secure from fear and physical harm. Actions taken to strike fear in specific communities will not be tolerated in our community. This is particularly true for communities that have been maligned, harassed and targeted by persons or groups to intimidate and cause harm to members of those communities.”

According to Allen, Aldrich is the only suspect at this time.

“The Club Q shooting in Colorado Springs was horrific, sickening, and devastating news to wake up to,” said Governor Jared Polis, Colorado’s first openly gay governor, in a Facebook post. “My heart breaks for the family and friends of those lost, injured, and traumatized in this horrific shooting. I have spoken with Mayor Suthers and clarified that every state resource is available to local law enforcement in Colorado Springs. We are eternally grateful for the brave individuals who blocked the gunman, likely saving lives in the process, and for the first responders who responded swiftly to this horrific shooting. Colorado stands with our LGTBQ community and everyone impacted by this tragedy as we mourn.”

The Club Q shooting comes after more than a year of conservative politicians and commentators demonizing the LGBTQ community and holding increasingly violent protests against drag events. This summer, Rep. Dave Williams (R-CO Springs) and Rep. Mark Baisley (R-Roxborough Park) raised concerns about “groomers” at a Highlands Ranch drag show. U.S. Rep. Lauren Boebert (R-CO), who in June said, “The left is grooming our kids,” tweeted this morning, “The news out of Colorado Springs is absolutely awful. This morning the victims & their families are in my prayers.”

Rep.-elect Stephanie Vigil (D-CO Springs), who defeated Colorado Springs City Councilor Dave Donelson, who campaigned on his anti-LGBTQ stance, expressed shock — but not surprise — at the news of the shooting. “I’m just furious,” she said. “I don’t know how many times we have to say that hate speech and bigotry have consequences. I feel like a number of us have said in this community over the last few years in particular that it’s just a matter of time. Right here in our own city. The things that people say that dehumanize others in our community tend to lead to violence. It’s not even the first time.”

Colorado Springs City Councilor Nancy Henjum also expressed her shock and dismay at the violence. “How many times do we have to do this?” she asked. “There’s no words, honestly. I’m deeply, deeply sad for the people who lost their lives, for their family members, for our entire community, certainly for the LGBTQ community.”

Inside Out Youth Services, a nonprofit that serves LGBTQ youth in Colorado Springs, said in a statement, “We are absolutely devastated by the horrific act of violence at Club Q in Colorado Springs last night. Our community is mourning the loss of five loved ones today, along with their friends and family. Here in Colorado Springs, Inside Out Youth Services works with young people every day to build community. The youth we serve deserve better — they deserve to be safe from fear, threats, and violence. We call on Colorado’s leaders to step up and condemn this hateful attack and condemn the anti-LGBTQIA2+ rhetoric that fueled it. Today is Transgender Day of Remembrance, when we mourn the lives of transgender people who have been killed. This mass shooting has compounded the pain already felt so keenly by our community.”

RELATED: God Is with Those Fighting Against LGBTQ People, Says Keynote Speaker at Christian Fundamentalist Gathering Near Colorado Springs

Editor’s Note: This story has been updated to include the names of the five people murdered on Nov. 19, and to identify Rich Fierro as one of the individuals who intervened to stop Aldrich.