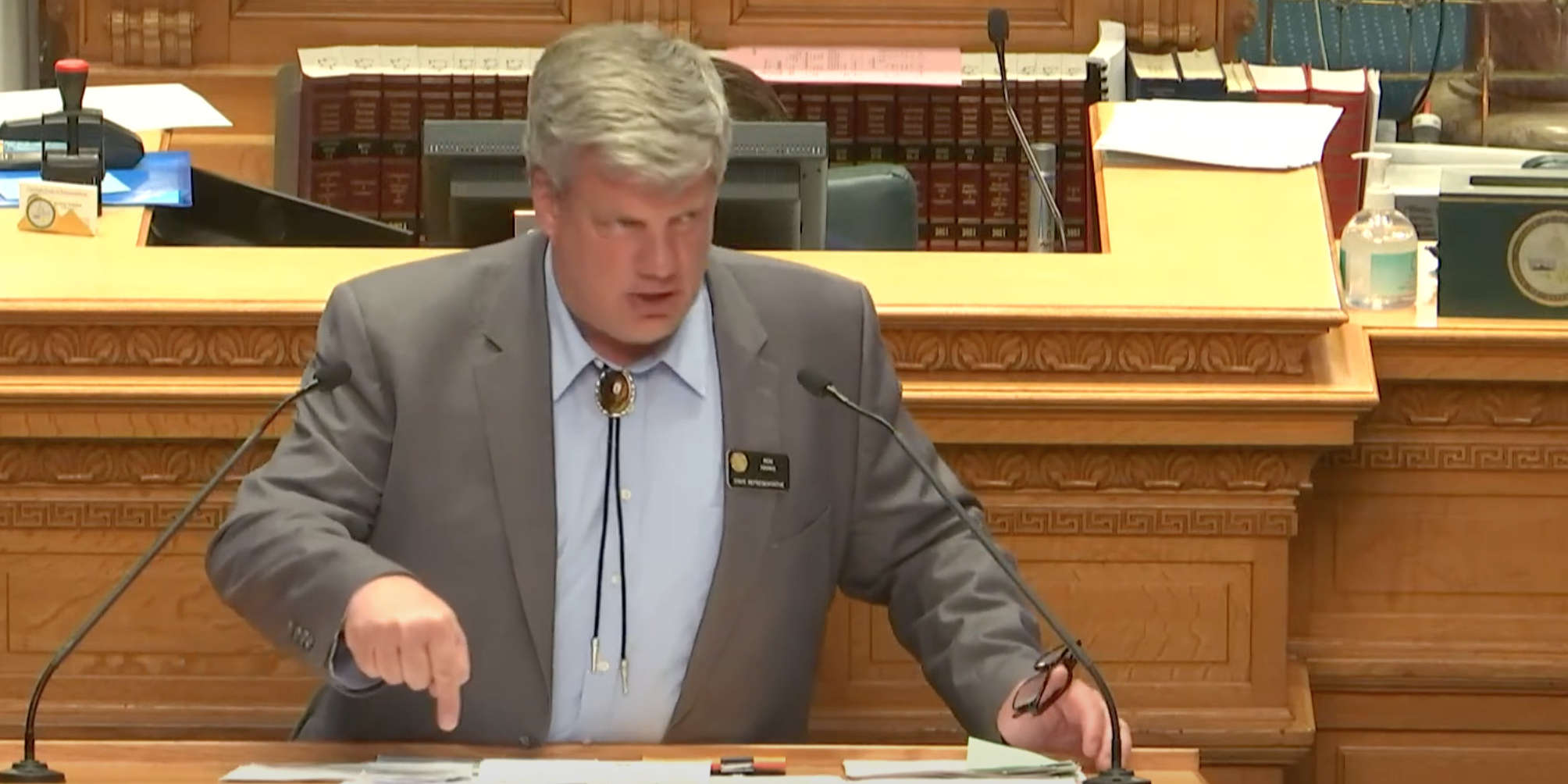 Republicans repeated baseless election fraud conspiracies while advocating for amendments to a proposed election security bill in the Colorado House of Representatives Wednesday. The claims were part of a Republican filibuster that led to the hearing taking more than nine hours.

House Republicans tried to attach several amendments to the bill. The amendments, which all lost, are based on claims of election fraud in the 2020 election that have been roundly debunked by independent fact-checkers, election officials, and court systems.

“Elections belong to the people,” Hanks said. “These systems are not secure. They’re not secure in any sense of the word, and they ought to be.”

The various amendments include attempts to add watermarks to paper ballots, remove dead voters from voter rolls, and allow counties to provide sensitive voter information from copied hard drives to external entities. In March, election fraud conspiracist and Mesa County Clerk Tina Peters was indicted for doing just that with voter information from the 2020 election.

While speaking on the House floor Hanks also talked about a canvassing program that attempted to prove that election results in 2020 were fraudulent. Hanks said the program, conducted by conspiracist group U.S. Election Integrity Plan (USEIP), found hundreds of thousands of examples of illegal votes, voter database manipulation, and dead voters.

“These assertions are stunning,” Hanks said during the hearing. “Extrapolating the canvassed county findings to the entire state the number of impacted voters in Colorado are between 210,091 and 462,201. The USEIP report exposes shocking problems within the Colorado election system.”

The USEIP is a Colorado-based group founded on the “big lie” that the 2020 presidential election was stolen from Donald Trump. The group, which also organized a caravan to the Jan 6 insurrection, sent its volunteers, some of whom were armed, door to door in counties across the state, in search of so-called phantom votes they erroneously believe flipped the election to President Biden. In March, the group released its “Colorado Canvassing Report” which claimed to prove widespread irregularities in election results.

As Colorado Newsline’s Quentin Young comprehensively outlined last month, the report should not be trusted as remotely accurate.

In March a trio of civil rights groups, the NAACP, the League of Women Voters of Colorado, and Mi Familia Vota filed suit against USEIP over its canvassing operation. The groups argue that USEIP violated the Voting Rights Act through “intimidating, threatening and coercive conduct.”

Hanks is an election fraud conspiracy theorist who is also running for U.S. Senate to take on incumbent U.S. Sen. Michael Bennet (D-CO). Hanks attended the 2021 riot at the U.S. Capitol and has been public about his plans to train poll watchers for the 2022 elections.

Also during the hearing, Rep. Andres Pico (R-Colorado Springs) said he supported an amendment to the Colorado Election Security Act that would require each county clerk in the state to conduct a comprehensive audit of voter registration records.

“How do you know you don’t have a problem if you never check? That’s what an audit does. It checks that you’re following a process and your results are accurate and people can have faith in your results. That’s what a comprehensive audit is. If you think everything is fine what have you got to be afraid of.”

Comprehensive, or so-called “forensic” audits are time and resource-consuming and are often, such as in Arizona and Michigan, little more than political stunts. Colorado also has a “gold-star” election security system that renders full comprehensive audits redundant.

“The data is pretty striking,” Hanks said. “This [the USEIP canvassing] had to be done by volunteers. This amendment codifies it. Let’s support this amendment.”

State Rep. Chris Kennedy (R-Lakewood), chair of the House State, Civic, Military and Veterans Committee that held the initial hearing on the bill, criticized the Republicans repeating these conspiracy theories in a statement released yesterday.

“Conservative leaders in the legislature used the debate on this bill to attack our election system and spread baseless and unproven conspiracy theories,” Kennedy said. “It’s important to pass this common-sense legislation, which is supported by the county clerks, to prevent insider threats and protect our democracy. It’s a shame that GOP lawmakers refuse to support this bill and have become too blinded by partisan rhetoric to see that this bill is simply common sense and should have their support.”

The Colorado Election Security Act also seeks to improve training for clerks and election workers, makes knowingly publishing passwords or other confidential information a felony, and prohibits election officials and candidates from tampering with election equipment.

“Colorado is taking steps to defend our elections from insider threats and ‘Big Lie’ conspiracy theorists who have used their positions to jeopardize our elections,” said Lontine, one of the bill’s sponsors. “Our gold standard elections system leads the way nationally when it comes to voter access and election security. This common-sense legislation strengthens our elections system and will hold people accountable when they break the law and tamper with election equipment. It also bars anyone convicted of an election crime from overseeing our elections.”

After the hearing, the House advanced the Colorado Election Security Act on a preliminary voice vote.