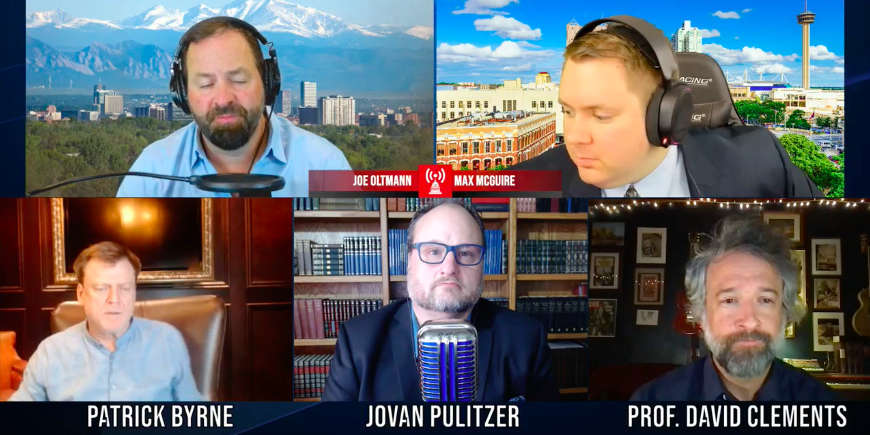 Former Dominion Voting Systems executive Eric Coomer filed another defamation lawsuit against former Overstock.com CEO Patrick Byrne on Friday for his 2021 film “The Deep Rig,” which prominently featured Douglas County podcast host and election conspiracist Joe Oltmann. Byrne wrote a self-published book of the same name and served as a co-star and producer of the film.

In December, 2021, Coomer filed a separate lawsuit against Clay Clark, an Oklahoma-based entrepreneur and host of the ReAwaken America Tour, which prominently featured election deniers such as Oltmann, Michael Flynn, Seth Keshel, and others.

Byrne’s codefendants in the latest lawsuit include The America Project, the 501(c)4 nonprofit he started with Flynn, and Steven Lucescu, one of the producers of “The Deep Rig.” The New York Times today reported that The America Project has donated $100,000 to Citizens for Election Integrity, a PAC that has recently paid for advertisements attacking Mesa County Clerk and Recorder Tina Peters’s primary opponent in the Colorado Secretary of State race, Pam Anderson.

Coomer’s latest lawsuit accuses Byrne and Lucescu of profiting from the false and defamatory claims from Oltmann and others featured in the film. The complaint notes, “‘The Deep Rig’ lays out a series of disparate and unsubstantiated conspiracy theories that the election was somehow rigged. The Film’s variety of claims are premised on logical fallacies, non sequiturs, technical impossibilities, disproven factual assertions, and QAnon tropes.”

The complaint also notes that claims about Dominion Voting Systems and Coomer were central to the film’s claims. “In some degree, however, every proposed theory features some element casting doubt on the reliability of voting machines manufactured by Dominion, Plaintiff’s former employer,” reads the 68-page complaint. “To that end, the Film seizes on the baseless claims and obvious lies of Colorado conspiracy theorist Joe Oltmann, who in the days after the 2020 presidential election was called for President Biden, made up a story that he had overheard Dr. Coomer claim on an ‘Antifa conference call’ months before the election that Dr. Coomer had made sure former President Trump would not win. The Film presents this fabrication as the dramatic lynchpin of a supposed plot to steal the election.”

In addition to Oltmann, “The Deep Rig” features a variety of election conspiracy figures, like Jovan Pulitzer and Bobby Piton. “The Film also features a handful of other election fraud conspiracy theorists, many of whom made names for themselves after the 2020 election by proposing their own competing but occasionally overlapping theories about how the election was supposedly rigged,” reads Coomer’s complaint. “Like Oltmann, the other cast members all embarked on their own imaginative journeys to come up with a plausible theory about how Trump did not in fact lose, and, like Oltmann, they all quickly found a means to monetize their audience’s disappointment in the election results. … Defendants were able to herd this fractious confederacy in front of a film crew for long enough to cobble their cultural grievances and QAnon plotlines into an almost coherent work of propaganda. The theories were not built to last, and the alliance of grifters that came up with them was bound to splinter in the resulting competition for a shrinking pool of GiveSendGo donors willing to finance their half-baked hypotheses.”

Many of the individuals featured in the film, despite their shared sense of purpose during the Arizona election audit, have since fallen out with each other over various grievances. Byrne has taken issue with Oltmann’s repeated calls for violence, while Oltmann mocked Byrne’s attempts at asking fellow Coomer defendant Guiliani for a pardon in January, 2021. Pulitzer, whose “kinematic artifact detection” theory — that the ballots themselves were a source of fraud during the election — has been widely panned by election conspiracists, including Shiva Ayyadurai, also known as “Dr. Shiva” in election fraud circles. Pulitzer also had a falling out with Oltmann: They accused each other of being grifters without proper qualifications or expertise to uncover the alleged fraud in the 2020 election. Lin Wood, a South Carolina lawyer and prominent QAnon figure who worked with Bryne on a report of the Dominion machines, according to Coomer’s complaint, removed Oltmann and New Mexico election conspiracist David Clement from the board of his 501(c)4 nonprofit, Fight Back.

“Since the time of the Film’s release, however, many cast members have fallen out with one another, often publicly accusing each other of various forms of fraud on social media in the process,” noted the complaint.

Additionally, Coomer’s complaint accuses Byrne and Lucescu of monetizing the false claims of election fraud. “This has been set up, thanks to Steve [Lucescu] and Roger [Richards’s] brilliance, as a way people can really make money out there,” Byrne is quoted in the complaint. “And I mean good money. Just for your reference, each one of these wedges holds about six hundred people, say, if it’s full. You can get a license to show this movie at a dollar a seat. So you can rent a local theatre, is it a minimum of $200, or $500? Five hundred. So rent a local theatre with 500 seats. You pay 500 dollars for the license to show that once, you fill it, sell the seats. I don’t know what a movie ticket costs these days, fifteen bucks? You know, you keep the rest. You’re giving us 500 bucks, make 8,000 in revenue, pay us the 500. This has been priced so that patriots can make money. This has been priced so that people can make good money by taking a couple afternoons and organizing something like that. You can make a few thousand dollars I think, or more. And there’s no reason you can only do it once.”

Coomer’s complaint is seeking actual and special damages against the defendants, disgorgement of profits derived from the film, attorney’s fees and costs, and prejudgment and post-judgment interest, among other requests.