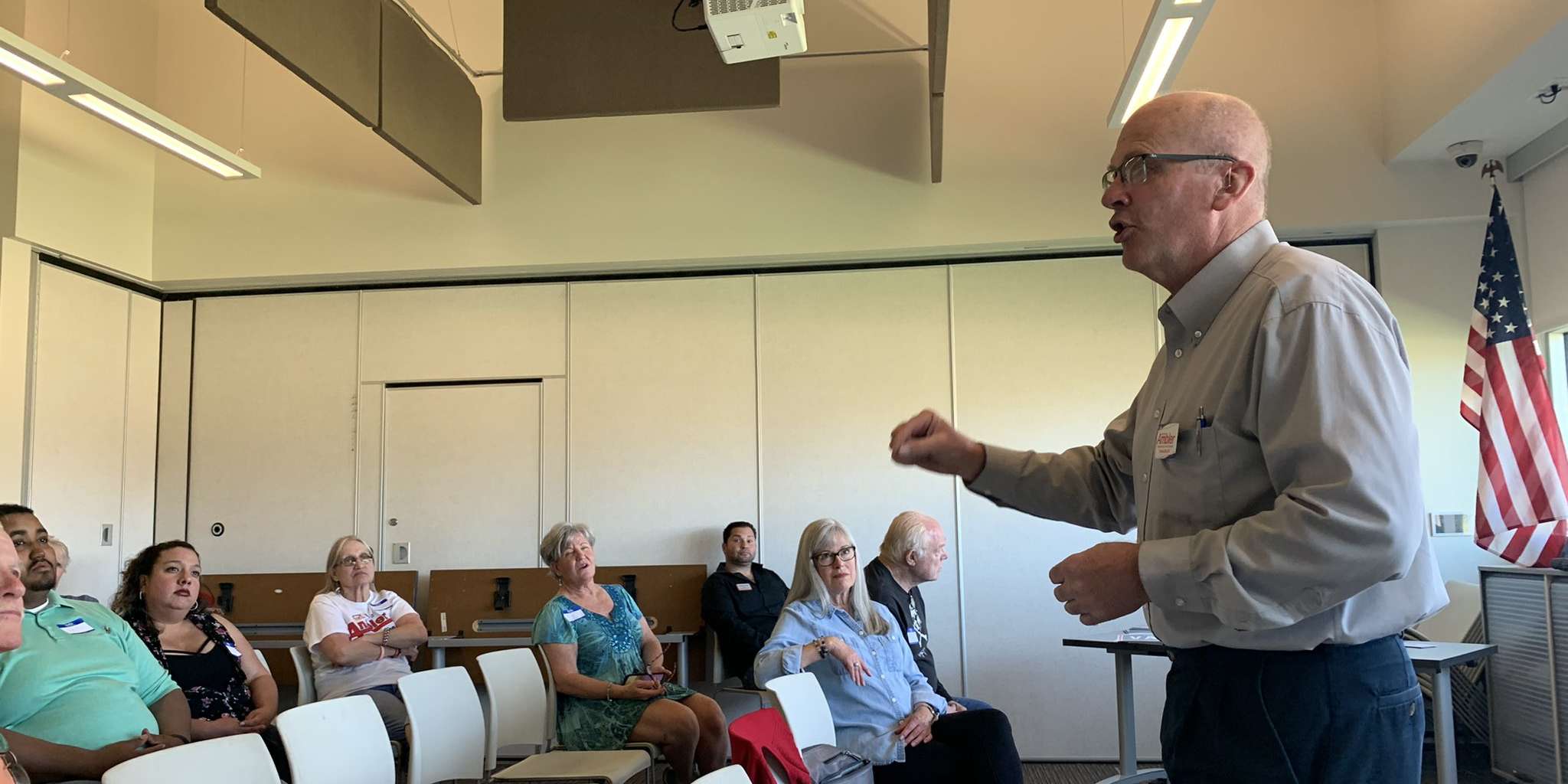 The term-limited Colorado House Majority Leader, Rep. Daneya Esgar (D-Pueblo), is leaving some big shoes to fill at the Capitol. In Pueblo, a pair of experienced Democrats, Tisha Mauro and Jason Muñoz, will be competing in the June 28 primary to challenge Republican Jonathan Ambler for Esgar’s seat.

Ambler unsuccessfully ran against Esgar in 2018 and in 2020, when he received 43% of the vote to Esgar’s 53%. Like many Republicans running in 2022, Ambler highlighted popular conservative grievances against education, abortion, and Disney during an April 30 candidate event with Pueblo Senate candidate Stephen Varela.

“I never thought I would live in the country that I live in today, and I worry about my grandchildren growing up in this country that we’re in,” he said to an audience at the Greenhorn Valley Library in Colorado City. “I was one of those people that believed, ‘Oh, it’s a Disney movie, go watch it, I got other things to do.’ Now, I wouldn’t trust anything Disney makes without watching it first and checking. That’s the country that we live in today. We don’t feel safe about anything. We worry about our kids going to school, and we used to worry about the bullying, but now we worry about what the teachers tell them.”

Ambler blamed the Democrats for what he perceived as the major problems facing Puebloans. “A certain party has had control of our government for four years now,” he said. “These are the results. If we don’t change what we’re doing we’re going to continue to get more of what we’re getting.”

Of particular note for Ambler was Colorado’s Reproductive Health Equity Act (RHEA), the landmark legislation sponsored by Esgar that enshrines the right to an abortion under Colorado law. “It changes common law that we’ve had for hundreds of years, that hey, you get born, you got rights,” he said. “Not in Colorado. The bill you’re referring to, 1279, has two other problems, I have it. They are the complete elimination of rights for a fertilized egg, an embryo, and a fetus. Technically, with that law we can trade those three things — things, not humans but things — on the open market. Is anybody good with that? Let’s face it, under that law we can start serving fetuses in restaurants. … At issue here is the socialist doctrine that the government has the right of life, not people. If they have right of life, they can kill anybody they want to.”

Ambler is not the only Republican to make hyperbolic or misleading statements about RHEA, but he is the first to suggest that the law will allow for consumption of human fetuses. Ambler is also collecting signatures as one of the designated representatives for 2022 ballot initiative 80, which addresses campaign expenditure limits.

Muñoz, a lifetime Pueblo resident and experienced political campaigner, is hoping to leverage his experience working on campaigns for politicians like former Rep. Sal Pace, former Sen. Abel Tapia, and former Rep. Diane Mitsch Bush. Muñoz had originally hoped to replace Sen. Leroy Garcia (D-Pueblo) when he resigned, but came in second during the vacancy search to Sen. Nick Hinrichsen (D-Pueblo), who is running against Varela.

“Working on all these congressional campaigns and running for office in 2016, it let me build a network of people,” said Muñoz. “I worked with many different folks, both volunteers, elected officials, activists, unions, and it made me feel what I was doing was having an impact.”

Muñoz says his main legislative priority is the economy. “We need more livable wage jobs in Pueblo,” he said. “Too many folks I know are working two or three minimum wage jobs and they’re still trying to get assistance, they’re on SNAP. They’re working their butts off and they’re not seeing any upward mobility. That’s one component, the economic factor, and just doing what I can to incentivize businesses to move to Pueblo, hire Puebloans, and pay Puebloans a good, decent, livable wage so they can afford to purchase their first home or expand to a larger home if their family is growing. I think we have a morale issue in Pueblo, and I want to do everything I can to change that narrative, help people realize that there are opportunities. I think if we can create conditions to help bring more, better-paying jobs to the community, that’s going to help the community, not only economically but socially, culturally. We’re on the cusp of great growth here in Pueblo, and people are already starting to move here, and I want to help be a voice going into this next era of Pueblo that will help to maintain our identity, with an eye towards the future.”

Though Pueblo is viewed by some as Democratic stronghold, Muñoz isn’t taking anything for granted. “I believe that we’re going to have a better vision than Mr. Ambler, in regards to the interests of the voters of House District 46,” he said. “This is not a guaranteed seat for a Democrat. I think that we have an advantage, but that doesn’t mean we can just lay down and expect the voters to turn out.”