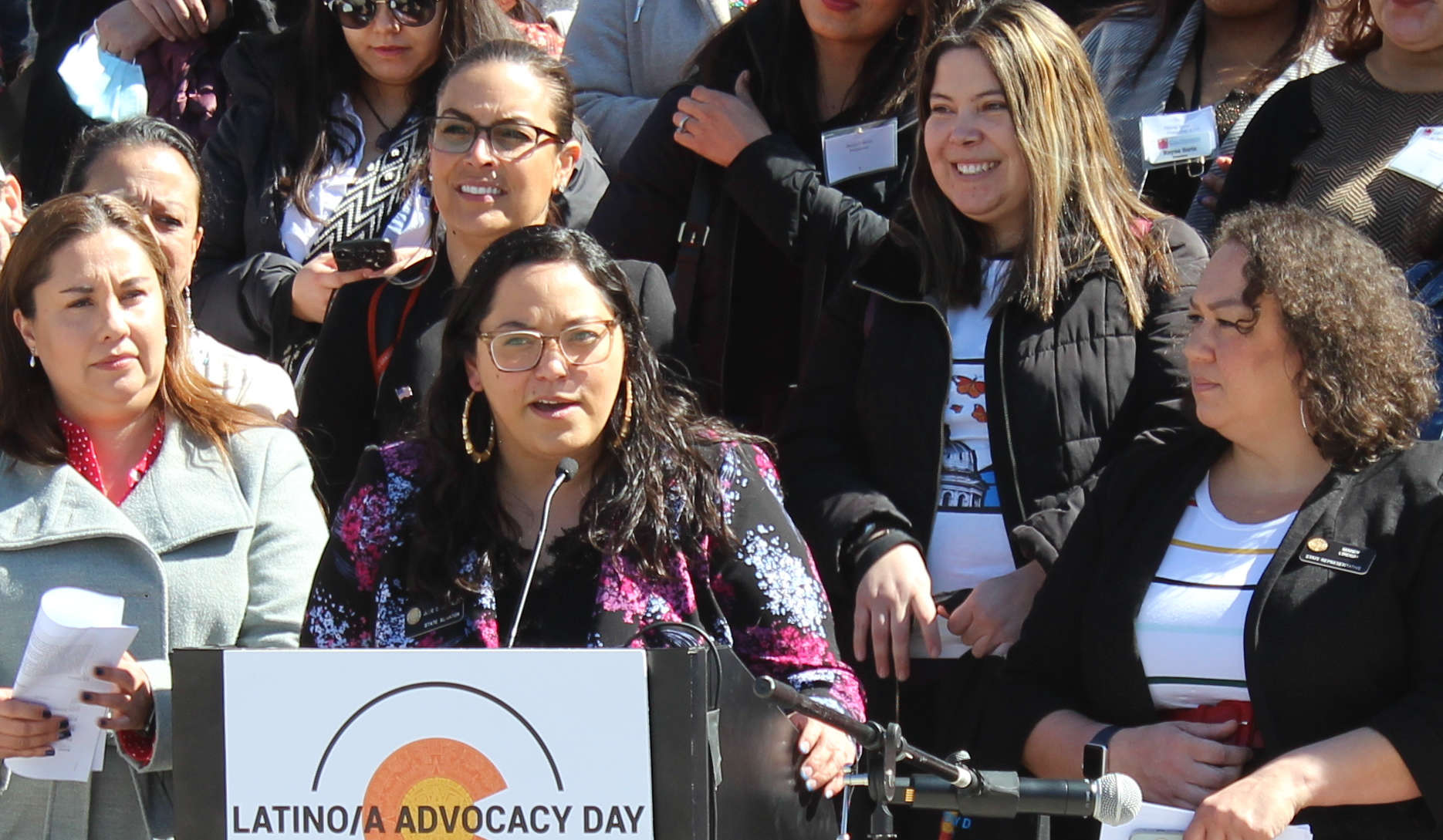 During the midday rally, several members of the state’s Democratic Latino Caucus stood before the enthusiastic crowd that had assembled on the Capitol steps chanting slogans in Spanish such as “¡Sí, se puede!” (“Yes, we can!”).

The lawmakers pledged to continue supporting Colorado Latinos through policies that promise to expand voting access and reproductive health equity.

“The Latino community is obviously a powerful force,” state Rep. Yadira Caraveo (D-Thornton) said to the crowd. “And by uniting to advocate for our community, we can accomplish whatever we put our mind to.”

Caraveo, whose parents emigrated from Mexico, is a first-generation college graduate and physician who’s been in office since 2018. She is currently running as a candidate for the U.S. House of Representatives.

One of her proudest achievements while in office, Caraveo told the crowd, has been passing the Multilingual Ballot Access bill, which will provide ballots in Spanish as well as a translation hotline in communities with a high proportion of Spanish speakers.

Along with state Sen. Sonya Jaquez Lewis (D-Lafayette), who also spoke at the event, Caraveo also co-sponsored a successful reproductive health care bill last year that gave undocumented immigrants access to contraception and enabled Medicaid users to receive a year’s supply of birth control all at once. The measure became law in July, 2021.

Other speakers at the rally emphasized a need for improved access to health care in general, particularly in light of the pandemic.

“I worked at a mass vaccine clinic this past year and saw firsthand how COVID-19 disproportionately affected low-income communities and communities of color,” said state Rep. Mandy Lindsay (D-Aurora), a new member of the Latino Caucus. “And I’m here to work to get people the help and access they need.”

Lindsay also underscored the importance of civic engagement and participation in government, and encouraged her constituents to call their local representatives, attend meetings, and voice their concerns.

When state Sen. Julie Gonzales (D-Denver) addressed the crowd, she said she would like to see more Latinos running for local and state government to represent the growing Latino community in Colorado.

“We have made historic gains, but we’re still not at parity,” Gonzales said. “I want to see more of you all join us at the state Capitol wearing these elected official name badges, wearing these Senadora name plates.”

A former activist, Gonzales said she never thought she would run for office, but she was inspired to do so by Crisanta Duran, a former state representative who served as the first Latina Speaker of the Colorado House.

Gonzales encouraged Latinos to get involved in politics, to be their authentic selves, and to advocate for the policies that are needed in the community. She also gave a special welcome to those who were new to attending Latino Advocacy Day.

“For those of you who this is your first time here,” Gonzales said, “dude – mis respetos for real, y’all.”

In a moment that drew chuckles from the crowd, Gonzales’ face mask became tangled in her hoop earrings. She made self-deprecating jokes as she fixed her mask, joining the crowd in their laughter.

Participants at the event commented on Gonzales’ relatability and how inspired they felt after attending the rally.

“Julie Gonzales is just an incredible human and advocate for our community,” said Rachel, a graduate student in social work at the University of Denver who attended the rally. “And to see her with her big-ass hoops, like, fixing her mask – I was like, I can’t,” she added with a laugh.

“Plus, we get to go lobby her,” said another participant who identified himself as Ren. After the rally concluded, the group started heading up the stairs into the Capitol, where they were scheduled to lobby state legislators.

Latino Advocacy Day has been celebrated since 2007 and was formally recognized by the Colorado Legislature in 2020. This year’s event was organized by advocacy groups such as Colorado Organization for Latina Opportunity and Reproductive Rights (COLOR), Protégete and Voces Unidas de las Montañas.

The two-day-long event, which began yesterday, has included training sessions on reproductive, environmental, immigrant, economic, criminal, and education justice, as well as plenary sessions on Latino policy agendas and voting.