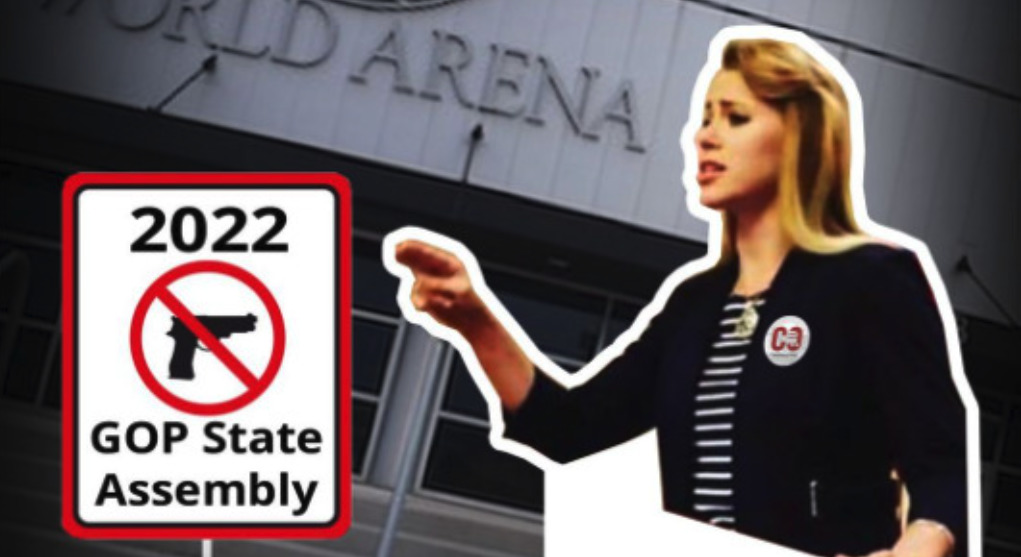 Burton Brown told Randy Corporon on his conservative talk radio show (710AM, KNUS) last Saturday that the only venue that didn’t require proof of vaccination, the Broadmoor World Arena in Colorado Springs, would nevertheless prohibit attendees from carrying firearms.

Burton Brown explained her decision in an email to delegates that she tried to get an exception to World Arena’s no-firearms policy, but was foiled by the free market.

“I have personally, specifically asked the World Arena for a different entrance for those with CCWs. I’ve also specifically asked for off-duty law enforcement to be given an exception to carry guns. The World Arena denied both of my requests. The reason we were granted this exception at CU Boulder in 2018 for our delegates is because CU is a public entity. World Arena is a private entity and we unfortunately don’t have the same legal arguments or precedents available to us to force a change.

People have asked why we chose the World Arena. Here’s why: The World Arena was the only option we had in the state to hold our 2022 Assembly. We had to sign contracts when Polis’ extreme COVID restrictions were still in place.

These restrictions were causing arenas and facilities across Colorado to require vaccine cards, vaccines, and masks — all of which I knew would not work for our delegates. World Arena gave no exception to the Trump Rally in 2020 either, and they’ve refused to give me the exceptions I have requested to support our CCW holders. I am proud that we were able to secure a facility that would not hold our delegates to anti-freedom vaccine and mask requirements that other locations required.”

However, that decision is now drawing heated criticism from prominent state Republicans, at least one of whom has vowed to boycott the assembly, where elected delegates from across the state will decide which GOP candidates are awarded a spot on June’s primary ballot to determine the party’s nominees.

Burton Brown and Corporon, who is an executive officer of the party as Colorado’s Republican National Committeeman, both agreed that delegates would likely be resistant to showing proof of vaccination, following the extended polarizing and politicized national debate around public health mandates by government agencies and private business protocols, most of which were opposed by conservatives, based on principles of privacy and medical freedom.

“It sounds like that’s a pretty decent trade-off,” Corporon commented, regarding the choice of the Colorado Springs venue, “because nobody would have shown up with vax cards. That eliminates an awful lot of delegates.”

“Right?” responded Burton Brown. “It would eliminate pretty much 99% of our delegates, most likely. Because even though — as you know, Randy — even though Republicans certainly got vaccines, but we don’t really have to show a vaccine card. No one deserves to know our own private medical information. That’s a huge issue among the counties that passed resolutions. One of the number one issues is the pro-life issue, election integrity, and medical freedom. [Those are] huge, huge issues across the state to Republicans.

Burton Brown further qualified the decision when Corporon asked about security arrangements at the assembly venue and acknowledged that guns would not be allowed in the arena.

“Yeah, which I’m — honestly, Randy — super disappointed about,” Burton Brown said. “I personally asked the arena if, you know, they would give us a separate entrance for concealed carry holders, if they would allow off-duty officers, law enforcement officers, and our sergeant at arms to carry arms, guns at the arena. All of that was denied. I personally requested it myself; [i was] unfortunately denied. And, you know, we had to choose an arena that wasn’t going to force vaccine cards, that literally some arenas across the state we’re doing at the time we signed the contract. And we knew our delegates would absolutely not want that. So, you know, a lot more restrictive year in what options were available to us. So, I’m very disappointed in the lack of arms being allowed at the arena, by the arena itself.

Reams appeared on KNUS’The George Show with George Brauchler this morning and said he would not be attending the state assembly.

“This state assembly that you would normally be at — I think you’ve been in almost every damn thing I’ve ever been to — you’re not going to go. What’s going on?” Brauchler asked Reams

“Yeah, I’ve had to make the decision not to go,” explained Reams. “And, you know, Kristi [Burton Brown] outlined what happened with them trying to find an events center to host the state assembly, and unfortunately [they] signed a contract with a private venue that is telling us we can’t carry our weapons on the floor. We can’t be armed in the arena. My stance on the Second Amendment is unwavering, and I just can’t attend. … And I think if delegates had just been told, ‘Look, this is the situation. This is what we’re having to agree to. You should know going and you’re going to have to make a decision of whether or not you want to come because you can’t bring a firearm,’ if they would have just told us that going into it — because every one of these delegates paid [for] a $65-dollar badge. We’re not going to get that money back. We all understand that. But just be upfront with us. I don’t want to pay $65 to take my gun off and go into the arena that I don’t believe has the right to tell me to disarm.”

Reams was slated to be a delegate at the GOP assembly, telling Brauchler that he was looking forward to supporting Heidi Ganahl for governor and Deborah Flora for the party’s nomination to face off against Michael Bennet (D-CO) for U.S. Senate.

“I don’t have that opportunity now.”  “It’s kind of a sad day… I’m disappointed. This is a big year.”

Due to Reams’ expected absence, his votes as a delegate cannot be cast, and an alternate delegate will vote their own preferences instead.