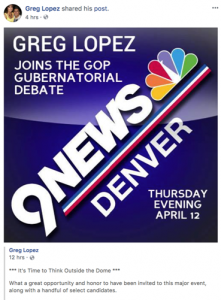 Republican gubernatorial candidate Steve Barlock is mobilizing his supporters to pressure Denver’s 9News to reconsider its decision to exclude him from Thursday’s televised debate.

Barlock was not invited to participate in the event because, in the TV station’s view, his campaign failed to provide evidence of a “viable path to the nomination,” according to 9News political reporter Brandon Rittiman.

With the exception of GOP candidate Lew Gaiter, the other Republican candidates, including businessman Barrah Farah, who joined the race last month, apparently made the cut. Former Parker Mayor Greg Lopez was promoting his appearance in the April 12 debate on Facebook this week.

To make the decision on the viability of Republican candidates, 9News’ political team consulted with the Lincoln Club. For Democratic candidates, 9News brought in the League of Women Voters.

The decisions on the candidates to be included in the debate were unanimous, Rittiman said.

Barlock, who is the former co-chair of the Denver Trump Campaign, slammed the involvement of the Lincoln Club, which he says is aligned with the establishment wing of the Republican Party and has leaders who are formally connected to GOP candidates.

Rittiman maintains that the process is fair, given multiple considerations involved, including giving viewers the chance to hear more from candidates who have the best chance of advancing.

“We’re using the same standard we did at this point in the last election cycle—viability,” Rittiman told me via email. “We’re trying to maximize the time that voters hear from candidates who have a viable path to the nomination. Just as we did in the first GOP senate debate in 2016, what we’ve done is asked candidates to submit evidence of viability. We reached out and asked the campaigns to provide their evidence or arguments of viability. We take a generous look at the evidence the candidates submit and try to err on the side of inclusion. We have another debate that’s coming up before the actual primary election, in which every candidate who appears on the major party ballot will be invited.”

Barlock says he doesn’t “understand how they can judge what’s a valid path to victory” and, in any case, he thinks his path is as valid as any of his opponents’.

Barlock said, to show his viable path, he initially sent 9News only the results of the Adams County straw poll, where he finished first, because he was “time pressed.” After he was rejected, he emailed 9News that he got third pace in the Denver county straw poll, the Broomfield straw poll, Colorado Hispanic Republican Forum, and the Western Conservative Summit.

“I’ve definitely been doing better than Robinson and Coffman for the most part all year, because we knew what we’re doing,” he said. “I refused to send them anything to validate my financials, because it’s none of my opponents’ business how I am raising money,” he added.

Lew Gaiter, the other Republican gubernatorial candidate who was rejected by 9News, along with Barlock, was also critical of the process.

“I think they are making the decision mostly about who has money,” said Gaiter. “And I certainly don’t begrudge any of the people in the race either who have raised a lot of money or who have invested a large about of their own money. I applaud them for doing that. It’s just sad that some in the media have decided that this race will be won or lost by who spends the most money. I would like to think we select our leaders based on more than how much money they have. And I want to be clear: I think there are some good people in the race who have a lot of money. I think I’m better than they are, but we all would say that.”