Abortion Rights Are Safe in Colorado, but Only for Now, Advocates Warn 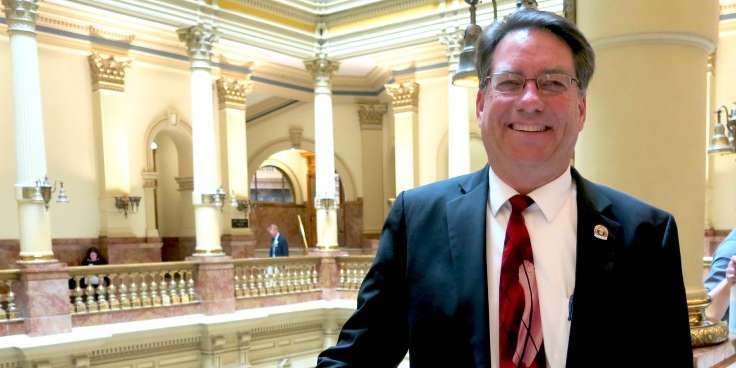 State Senator Jerry Sonnenberg (R-Sterling) explained why he opposed gun bills Colorado Governor Jared Polis signed into law Monday while admitting he often does not know where his own guns are.

One of the two bills concerns the responsibility of a gun owner to report a missing firearm to law enforcement. The other regulates the safest way to store firearms within a house or vehicle.

The stolen-gun bill is named for a Denver woman who was shot and killed last year by a man with a gun stolen from a police officer friend of his.

That’s not the only time a stolen gun has made headlines in Colorado. A sheriff’s deputy in El Paso County had his gun stolen—and recovered—in December. No one was harmed with that stolen gun.

Last week, Sonnenberg (R-Sterling) told KCOL radio host Jimmy Lakey that he took issue with the Colorado legislature telling gun-owners how to be responsible with their guns, and could not see the bill having a substantial impact.

“The purpose of [the stolen gun bill], I have no idea because you can’t — well, I think the damage is already done,” Sonnenberg said. “Someone has your gun or you misplaced it. In my case, I have a number of guns and I don’t know which one of my kids has which gun or my wife took a different handgun.”

The purpose of the bill is to help law enforcement solve crimes more easily and prevent guns from getting into the hands of people who would not normally pass a background check.

Analysis from the Center for American Progress showed that the U.S. has a rampant stolen gun problem and that stolen guns not reported pose a threat to public safety. According to the analysis, almost 20,000 guns were stolen in Colorado from 2012 to 2015 for a total value of $8.5 million.

“There’s a safe storage gun bill that requires you to store your guns in a locked manner so that somebody doesn’t have access to those guns,” Sonnenberg told Lakey. “And so if you live in the country like me, where you’re 20 minutes from the nearest law enforcement officer, and someone breaks into your house and I have to go unlock a cabinet to get my gun out, well, that defeats the entire purpose of this bill.”

The bill does not actually say guns need to be in a locked container, just a “Secure container which a reasonable person would believe to be secure,” according to the bill’s text. The firearm also does not have to be locked if the owner is carrying it.

The purpose of the bill is to prevent accidental gun-related deaths and child suicides. Gun-related suicide attempts account for 40% of successful suicides among teenagers.

A press release from Everytown for Gun Safety, a gun-control advocacy group, praised Polis for signing the two gun bills.

“Our country and our state are in the midst of a crisis,” said Showen. “Too many of our community members, our classmates have had their lives tragically impacted by gun violence. Today, Governor Polis took action. These bills are an important step in directly addressing this crisis and saving lives in Colorado.”