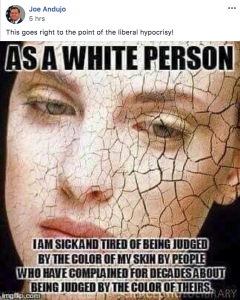 The Colorado Republican Party’s candidate for lieutenant governor apparently backs Trump not only now but also in the 2020 election.

MAGA Trump Colorado describes itself as “dedicated to supporting President Donald Trump and committed to his reelection in 2020.”

“Let’s work together to fulfill his vision of making, and keeping, America great,” states the group’s Facebook page. 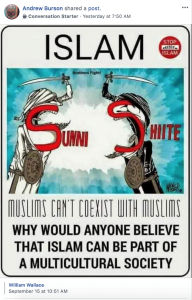 Recent posts on the MAGA Trump Colorado website show bigotry to Muslims and hostility toward people of color generally.

For example, one post states, “WHY WOULD ANYONE BELIEVE THAT ISLAM CAN BE PART OF A MULTICULTURAL SOCIETY.”

Stapleton’s campaign did not return an email to confirm the Facebook post and seeking to know if Sias 1) was aware of the bigotry on the MAGA Trump Colorado site and 2) would consider withdrawing his name from the site.

Another question for Sias that went unanswered: Is there anything Trump could do, or information that could be revealed, that would stop Sias from voting for Trump again, as Sias is apparently committed to doing?

The MAGA Trump Colorado site lists as its Executive Director David Huntwork, who’s a birther  and apparently a bigot and possibly a Christian nationalist, having once wrote:

“Once we start to believe that all religions have equal validity, then this is what you end up with. History tells that this nation was founded by Christians on Biblical principles. One may not like that, but the truth is the truth.”

Huntworth did not respond to an email request for comnent.

Sias’ support for Trump reflects the stance of Walker Stapleton, the GOP’s candidate for governor, who’s said he would like to campaign with Trump in Colorado.