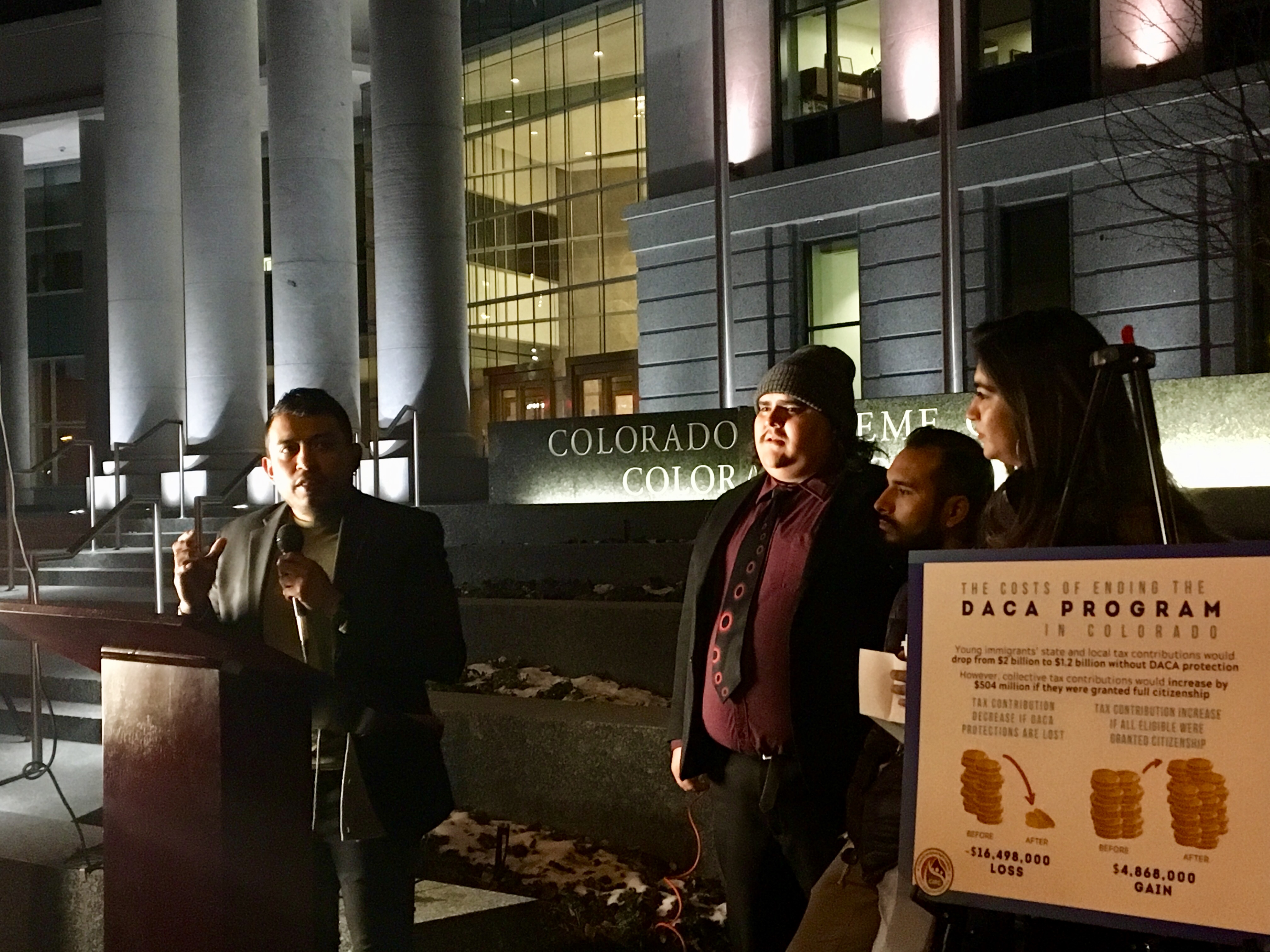 Justices began hearing oral arguments Tuesday on Delayed Action for Childhood Arrivals (DACA), the Obama-era program that allows Dreamers to live, work, and go to school in the U.S. without the threat of deportation. President Trump announced plans to end the program in September 2017 after characterizing the program as unconstitutional and an example of federal overreach under Obama. Trump’s move to end DACA was promptly challenged in lower federal courts, allowing the program to continue temporarily.

Now, the Supreme Court is tasked with deciding whether Trump’s winding-down of the program is compliant with federal law. The question before the court has less to do with whether or not Trump has a right to end DACA, but rather centers on whether the administration took the right procedural steps in doing so and provided adequate reasoning.

Among them was Alejandro Flores, a Denver-based entrepreneur, who spoke to the positive economic impact Dreamer’s have on their communities.

“Dreamers are capable people who, day by day, contribute to the socio-economic and cultural growth of the United States,” Flores said. “About 91 percent of DACA beneficiaries have a job and 5 percent have started their own business, compared with 3.1 percent of the population. I am one of those people.”

Flores added that DACA has allowed him to provide employment to other Americans and pay taxes.

According to the Colorado Fiscal Institue, a progressive economic think tank, Colorado would lose over $16 million dollars in tax revenue if the state’s roughly 17,000 Dreamers lose DACA protections.

“I have been fighting for immigration reform since I was 15 years old,” he said. “We need real solutions from Congress and not just empty rhetoric from people in power. Take this to the U.S. Senate and tell them to get the job done. At the very least give us a vote.”

Galvan urged attendees to contact their members of congress. “Know their names and numbers,” he said. “They have not heard enough from us.”

“We need to defend DACA because it’s our only protection at the moment, but passing a permanent solution such as the Dream and Promise Act of 2019 is the only real way to bring relief to the great injustices our families are enduring,” said Laura Peniche, a local DACA recipient, mother and immigrant rights activist. “I’m tired of living in panic mode. I’m tired of living in fear. I’m tired of missing my mom.”

Many spoke to the sense of chaos and uncertainty that has surrounded their lives as a result of DACA’s precariousness.

“What would it be like to have a normal day?” asked Laura Peniche’s brother Armando Peniche, also a DACA recipient. “I’m torn about being here tonight. It’s great being here in community and feeling the love for DACA, but I wish I was at home and warm and doing homework with my son who needs help and cooking dinner. But I have to be here, because DACA is a roller coaster.”

News outlets reported Tuesday that the court, which skews conservative, appeared poised to side with the Trump Administration.

Before the hearing began Tuesday, Trump attempted to smear DACA recipients as ‘hardened criminals,” a common line of attack from anti-immigrant conservatives.

“This tweet is not only wrong, but defamatory,” said Flores, pointing out that those with criminal records are disqualified from the DACA program.

The court’s decision will be announced sometime in the first half of 2020.