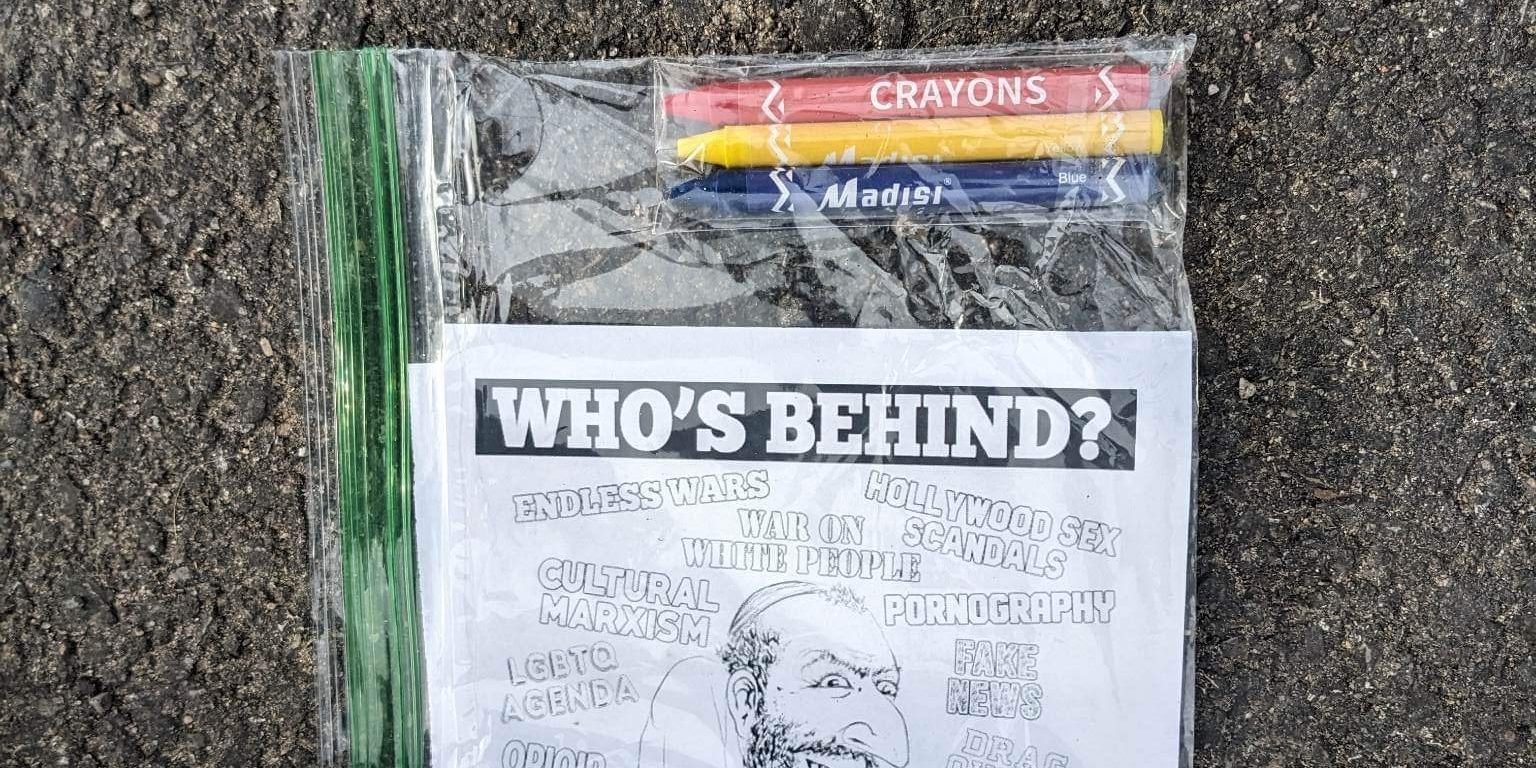 “I thought it was like a coloring book for kids because it was packaged in a Ziploc bag with crayons,” said Megan, a resident who discovered the flyers while walking her dog. “I got to another one, and I saw that there was clearly a really offensive picture, drawing of a Jewish person. I was like, ‘Oh, this is actually really horrible stuff.’ I grabbed that and brought it home and then realized when I got home that there was some in front of my yard and all the nearby houses as well.”

According to the Anti-Defamation League, the Goyim Defense League was responsible for at least 74 antisemitic propaganda incidents in 2021. “GDL’s overarching goal is to cast aspersions on Jews and spread antisemitic myths and conspiracy theories,” notes the ADL. “This includes frequent references to Jews having undue power through their ‘control’ of major institutions such as media networks, the economy or the government, or disparaging Jews as degenerates who molest children and advocate for pornography, abortion and LGBTQ+ communities. GDL maintains that the Holocaust is a Jewish lie, and accounts of the Holocaust are merely propaganda or lies generated by Jews for their own benefit. Similarly, the GDL says that Jews were responsible for the 9/11 terrorist attack on New York.”

According to the ADL, “The most zealous GDL actors are in California, Colorado, Florida and New York. They work alone, in small local cliques and occasionally travel across the country to participate in extended antisemitic events they refer to as “Name the Nose” tours.”

The Colorado Springs Anti-Fascists recently identified Devin Murdock, a 53 year-old Westminster man, as being behind recent similar flyer drops in Parker, Denver, Arvada, and Castlerock in early 2022. Aurora resident Vincent Bertinelli has also been involved in banner drops and other activities with the group. In 2020, members of the Goyim Defense League hung a banner that read “Never Forget Jews Did 9/11” off an Interstate 25 overpass. In 2019, Goyim Defense League members dressed in large white yarmulkes and fringed prayer shawls handed out fliers promoting Holocaust denial on Boulder’s Pearl Street mall.

Megan said her initial reports to the Grand Junction Police Department were dismissed. “I had called the non-emergency dispatch line right away, and they were extremely dismissive,” she said. “They told me to just throw it away and that it’s like if somebody had  a yard sign that they disagree with or someone saying bad things on the internet, that we just have to ignore it. I tried to say, doesn’t this stuff kind of lead to violence? And if something does happen, don’t you want to know that this is going on? They just said that they couldn’t take a report because there was no crime. I asked if they could just log it, at least in some sort of way. and the officer told me that the lines are recorded, so it would be documented in that way.”

Kelly Clingman, the GJPD public information officer, says residents should report any information they might have about this incident to GJPD. “The Grand Junction Police Department takes harassment of any kind seriously,” she said in an email. “We ask anyone who has received this type of mail to call 911 so an officer can take that report. A report can also be filed online at gjcity.org. We ask citizens to keep any delivered hate mail and any surveillance video for officers to collect. We want to remind citizens that the safety of the community is our top priority and if someone feels unsafe, they should call 911.”