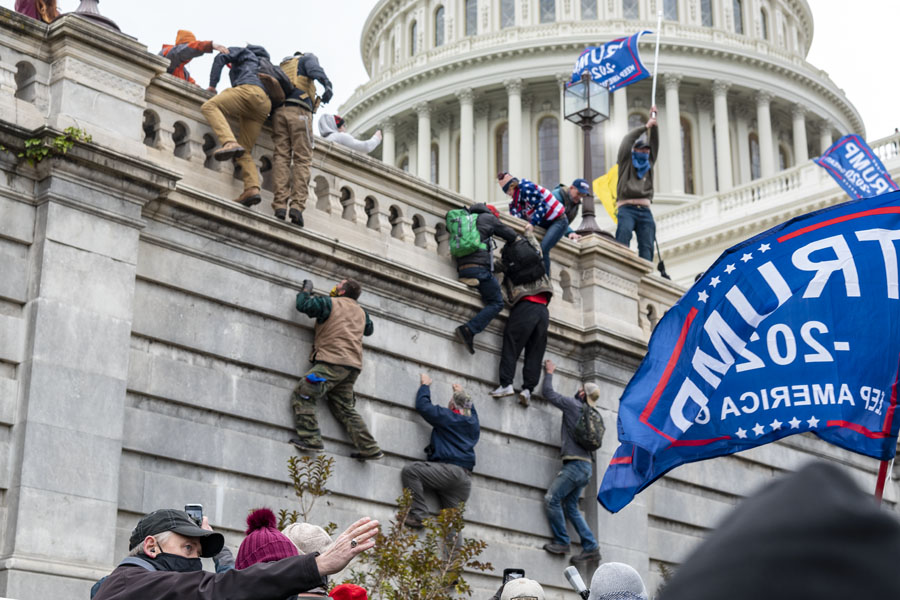 In a March 17 Facebook post, Calandra (Vargas) O’Hanlan, a former GOP congressional candidate, announced that she had been surprised at her residence early that morning by two FBI agents inquiring about the January 6 storming of the U.S. Capitol by attendees of a rally calling for election integrity, an event which O’Hanlan had also attended.

Reached for comment, O’Hanlan denies committing any crime at the rally or the Capitol and says she was peacefully protesting.

She offered the FBI agents her personal photographs and videos from that day and gave her account of events. She said she was proud to have attended the rally with her brother.

Characterizing the FBI interview as a positive experience overall, O’Hanlan described the agents as “nice and professional,” and “honest.” And she expressed to them her general support for law enforcement.

Apparently though, the FBI agents weren’t the only ones asking questions. O’Hanlan asserted in her post that she pressed them for answers also.

She said she teased the FBI agents about “creeping up on her without notice.”

In discussing her Facebook post, O’Hanlan said she has conflicting thoughts about the FBI investigation. While she wants to respect the authority of the FBI and understands the need to investigate crimes and hold rioters responsible, she also questions whether U.S. taxpayer dollars are being spent wisely, wondering if the FBI is exceeding their investigative authority.

O’Hanlan told me she grew angrier in the week following the interview. She said in her post that she was disturbed by the agents having asked where her party had stopped to buy coffee on their way to the Capitol, knowing that the FBI could access her financial and credit card records at will. She suggested that, instead of conducting a legitimate investigation, the FBI might be harassing people– presumably people like herself–that did not vote for Biden.

In her Facebook post, she cast doubt that the truth about January 6 would ever be known, and said that “this ‘investigation’ is political in nature.”

O’Hanlan elaborated on the demeanor of the agents when I spoke to her for this article:

“They honestly looked bored,” O’Hanlan said of the FBI agents. “Like, I think they already have the answers, but I think they’re just doing as their superiors tell them to do and filling their days with these interviews and driving around. It’s a weird dynamic.”

Stating in her post that “most Media lies, and I still can’t find legitimate news articles on that day” and also that “the public has zero access to the comprehensive truth about what went on in the Capitol, etc., and in the government as a whole,” O’Hanlan said she asked the agents whether their investigation would provide Americans an honest account of what happened that day. She said the agents were “unable to answer,” but later told me that they commiserated with her, saying they weren’t fond of the media, either.

The FBI agents “wouldn’t say” when she asked whether they or other federal agencies were also investigating Black Lives Matter and Antifa “riots,” the “constant harassment of people near the square and city damage in [Washington] D.C. from months of nonsense.”

O’Hanlan was discouraged that the Domestic Terrorism Investigators from the FBI in her home on March 17 weren’t investigating Antifa.

But, she remembered, the agents assured her that “someone is.”

“I understand due diligence for an open crime investigation, but really? Are our tax dollars being allocated efficiently? Hell no.”

Later, in our interview, she added:

“It’s frustrating to me as a citizen—you’re supposed to protect me, […] clearly I’m not an extremist.”

The Facebook post was accompanied by a collection of 52 digital photographs and videos, selected, O’Hanlan claimed, to portray some of the funny costumes and a few perspectives of the people who showed up that day. All the images depict scenes from the rally and from the exterior of the Capitol. O’Hanlan says that other photos and posts about that day were deleted, presumably by Facebook.

The FBI did not accept any of her photographs and videos and have not followed up with her since the initial interview.

O’Hanlan described to me a festive atmosphere outside the Capitol on Jan. 6, where law enforcement officers were standing down, engaging amicably with protestors standing on patrol cars, and barriers were down. She says that while there was tear gas and some commotion, she was not aware of any of the “shenanigans” or violent, criminal activity inside the Capitol that was reported later around the day’s events.

According to O’Hanlan’s post, the interview was prompted after she had been “‘reported’ to the FBI by one or more [Facebook] contacts who accused me of crimes without proof” out of “allegiance to the Left,” motivated by “political discrimination,” and their own “hatred.” The FBI agents did not verify that presumption.

Despite her doubts about the integrity of the investigation, O’Hanlan expressed hope that it would bring justice to the grieving families of victims and that “we find out what really happened.”

Interviewed by this reporter, O’Hanlan said she believes Antifa was present at the rally and at the storming of the Capitol, based on her own previous altercations, interactions, and observations with Antifa during other protests leading up to Jan. 6.

“They are extremely well organized […] an organized militia that has been living in D.C., ready to harass and hurt people and cause damage and set things on fire. […] I do believe that Antifa was at this rally. I so believe that they were dressed in patriotic clothes.  […] I did tell the FBI I saw a lot of suspicious small groups […] I told them […] I did see a previous protestor from a different prayer rally, one day. I recognized a girl. I recognized her because she was very distinct. […] She was trying to get reactions out of people and get it on film. […] I don’t know if she was Antifa or just crazy. […] I did notice groups of guys, that they were only keeping to themselves, and they just looked really weird. They weren’t interacting with anyone else, they weren’t cheering or responding to music or anything. […] And so that made me suspicious. And I was like, maybe they’re a security group or they’re Antifa. But I was watching, because we were warned several times by people, just like, ‘Antifa will be here. Keep your eyes out. Watch your purse. Don’t just assume that everyone is a patriot. Really be careful [about] who you’re standing next to,’ and all about smoke and mirrors. So, I do believe that Antifa was there, but I cannot tell you– you know, because they cover their faces. So, they could be wearing a MAGA hat and they still have a full-on black face mask. […] There are completely covered faces in the crowd, which is — if you’re a Trump supporter at a rally, you’re not wearing a facemark. […] I did see some younger people in fully — I mean, their faces were fully covered. And I was, like, ‘Why?'”

While O’Hanlan was anxious to reunite with old friends at the rally–friends from Colorado and elsewhere–she says she was unable to organize meetings since cell reception for both incoming and outgoing calls was unavailable, a situation she had previously never encountered in that area. Friends later corroborated O’Hanlan’s suspicions that someone was “deliberately trying to confuse communications between attendees.”

O’Hanlon summarized for me the impact of the anomalies she had observed at the rally on Jan. 6:

Regarding the focus and purpose of the rally at the Washington monument on Jan. 6, O’Hanlan offered this perspective to me in our interview:

“I do not accept the Biden presidency as legitimate. I still feel like there are so many open investigations for the elections happening in states at the small and wide level. I feel like the America we knew and loved evaporated. I do not trust the election system as a whole. And that is very discouraging because without election integrity we have no foundation, no boundaries. You know, we’re not a representative republic anymore. We are controlled by–you know, it just sounds weird to say it, but I’m at a place where I can barely watch Biden. I can barely tune in. […] But it just seems like I’m still watching a fake presidency and a fake D.C. theme. […] And it’s not like I’m in denial about Trump or all of that stuff. I just feel like there is still not the resolution we were hoping for.”

O’Hanlan told me she has thought about what could have been if she’d been elected to U. S. Rep. Doug Lamborn’s (R-CO) seat in 2016:

“Oh, I’ve thought about it! Yes, I would have been an outspoken advocate for Trump and ongoing investigations. And I would have really lobbied for Vice President Pence to take a more active role. I would have been involved in Supreme Court transitions heavily. I would have been in the media, trying to rally other Republicans to call for investigations into every state and every county, if there is any questions about election integrity. It is, I believe, up to the federal government to pursue accountability and […] an audit to make sure that every Secretary of State office is running above board. I don’t think the Secretary of State’s office should be partisan. I think that you should have to be a registered independent in order to be involved in elections. You know, it’s just a means of accountability and transparency.”

O’Hanlan is a native of Colorado Springs, but currently resides about an hour outside of Washington, D.C. Besides running for Congress in Colorado, O’Hanlan also ran for a seat on the El Paso County Commission in 2018.