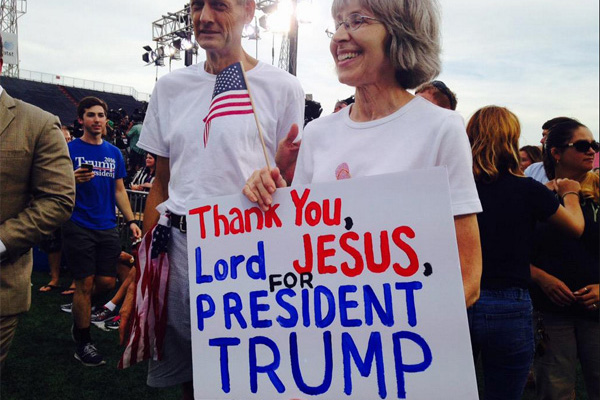 Anyone who has tracked Trump’s tabloid transgressions since the 1980s can be justified in wondering how on earth self-professed Christians could support his figurehead status, given his well-documented ethical and moral lapses preceding and following his inauguration.

On Tuesday, political flack and Christian pastor Lydia Blaha appeared on Richard Randall’s conservative talk radio program in Colorado Springs (KVOR, 740 am), to rally evangelicals’ participation in the November 6 midterm elections, and to lobby them to engage their pastors in turning out their congregants’ votes, with “Christian values” guiding their electoral decisions.

Blaha is currently associated with Save our State-Colorado, an organization targeting “Millennial and Independent voters, using unique, edgy and humorous messaging to expose the dangerous agenda of Jared Polis.”

On the radio, Blaha made the Trump presidency a central point in her pitch to evangelicals.

Her arguments justifying Trump’s evangelical support did not include his obvious pandering, his [mis]quoting and waving of the Bible from the podium, his professions of favoring the Bible over his own The Art of the Deal, nor calling out Ted Cruz on his religious hypocrisy during campaign rallies and public appearances over the past three-and-a-half years.

According to Blaha, Trump has apologized for past mistakes, and it’s time to move on. He is not the same man who campaigned throughout 2015-16.

“I don’t want to hold anybody to who they were ten [or] fifteen years ago,” she said.

Blaha believes Trump deserves the support of evangelicals because he keeps his promises, “And that’s not something that politicians do.”

Making promises which are not kept, says Blaha, “That’s not Christian.”

But Blaha also cited the President’s imperfections as a reason to support him, from a biblical rationale.

HOST RICHARD RANDALL:  It is a Promise Keeper — not to coin a term. But he has tried to keep his word to evangelicals and others.

CHRISTIAN PASTOR AND POLITCAL OPERATIVE, LYDIA BLAHA:  And I think it’s also important to look at the people of the Bible. God never used perfect people. I mean, David was an adulterer. Paul was a murderer. I mean, there are people [who] God is able to use, where they don’t even know they’re being used. And I do believe that that is the case for Donald Trump. I think that he was chosen by God to be the next President, not because he’s a perfect person, but because he could withstand the storm that nobody else could. […] He’s a beast, but I think he’s addicted to working hard. I think he’s addicted to winning. And honestly, right now, that’s what we need in America. We need a president that wants to win. And we need a president that’s going to do whatever it takes to have America be on top. And we didn’t have that with Obama. But we have that with Donald Trump. […] You know, the more you attack him, the more he just — he puffs up his feathers and he’s like, “Okay, I[‘ve] got this. I’m going after the next battle!” And it doesn’t intimidate him and it doesn’t scare him. And that is why I am a believer that God put him there for a reason, because I do not know anybody else that could do what he does, every single day.

Later in the program, a caller identified as “Dan” backed up Blaha’s view:

CALLER DAN: [00:03:34] Yeah, I just wanted to call in and mention to everybody that, you know, we’re all sinners. Nobody’s perfect. And Donald Trump might have a checkered past. But you know, Jesus Christ isn’t going to come down here and run for public office in the state of Colorado or in the country. He has no interest in that. What he has an interest in is [that] his people are going to obey him, and try and do the absolute right thing. And I just want to let everybody know — remind everybody — that, you know, we [have] got to get past Donald Trump’s past. It’s In the past. And he’s never going to be perfect. And neither is anybody else.

The website for Save our State-Colorado features multiple parody videos from a series spotlighting the work of Blaha’s sister, Rachel Keanan, under the moniker “Conservative Momma.”

Lydia Blaha worked on her father Robert Blaha’s 2016 primary campaign for U.S. Senator from Colorado, who notably announced his distaste for being compared to Donald Trump. (In her radio appearance, Lydia Blaha references her father’s combativeness as similar to Donald Trump’s)

Robert Blaha became the Chairman for the Colorado Trump campaign, a position in which he was aided by his daughter, Lydia.

Listen to an audio clip of Lydia Blaha from the Richard Randall Show here: