Colorado has dug itself into a hole, budget-wise, and it’s time to stop digging, say progressive fiscal analysts 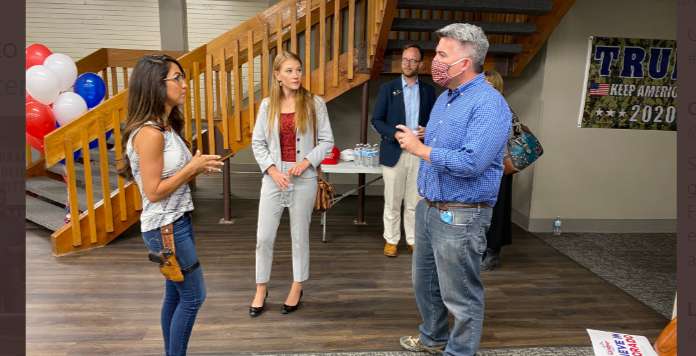 One funny side effect of congressional candidate Lauren Boebert’s rise to fame is that she makes other Republican Party candidates in Colorado look awful–at least in the eyes of conservative hardliners who must vote nonstop if Cory Gardner has a prayer to win in November.

Don’t take it from me. Hear it from the king of the bottom-feeding right-wingers himself: KNUS radio host Peter Boyles.

“This young woman brings the most excitement to the Republican party in the state of Colorado since I don’t know when,” said Boyles on air Monday.

But instead of turning this into a plus for the Republicans, Boyles contrasts Boebert with “so-called candidates” like…Cory Gardner!

“We’ve been through Bob Beauprez and Bruce Benson and the Coors brothers and, I mean, [Walker] Stapleton and this–Cory Gardner,” said Boyles. “You have infused more excitement, more speed, into the Republican party than any of those other so-called candidates.”

In other words, life would be great if only Gardner vanished, poof, and Colorado had Boebert all day every day, on every harvestable mail-in ballot in the state.

Boyles explained that no other worthless top Republican was in Denver last year, as Boebert was, carrying her gun and telling Beto O’Rourke “hell no” she wouldn’t give up her gun if his dangerous idea of a mandatory buyback of all assault weapons became law.

“I didn’t see Cory Gardner standing there, or Mike Coffman, or Walker Stapleton, or any of the above–the establishment,” Boyles yelped.

“And you’re not a big woman–I’ll say tiny woman, but I don’t mean to offend anyone,” said Boyles, who says he’s “in love with” Boebert. “You’re not very tall.”

You may find that offensive but the Republicans who must go to the polls and vote for Gardner mostly don’t. It’s refreshing to them, harmless, and its message is clear.

Gardner, in Boyles own words, is a “weenie,” a weak, word-sloshing piece of political scrap, destined of course for a high-paying lobbying job with a reciprocal smile and a pat on the back, thank you very much.

But Boebert. OMG. She’s carrying a gun and not wearing a mask. She’s unafraid to cavort with militia groups. She’s “raising [her] boys to be men.” She let a teen server walk around with a firearm in her restaurant, even though it’s against the law. With no evidence, she says Black Lives Matter protesters are “paid and bussed in.” She won’t close her restaurant, despite government health orders. She’s a right-wing media star. She’ll say no to abortion, Obamacare, you name it.

This would all normally be harmless to Gardner and other Republicans, but Gardner has struggled for years to keep the GOP base from jumping off his ship, despite his 90% pro-Trump voting record, and now the situation is more desperate because his ship is sinking–or sunk, depending on whom you talk to.

And Boebert is not on the statewide ballot. So she’s not going to push Tea Party-type Republicans to the polls statewide. She faces Democrat Diane Mitsch Bush to represent the sprawling southwestern Colorado district.

You might argue that Trump will motivate the Gardner-hating Boyles cohort to vote, and, in fact, Trump has an approval rating of 90% by Republicans in Colorado.

But Republicans themselves have already stopped believing Trump has a chance here–particularly because the Trump campaign itself has for good reason (math) thrown in the towel on the state, leaving it for Biden to gobble up. So the Trump enthusiasm may already be depressed.

And in any case, even if Trump drives Republicans to the polls, if you listen to Boyles, it’s easy to see why a chunk of the Republican right would vote for Trump but skip over Gardner for fear of vomiting if they fill in the line by his name. They hate him. It’s that bad. Trust me. I listen to them. Some are my friends.

To them, Boebert is the anti-Gardner. The real thing. She’s an energized reminder, for many Republicans, of why they don’t want to vote for Gardner.