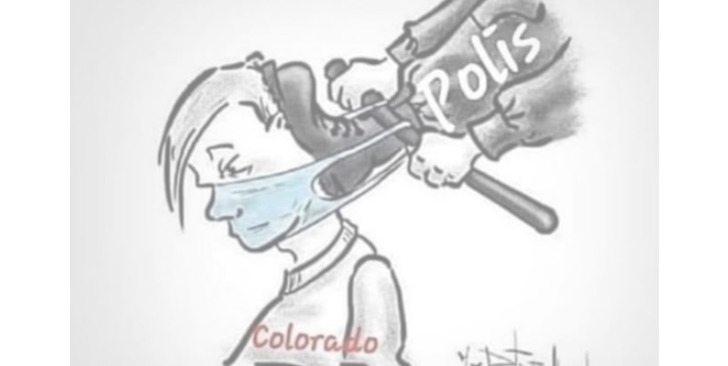 “I’m not apologizing, and I’m not retracting or deleting my post on my PERSONAL page,” Garbo wrote on Facebook after the Colorado Times Recorder contacted her about her mask post. “My common sense tells me it’s healthier to breathe fresh air. PERIOD.

“I will not be intimidated, or silenced. #iseeyou.”

Garbo claims in her post accompanying the meme that a significant number of people will develop respiratory diseases as a result of wearing masks every day, and that mask-wearing is “not about our health.”

There is no evidence that individuals with no prior chronic lung issues will develop respiratory problems after wearing face masks regularly.

According to Vanderbilt University Medical Center, “prolonged use of any face mask, including the N95 respirator, has not been shown to cause carbon dioxide toxicity or lack of adequate oxygen in healthy people.”

The Vanderbilt website points out that doctors and surgeons routinely wear masks for extended periods of time–with no adverse side effects reported.

For people with severe chronic lung issues, there is a medical exemption from the mask mandate in Colorado. However, these people–such as those with severe COPD, or require oxygen–can still be asked to leave by businesses, as they may pose a direct threat to public health, according to KOAA News5.

Experts also say that individuals with severe lung issues should take extra precautions to avoid public places as much as possible, since those individuals are at especially high risk for complications resulting from coronavirus.

People with mild breathing problems such as asthma can try wearing a loose t-shirt or bandanna covering their face if masks are too straining, says the Asthma and Allergy Foundation of America.

Garbo could also be referring to a false claim circulating social media that people can develop fungal and bacterial pneumonia from wearing face masks–a claim that the Associated Press debunked.

The Douglas County Republicans posted the same cartoon on their official Facebook page earlier this month, with added words under the cartoon saying “We Can’t Breathe,” reported the Denver Post.

Stephen Allen, Douglas County Republican Chair, removed the cartoon and publicly apologized, claiming responsibility for the content that is posted on the official social media pages.

Previously, Douglas County Republicans First Vice-Chair told the Colorado Times Recorder that “the DCGOP utilizes social media to provide a service to our followers for news and events that are of interest to friends and residents of Douglas County,” in response to an article written against mask-wearing posted on the Facebook page.

In June, Garbo, who’s seen as a rising star by state Republicans, wrote on Facebook that George Floyd’s death might have been staged.