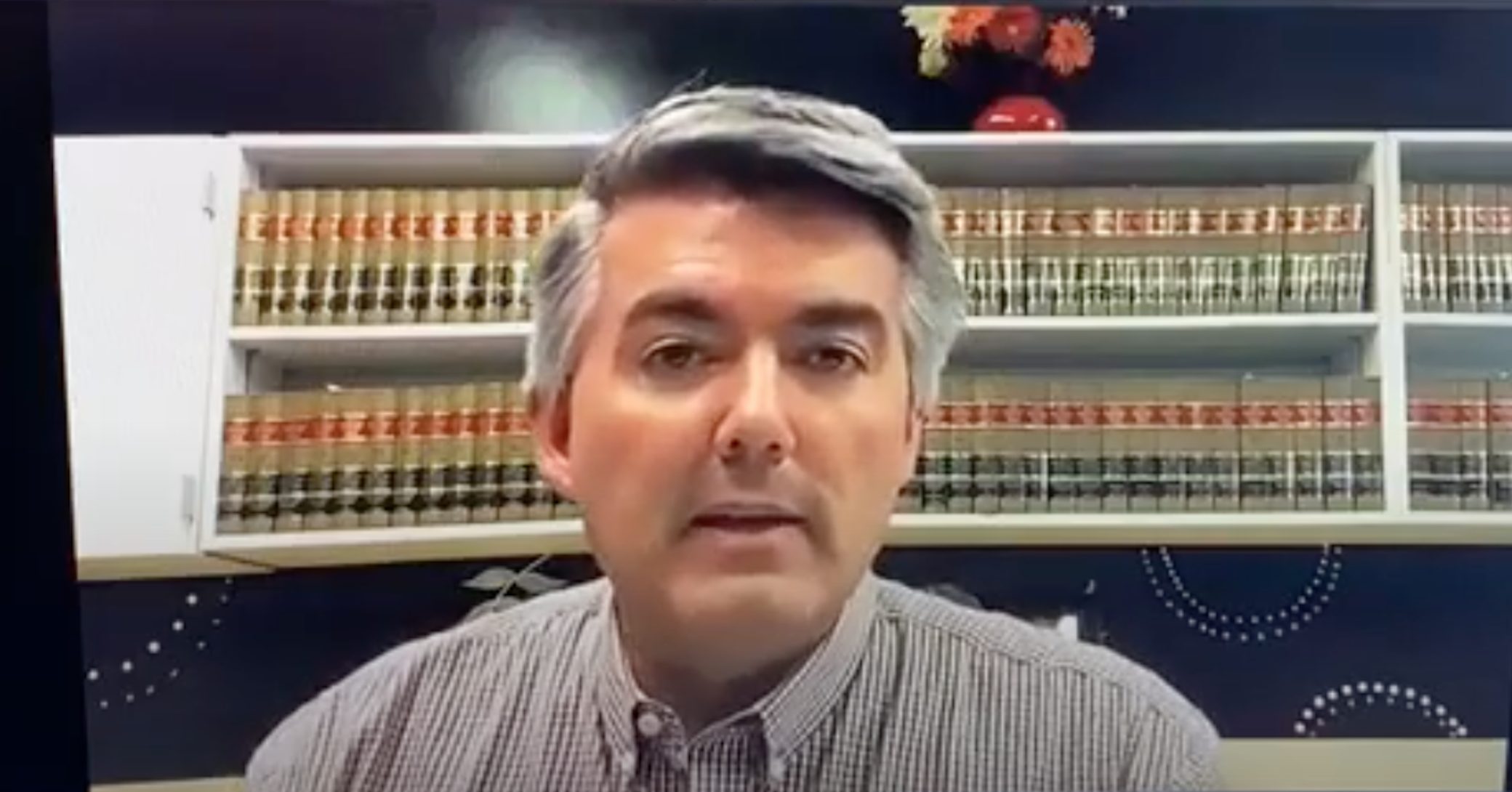 If there is a limit to Sen. Cory Gardner’s (R-CO) willingness to refrain from criticizing President Trump, it seems musing about the benefits of ingesting bleach isn’t the last straw.

Asked to evaluate the administration’s handling of the COVID-19 pandemic, Gardner refused, saying it was not important to give a grade, but to learn and improve every day, before abruptly ending the Q&A session.

On a virtual meeting with the Colorado Hispanic Chamber yesterday, KBNO News Director Fernando Sergio had a rare opportunity: he was able to ask Gardner a direct question that the senator was obliged to answer in public.

Sergio began by noting that most Americans are unhappy with the White House, citing the President’s own statement Thursday, when he proposed using sunlight and disinfectant as medicine. He then asked Gardner to “rate the administration’s response to this crisis.”

Ignoring the mention of Trump’s statement, Gardner responded by first pointing to the projections of hospitalizations and deaths that have been revised downward “as different actions were taken.” He then refused to evaluate the administration’s response so far, instead offering his opinion of what it should do going forward.

KBNO News Director Fernando Sergio: How do you rate the manner in which this administration has managed this crisis? I understand that we have never faced such a challenge in our modern history, but nevertheless the American people —I’d say more than less— are not very happy with what this White House is doing because of the information that comes out from Washington. It is very, very confusing, such as what the President stated yesterday.

In terms of your leadership and your relationship to him, to the party— in your experience as a member of Congress, how do you rate the way in which this White House has managed this crisis?

Gardner: I think if you look at the early models of what was being projected in terms of hospitalizations and the surge and the number of people that would be in ICUs and the number of expected deaths as a result, all those models changed as different actions were taken.

I think it’s important to not look and try to provide some kind of a grade. I think what’s important is that we do better and better every minute of the day. And that every action we take is better than the day before, that we learn from the day before we provide better service and better health outcomes, and that’s exactly what we have to do. We have to be guided by the health experts, we have to be guided by the science and we have to do the right thing when it comes to improving our actions all of the time.

And Mike I apologize- I’ve got a 2:30 call that I have to do with [agriculture] groups from across the state of Colorado. So I’m gonna have to jump off of the call and join that call, I apologize.

Earlier in the day, the American coronavirus death total surpassed 50,000. The most widely cited study featuring a lowered death projection was published by the University of Washington’s Institute for Health Metrics and Evaluation (IHME). The president himself repeatedly mentioned news stories covered IHME’s April 7 revision of its national death projection from 90,000 to 60,000. Yet on the same day the president made his dangerous disinfectant comments, analysis by the Washington Post explored the White House’s problematic promotion of the study’s figures, citing its “misunderstanding the math” behind the IHME’s projections.

While Gardner is unwilling to comment on the White House response to the pandemic, the President isn’t holding back from trumpeting his aid to Colorado and linking it to Gardner directly.

Today he followed up his April 8 tweet about sending Colorado 100 ventilators “at the request of Sen. Gardner,” with another, this time thanking Coloradans for letters supposedly sent to Trump “for all the Ventilators we got you.” He also included Gardner’s twitter handle.

Video of the Colorado Hispanic Chamber’s entire virtual town hall with Sen. Gardner is available on its Facebook page. The exchange between Sergio and Gardner is at the very end, starting at 1:25:30. Sergio takes over a minute to ask his question. Gardner’s answer lasted just 31 seconds.