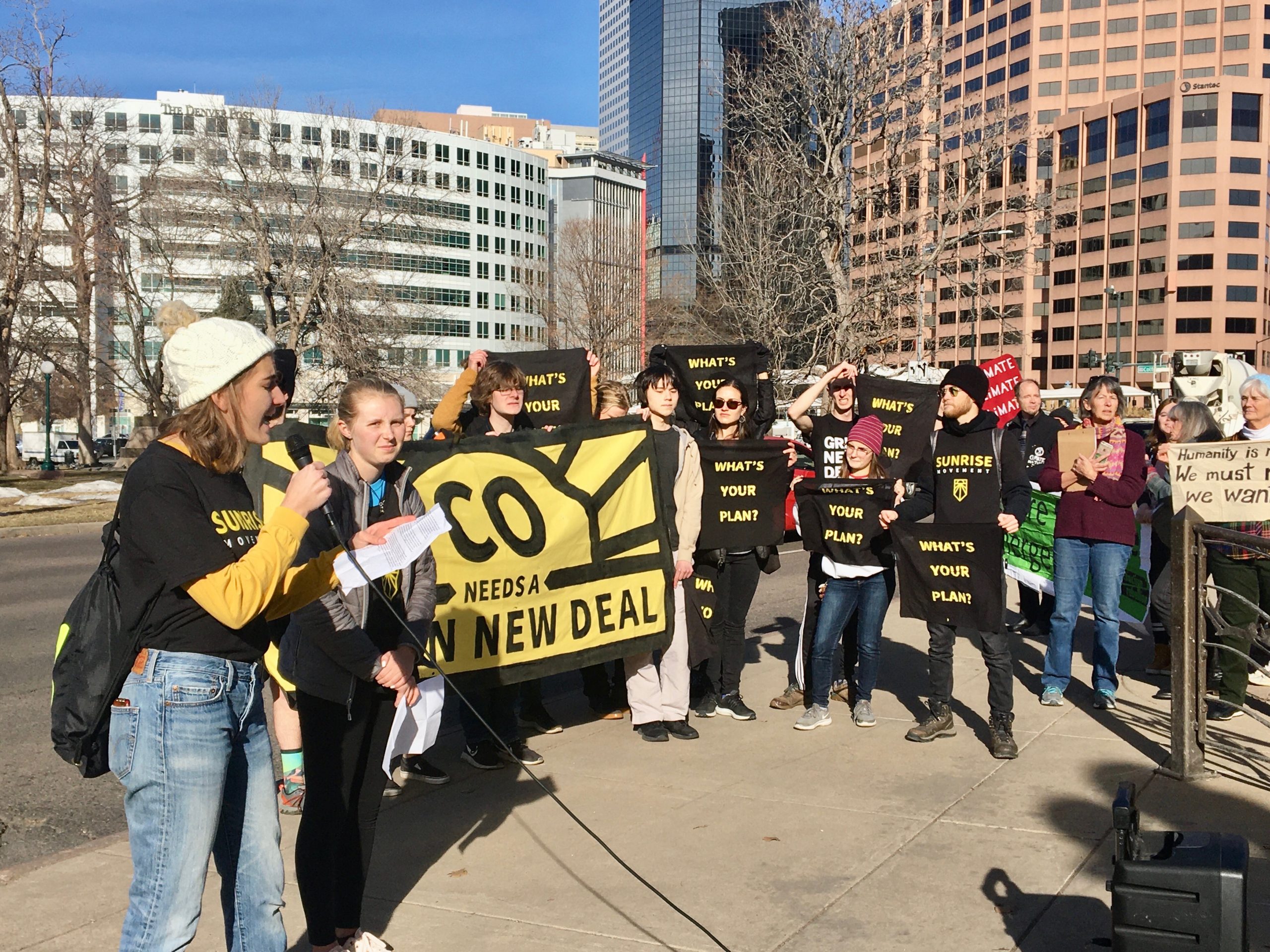 As Colorado’s Democratic Governor Jared Polis prepared to deliver his State of the State address inside the state Capitol this morning, climate activists outside rallied and made demands.

The rally drew a crowd of more than 100, many of them young people. It was organized by several environmental groups, including Extinction Rebellion, the youth-led Sunrise Movement and local Indivisible chapters.

Their demands included declaring a climate emergency and facilitating a transition to renewable energy; developing a plan to end fracking and all fossil fuel extraction in the state by 2025; and an immediate shutdown of the fracking operations at Bella Romero Academy.

Among the speakers was Patricia Nelson, the mother of a student at Bella Romero Academy in Greely, a school located just 1,200 feet away from a major fracking site. Last month, state health officials recorded a spike in emissions of benzene — a known carcinogen — that exceeded federal safety limits near the school, prompting parents and activists to ask that the site be shut down.

A study released in October shows that those living within 2,000 feet of oil and gas drilling could be exposed to short-term health risks like nose bleeds, headaches, nausea and respiratory issues.

“Our children are literally being poisoned, and no one is doing anything about it,” Nelson said.

Organizers argued the lack of action and attention stems from environmental racism, pointing out that the fracking site was originally planned to be built near Frontier Academy Elementary School, where most students are white, but was later moved to Bella Romero, where nearly 90 percent of students are non-white and qualify for free lunch.

Molina lives and sends her kids to school near the Suncor oil refinery in north Denver, which is known to release toxic pollutants in amounts that well exceed federal limits. The surrounding neighborhoods, which are home to predominantly by low-income and Latino residents, rank as one of the most polluted zip codes in the country.

“I’m going to say it how it is, it is environmental racism,” Molina said. “We are a Latino community. We have family and friends who live right there, and because they’re immigrants, they’re unable to speak out.”

On Dec. 11, two schools in Commerce City, including the one Molina’s children attend, were placed on lockout due to potential health hazards after an incident at the refinery caused yellowish particles to fall from the sky in the area.

Representatives from the youth-led Sunrise Movement spoke as well, primarily emphasizing warnings from leading climate scientists that we have around a decade to make the changes necessary to avoid the worst effects of climate change, like extreme heat and drought. They also cheered their endorsement of Democratic presidential hopeful Bernie Sanders, which the national organization announced yesterday.

Following the rally, activists entered the Capitol building to distribute flyers detailing their list of demands.

Some of the activists disrupted Polis’ address from the upper gallery of the Colorado House, shouting and holding up signs. Several were dragged out and arrested, shown here in a live stream from Extinction Rebellion Denver’s Facebook page.

“If we want to preserve our way of life for future generations, then we all need to lead on clean air and climate,” Polis said during the address. “And in fact, the states and countries that embrace the renewable energy future will reap the economic rewards.”

Polis’ address can be read in full here.

Last summer the Governor’s office released a “Roadmap to 100% Renewable Energy by 2040.” According to a report from the Center for American Progress, that deadline is more ambitious than any other state’s, though the District of Columbia is aiming for 2032. Several Colorado cities have committed to full conversion from fossil fuels even earlier than the Polis plan; Pueblo’s goal is 2035.

UPDATE: At least 25 climate protestors were protested, according to the Denver Post.