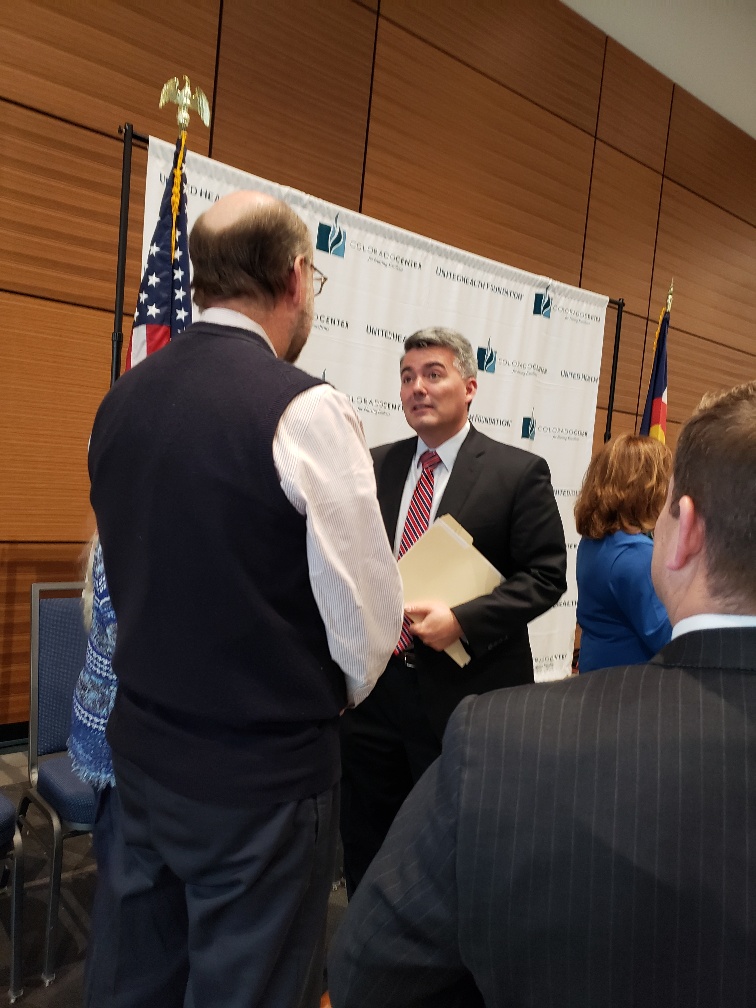 Colorado Republican Senator Cory Gardner seems to be in a bind.

National and state polls show that large majorities of the public want something to be done about high prices for prescription drugs.

But drug companies are opposing the ideas being thrown around by President Trump and Congress, from importing cheaper Canadian drugs to limiting how much drug companies can raise prices for seniors on Medicare.

As he faces a tough re-election battle, Gardner, who’s one of the nation’s top recipients of money from the powerful drug industry group, the Pharmaceutical Research and Manufacturers of America (PhRMA), isn’t saying if he’ll buck drug companies and support the ideas. He’s not criticizing them either. He isn’t saying what he thinks about the proposals.

In contrast, the state’s other senator, Democrat Michael Bennet, has backed a bipartisan plan to shield Medicare recipients from big increases in drug prices.

Bennet also backs the idea of allowing the government to negotiate lower prices with companies that provide drugs covered by Medicare, and he blasted Senate Majority Leader Mitch McConnell (R-KY) for not allowing the Senate to vote on House Speaker Nancy Pelosi’s plan to allow the negotiations.

“Whether it is reining in prescription drug costs, gun violence reform measures, or protecting our elections, Mitch McConnell’s obstruction and political games are hurting progress and the American people,” Bennet said in a statement to Colorado Times Recorder Wednesday.

Gardner’s silence on the proposals, meanwhile, is opening him up for attacks from Democrats at a time when he finds himself in the middle of another controversy with implications for people having access to medication.

Americans for Prosperity, a Koch Network, is running a reportedly six-figure ad campaign for four senators, including Gardner, for voting against a Democratic Senate resolution to block a Trump administration move allowing states to sell so-called “junk plans.”

Proponents of the cheap plans say they give consumers more choices, and the Americans for Prosperity ad praises Gardner for “protecting our right to make our own decisions.”

In a statement to the Colorado Times Recorder, the conservative group confirmed the ad refers to the insurance vote as well as Gardner’s support for allowing terminally-ill patients to try experimental drugs that haven’t been approved by the FDA.

However, critics say the “junk plans” do not, among other things, protect people with pre-existing conditions.

“Senator Gardner just voted to defend junk insurance that can refuse to cover prescription drugs,” said the Colorado Democratic Party said in a statement. In addition, by being silent on the proposals, he is “preferring to side with his Big Pharma backers over doing what’s right for Coloradans who are struggling with rising prices.”

Gardner is one of the top recipients of donations from PhRMA and individuals employed by the group, according to the campaign finance watchdog group, the Center for Responsive Politics.

According to a database kept by the non-partisan Kaiser Health News, Gardner is also one of the top recipients of donations from Amgen and other individual drug companies.

Sixty-eight percent of Colorado voters, and eighty-one percent of seniors, believe controlling rising drug prices is important, according to a poll last month by Morning Consult, commissioned by The Campaign for Sustainable Rx Pricing. Nationally, a poll in September by the Kaiser Family Foundation, a healthcare think tank, found that 70 percent of the public said lowering drug prices should be a “top priority.”

Gardner has backed a couple of drug proposals, including cracking down on the ability of drug companies to delay competitors from selling cheaper alternatives, and creating a national database of drug prices so customers can shop around.

However, even other Republicans and Trump, and the public, would go further despite the opposition from drug companies.

According to the Morning Consult poll,  72% of adults, including 68% of Republicans, back the proposal. Trump, as well, has signaled support for the bill, even though drug companies say it would cost them money.

PhRMAsaid in a statement in July, “It would siphon more than $150 billion from researching and developing new medicines and give those savings to the government, insurers and PBMs, instead of using those savings to lower costs for seniors at the pharmacy counter.”

The bill passed the Senate’s finance committee in July but hasn’t been brought up by Senate Majority Leader McConnell for a vote.

Gardner’s office didn’t respond to an inquiry from the Colorado Times Recorder last week on whether he supports the idea, and ignored inquiries from The Hill on his position.

Bennet backed the proposal in July. “With this legislation, the Senate is finally acting to rein in drug prices, hold drug manufacturers accountable, and give seniors peace of mind,” he said in a statement.

Gardner is also silent on another idea backed by Trump, but opposed by drug companies, to allow for the importation of cheaper Canadian drugs.

Trump tweeted Nov. 22 that he’ll “soon release a plan to let Florida and other States import prescription drugs that are MUCH CHEAPER than what we have now! Hard-working Americans don’t deserve to pay such high prices for the drugs they need.”

The idea also has support in Colorado. The state earlier this year approved a plan seeking federal approval to make cheaper drugs from Canada available to people in the state. Trump reportedly talked favorably to Colorado Gov. Jared Polis, a Democrat, about the idea.

Gardner’s office did not respond when asked where the senator stands.

Former Gov. John Hickenlooper, one of the Democrats vying to take on Gardner next year, said via his campaign that he “believes we need to allow importation of safe and reliable prescription drugs from other countries to expand the supply of affordable, life-saving medication.”

Gardner, as well as Bennet, voted in 2017 against a largely symbolic amendment proposed by senators by Bernie Sanders (I-VT) and Amy Klobuchar (D-MN) to allow imports of Canadian drugs. Bennet’s office didn’t immediately say where he stands on the issue now that the state has backed the idea. A Bennet spokeswoman said the senator believes “we should focus on negotiating lower drug prices as a first step” before importing Canadian drugs.

Another idea with popular support is allowing the government to negotiate down drug prices charged for Medicare, Part D, the 2003 law that established an optional prescription drug benefit for seniors but barred the government from setting or negotiating the prices.

A Kaiser Family Foundation survey found broad support for changing that. The idea is supported by 88% of the public, including 90% of independents and 85% of Republicans.

The idea is the centerpiece of Democratic House Speaker Pelosi’s drug pricing bill. However, Republican Senate Majority Leader McConnell has said he would not allow a vote in the Senate if the House were to pass it.

Trump had supported the proposal during the campaign, but according to The Hill he has backtracked after meeting with the drug industry, which opposes the idea, and lambasted the proposal in a tweet Nov. 19.

Gardner’s office wouldn’t say what he thinks of the idea.

Kery Murakami is a journalist-based in Washington, D.C. who has covered Congress and issues from health care to tech policy. He also covered state government in Washington state for The Seattle Times, City Hall in Seattle, and until recently the nation's second-largest transit system for a publication of The Washington Post.