With all the stories about “fake news” in the election, you would think someone like Casper Stockham (R-Colorado), Dianna Degette’s (D-Colorado) opponent in the recent Colorado CD1 election, would be reluctant to post fake news on his Facebook page.

Unfortunately, Jason Salzman’s expose on elected officials’ fake news posts and his request that officials sign a “fake news pledge” seems like it might be an unheeded cry in the wilderness as far as Republicans are concerned.

Even more concerning is when they post things that they know are not true.  In this example, Stockham posts a meme going around that Target is putting signs on aisles with Muslim cashiers asking customers to choose another line if they’re purchasing pork or alcohol.

Even without checking Snopes this one doesn’t pass the laugh test, but that didn’t stop Casper. 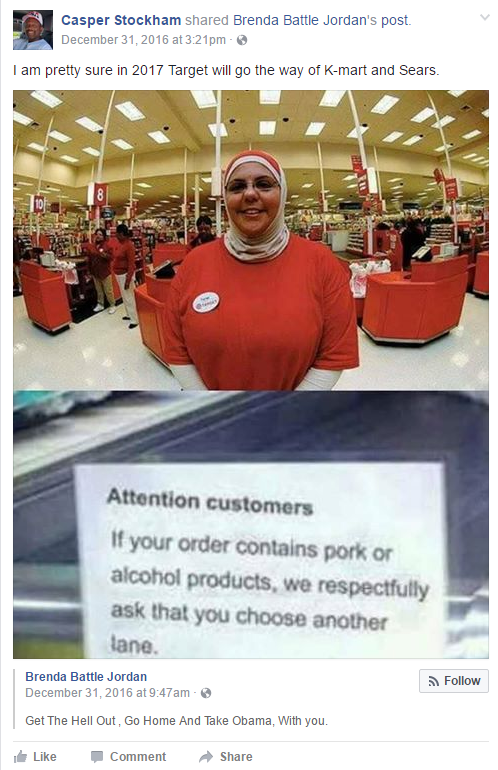 Then, below the post, Casper tells his readers that the story is “probably not true”.

This begs the question: What is gained by posting something that is not true? Casper tries to answer:

Consider the dissonance in Casper’s response. Muslims should not be judged by other Muslim’s actions and Casper’s way of showing this is to post a Muslim bashing meme that he knows is not true?

If creeping Sharia law is truly a problem in America, why the need to create straw-man examples? Why would someone who regularly posts Bible verses on Facebook knowingly choose to ignore the commandment to not bear false witness?

Take the Fake News Pledge, Casper! Stop lying about people! Or would that dry up all your false grievances and render you mute?