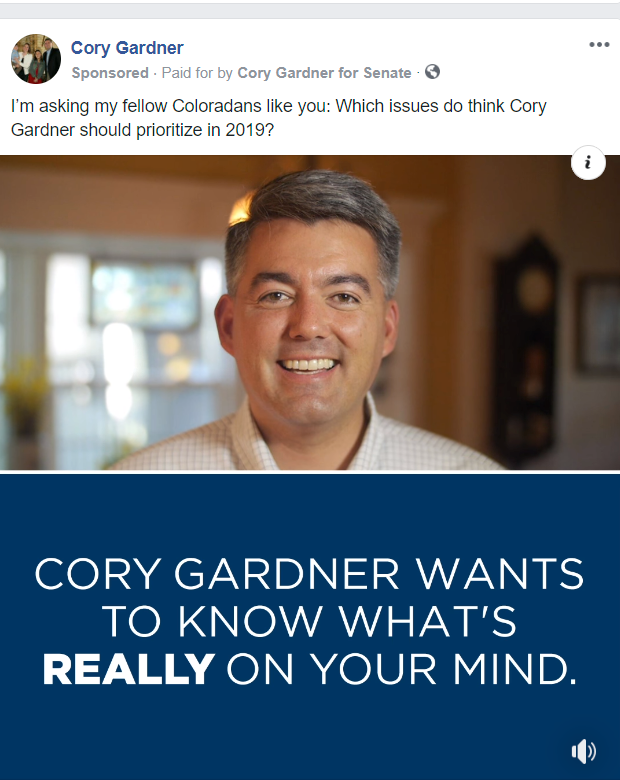 In an ironic twist, given that he hasn’t had a public town hall meeting in well over a year, Colorado Sen. Cory Gardner has launched a campaign advertisement that tells you, “CORY GARDNER WANTS TO KNOW WHAT’S REALLY ON YOUR MIND.”

Another Gardner ad asks, “Do you want to protect the Senate from a radical far-Left [sic] takeover in 2020?”

The advertisements are among a Facebook series of six ads, sponsored by Cory Gardner for Senate, that appear to be his first ads for his 2020 re-election campaign.

In a message atop one “What’s Really on Your Mind” ad, Gardner states, “I’m asking my fellow Coloradans like you: Which issues do think [sic] Cory Gardner should prioritize in 2019?”

The ad flashes a photo of a smiling Gardner and then states, “SHARE YOUR 2019 PRIORITIES,” which is followed by icons representing six issues: “Agriculture, healthcare, energy and environment, Second Amendment, education, taxes and spending, transportation and infrastructure.”

If you click through to the survey, on VictoryAction.com, you’re told to, “Choose your response,” and then you must pick one of the same six issues featured in the ad itself.

You can’t choose two priorities, but you can write in your own issue, like, perhaps, abortion or Trump, neither of which was a standard option.

Another ad states, “Attention Coloradans: Do you want to protect the Senate from a radical far-Left [sic] takeover in 2020? Share your thoughts now.”

This message sits atop an image of the U.S. Capitol, with the statement, “34 SEATS UP FOR GRABS IN 2020.” Then, “22 ARE HELD BY REPUBLICANS. THAT’S WHY WE NEED TO HEAR FROM COLORADANS LIKE YOU. ARE YOU VOTING TO PROTECT THE REPUBLICAN MAJORITY IN 2020? TAKE THE 2020 POLL.”

A similar ad starts with, “Calling all Colorado conservatives: What matters most to you? Cutting Taxes? Education? Energy and the environment?”

Political analysts say this type of digital advertising is used by political campaigns to build lists of voters and then target them later with further ads and communications.

The “Cory Gardner for U.S. Senate” Facebook page that’s sponsoring these ads features a set of ads from Gardner’s 2015 race against then Sen. Mark Udall.

Gardner launched ads at the time saying that when his party was wrong, he’d say so. Since being elected, he’s voted with Trump over 90 percent of the time, including three key voted to kill Obamacare.