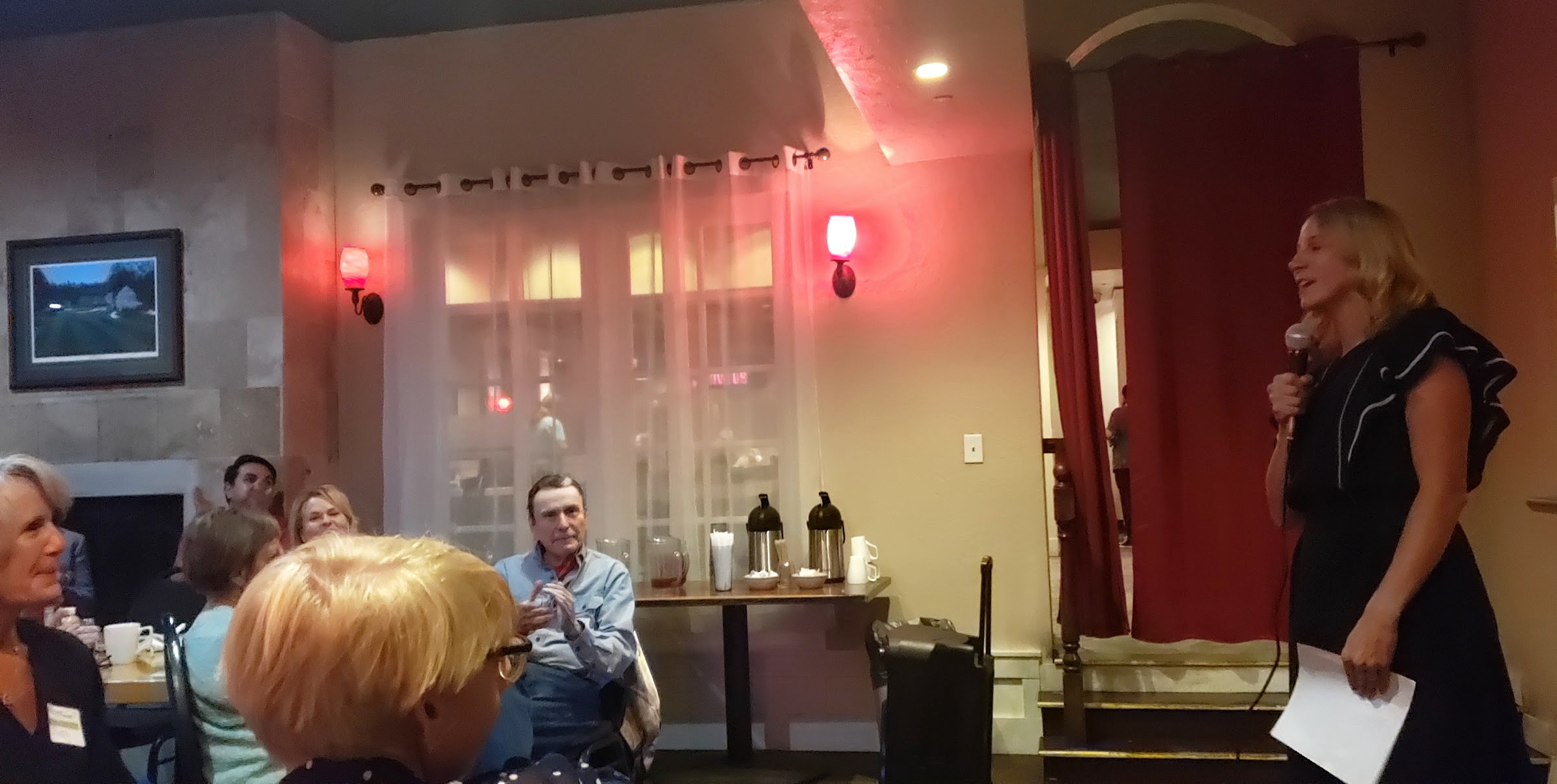 Standing before a room of voters who had come to hear Republican candidates talk about education, Lynn Emrick made her pitch: “I decided to step up and run for this seat because I feel like our education system is in a real crisis. … My only agenda will be your child’s success.”

It was a short but passionate plea about restoring parental control over the educational process. Emrick called out her opponent, incumbent state Rep. Brianna Titone (D-Arvada), and unnamed other “current leaders” for their support of a trio of policies she opposes. Her list included the federal Equal Access Act, passed in 1984 to allow student-run religious clubs in public schools if other non-curricular clubs are allowed, and two state laws: last year’s Protecting Preventive Health Care Coverage Act and 2019’s Youth Mental Health Education & Suicide Prevention Act.

“I support funding the student which will allow every parent to educate their child as they see fit, and that money will follow the student and fund their education and not the bureaucracy,” said Emrick. “When attendance is down 22,000 students, but yet spending is up 10%, where is that money going? When our teachers have larger classrooms and less resources, it’s our children who are the ones suffering and admin’s pockets are being filled. I also want to bring the Parents’ Bill of Rights back into the conversation. Our education system needs a major shakeup through competition.”

For someone making the case that she’s the best candidate to champion school choice and parental rights in education, Emrick never mentioned what would seem to be her strongest argument — she’s already done it in her own community.

In a March 2021 Facebook post that has since been deleted, Emrick describes Acts Academy thusly, “Our goal is to grow and nurture disciples, students of character and children that really know Jesus! We want to offer an affordable private education for families that might not of have had an option before, but now it can be!”

In another since-deleted Facebook post, Emrick says it was founded by “six ambitious, determined, God-fearing moms together who want education to truly make a difference not only in our own babies’ lives, but try and leave a legacy for future generations.”

In a post from September of last year, Emrick announced that her school was looking to hire a teacher, calling it a “Great opportunity for someone who is creative and has experience working with kids in a classroom setting. License not required…We do require that you have a personal relationship with Jesus in order to align with our statement of faith.”

To be clear, all of this is perfectly legal. The state doesn’t require private schools to have licensed teachers or acquire accreditation from any agency. To open its doors and enroll students, Acts Academy only needed a business license from the Secretary of State, which it acquired on March 22, 2021.

Except that this Wheat Ridge elementary school is now operating decidedly under the radar.

It dissolved its license on Sept. 1 of this year, the same day the Colorado Times Recorder reported on the school’s existence. Its website, which previously promoted its Biblically-based mission and vision and invited interested parents to contact it for more information, was replaced with a single password-protected login page that offers no details about the institution.

Nevertheless, Emrick tells the Colorado Times Recorder that the school is larger than ever.

“We started a couple years ago,” says Emrick. “A group of parents got together; we just needed a different way to educate our children. We have about 160 students.”

Reached for comment, Titone said, “Any evidence of intent to evade transparency obligations is concerning when someone wants to serve in a public capacity. When it comes to the Christian school, we are a diverse state, and any representative needs to be able to understand and represent people from a variety of faith traditions – not just their own – that’s what the First Amendment is about.”

In January of this year, prior to the website’s removal, the homepage featured the following statement: “As a Private Membership Association, Acts Academy is open to members only.”

Asked why the website was pulled down (which also took place immediately following our previous story), and what the new designation meant, Emrick said that now that she’s a candidate and out in public she didn’t want to talk about the school because her own kids attend it.

Private membership associations (PMA) are the latest craze in the Sovereign Citizens movement. Followers of this longstanding anti-government conspiracy believe they are exempt from laws they don’t like and cite a jumble of various treaties, myths, and conspiracy theories about the United States being a corporation or operating under admiralty law — the international law of sea — to claim that any number of laws don’t apply to them. Although PMAs are not recognized as legitimate legal entities, proponents believe that business owners operating under the umbrella of a PMA are exempt from having to follow local, state and federal regulations.

The rationale behind PMAs goes something like this: Because a PMA is established based on a contract between individuals, that contract supposedly supersedes any laws that might otherwise apply. There are noteworthy examples of people in poorly-regulated industries like midwifery, organic farming, and private education using PMAs to attempt to shield themselves from legal harm and claim that the law didn’t apply to them. So far, though, their arguments haven’t held up in court.

Extremism expert JJ McNab explained the faulty PMA concept to the Daily Beast for a 2019 story about unlicensed midwives who claimed their PMA exempted them from medical regulations.

“It’s all phony legal theory. There’s nothing real there. If you look at the history of the sovereign and tax-protest movements, this is just a rehashing of an earlier scheme called the ‘pure trust.’ They just repackaged it,” said MacNab, a fellow at George Washington University’s Program on Extremism. It comes up over and over again. Sometimes it’s repackaged as ‘common-law trust.’ Right now they’re calling it ‘PMAs.’”

Acts Academy isn’t the only school to claim it is a PMA. Novae Terrae Alliance, a “learning center” created by California parents, attempted to circumvent statewide COVID mask and vaccine mandates by operating as a PMA. However, Novae Terrae could not legally be a school without requiring masks or vaccines, because even private schools in the state were subject to the mandates.

Importantly, the owners of Novae Terrae and other businesses that have been run as PMAs were attempting to skirt regulations with impunity. It’s not clear whether Acts Academy is trying to do the same — and if not, why the school’s founders would choose to structure it as a PMA in the first place.

Emrick talked with the Colorado Times Recorder at the Jefferson County Republicans’ education event on Oct. 4, which also featured education activist Lindsey Datko, founder of JeffCo Kids First. Datko has been at the center of the recent “furries in schools” controversy, which began with Colorado Times Recorder’s reporting on GOP gubernatorial candidate Heidi Ganahl’s false statement that “kids are identifying as cats…all over Colorado.” Datko has since repeatedly doubled down on that claim and asked the thousands of JeffCo Kids First members (which includes both Emrick and Ganahl) to send her anonymous videos of students in class to prove the debunked claim.

Other candidates appearing at this event included state senate hopeful Tim Walsh, who claimed parents have told him their children have trouble learning at school because of “so much disruptive behavior in the classroom,” but he didn’t mention any specific type of disruption. Walsh’s previous interest in education includes personally funding a series of religious right videos by Dinesh D’Souza that rewrite American history through a conservative Christian lens.

Following her conversation with the Times Recorder at Datko’s event, Emrick did not respond to a subsequent email asking the following questions about Acts Academy:

How is Acts operating now that it has dissolved its business license with the Secretary of State?
Prior to it being removed, the website stated that Acts is a “Private Membership Association.” What does that mean exactly?
What is the current tuition?

This article will be updated with any response received.