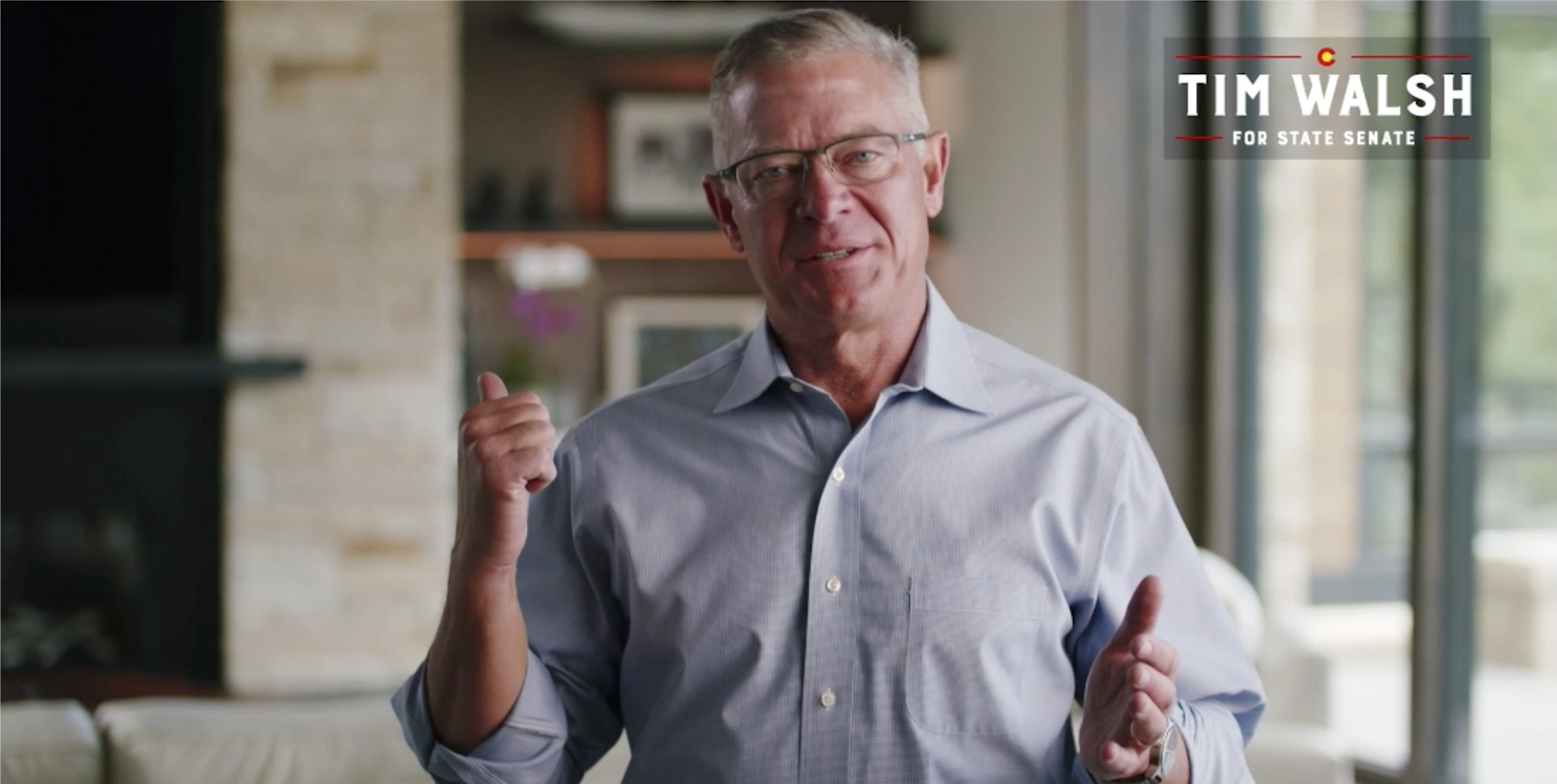 Front Range developer Tim Walsh, who is running for state senate in Jefferson County, promises to “keep politics out of the classroom,” but he’s also funding a right-wing group with the opposite goal: teaching a conservative Christian version of American history to young people.

In December 2020, Walsh and his wife Lisa launched the Tim and Lisa Walsh Family Foundation. Other than its registration filing with the Colorado Secretary of State, no public records of the 501c3 nonprofit exist, and it’s currently listed as delinquent with the SOS for failing to file periodic paperwork.

The Colorado Times Recorder was only able to find one reference to the foundation’s activity: far-right conspiracist documentarian Dinesh D’Souza thanked Walsh’s foundation for its “generous donations” in a pair of acknowledgments at the end of two of short videos he made for right-wing curriculum outlet PragerU.

D’Souza’s most recent film, “2000 Mules,” is a widely debunked conspiracy movie that alleges without evidence that thousands of “ballot mules” cast illegal ballots in the 2020 election, flipping the results from Trump to Biden.

Prior to marketing the Big Lie, however, D’Souza made a name for himself as a far-right author and documentarian. His historical takes range from the dubious – he blames America’s “cultural left” for 9-11, to the absurd: “Was slavery a racist institution? No.”

The nonprofit, which took in $56 million in grants last year, also describes itself as “fighting for freedom, truth, and Judeo-Christian values with mind-changing content for people of every age.”

D’Souza’s contributions include “Is Fascism Right or Left?” and “Are Some Cultures Better Than Others?”

He also created a five-part series on the Founding Fathers. Two episodes, covering James Madison and Alexander Hamilton, conclude with the following acknowledgment: “This video was made possible by a generous donation from the Tim and Lisa Walsh Family Foundation.”

As with all of D’Souza’s historical content, the Hamilton and Madison videos present an overly simplified “free market” account of the subject matter. The Hamilton video credits him with literally inventing capitalism.

PragerU released these videos in September of 2021, prior to the release of 2000 Mules, well after D’Souza’s numerous other election conspiracy and Jan. 6 apologist statements.

In 2015 A federal judge sentenced D’Souza to five years probation and eight months of supervised living at a community confinement center after he pled guilty to a felony campaign finance violation. President Trump later pardoned him.

It’s unclear how much money Tim and Lisa Walsh gave to PragerU for D’Souza’s videos. The Walsh Family Foundation’s nonprofit registration paperwork doesn’t list a website or phone number. A message left with the media phone number for Confluence Companies, which has the same address as the foundation, was not returned.

The Walsh for Colorado campaign did not return voicemail or email requests for comment. PragerU likewise did not return an email press inquiry. This article will be updated with any responses received.