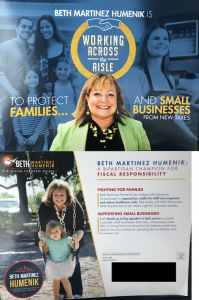 In campaign ads in advance of November’s election, State Sen. Beth Martinez Humenik of Thornton is presented as a middle-of-the-road lawmaker.

For example, one flyer mailed to Adams County voters claims Humenik “is working across the aisle” in a bipartisan fashion at the Colorado Capitol.

But judging from a set of her votes during her years at the state legislature, Humenik is not necessarily the bipartisan lawmaker she’s billed as in the ads.

On guns, for example, Humenik voted for a proposed law that would have allowed anyone over 21-years-old to carry a concealed handgun without a permit.

Under the Humenik-backed legislation, a handgun could be carried anywhere in Colorado, including theaters, malls, parks and other public spaces, but not in schools, according to the text of the legislation, which was eventually killed by Democrats.

She’s also voted to repeal a law requiring a background check prior to the transfer of a gun from one person to another. After clearing the Republican-controlled senate, the measure died in the Colorado state house.

Democrats accused Republicans, including Humenik, of opposing common-sense safety measures that could save lives.

A No Vote on Raising Teacher Salaries

Humenik, who faces Democrat Faith Winter in the swing Adams County race, has also taken stances on education issues that, analysts say, set her apart from moderates in Colorado.

This year, Humenik voted against an amendment that would have raised public school teachers’ salaries by $5,000 per year. Low salaries contribute to teacher shortages in Colorado, according to studies. But Humenik repeatedly voted to give tax credits to those who pay private school tuition.

Another measure, opposed by Humenik last year, would have required the Colorado Department of Education to develop a strategic plan to address the chronic problems of the recruitment and retention of teachers in the state.

Some of Humenik’s environmental votes also set her apart from moderates.

For example, in one closely-watched vote, Humenik backed legislation that would have rolled back rules requiring power plants to produce more electricity from renewable energy sources, like solar.

Democrats disputed GOP claims by allies of Humenik that the costs were too high–and they pointed to the environmental benefit of combating climate change.

Humenik opposed another effort to combat global warming, when she voted for a bill that blocked Colorado from implementing President Obama’s Clean Coal Initiative, after it was stalled at the federal level.

Humenik did not return a call seeking comment for this article, but her allies insist she’s a been moderate lawmaker, despite the votes spotlighted here.

The Thornton Republican’s race against Faith Winter is seen as one of Colorado’s most important election contests, perhaps determining if Democrats win control of the Colorado state senate from Republicans, who currently hold a one-seat advantage in the chamber.