by
Madeleine Schmidt
posted on
October 1, 2018

State Sen. Beth Martinez Humenik, a Republican from Thornton who’s up for reelection in one of Colorado’s most competitive Senate districts, has been touting herself as a former educator who “supports funding schools to provide our children with great teachers and the quality education that every child deserves,” according to her website.

But during her tenure as a lawmaker, Humenik voted against raising teachers’ salaries, voted to roll back retirement benefits for teachers, and voted against a measure that addressed teacher shortages.

During the 2018 legislative session, Humenik voted against an amendment to Colorado’s budget bill that would have raised public school teacher salaries by $5,000 a year.

She also voted in favor of a bill this year that overhauled the Public Employees Retirement Association (PERA), which provides retirement and other benefits to state employees, including teachers. Lawmakers were under pressure to make changes to the drastically underfunded program, and made significant cuts to teacher benefits in an eleventh-hour deal on the last day of the 2018 legislative session. Those changes included increasing the retirement age for new teachers from 58 to 64 and requiring public employees to contribute an additional two percent of their pay to the retirement system.

The vote took place just weeks after thousands of teachers rallied at Colorado’s capitol for higher pay and more funding for schools.

Low teacher pay is one of several factors that have contributed to teacher shortages in some states, including in Colorado.

In order to combat the growing crisis, lawmakers in 2017 passed a bill that required the department of education to examine the recruitment and retention of teachers and come up with a strategic plan to address shortages based on their findings. Humenik, however, voted against the measure. 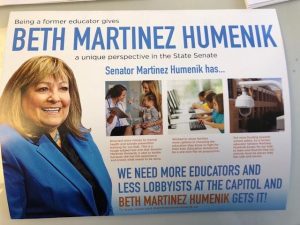 Ahead of the November election, however, the Humenik campaign appears to be trying to appeal to voters who have been energized by a gigantic national movement, led by teachers, to highlight crumbling public schools and advocate for more funding for education.

Flyers that have been sent out by the campaign and her allies say things like “good teachers are the are the foundation for great futures” and “being a former educator gives Beth Martinez Humenik a unique perspective in the State Senate.”

In addition to voting against measures that would help teachers, Humenik has also repeatedly voted to give tax credits to those who pay private school tuition.

Critics say this legislation is a form of vouchers, and that it encourages more students to go into the private school system using public tax dollars that could have gone toward improving the public school system.