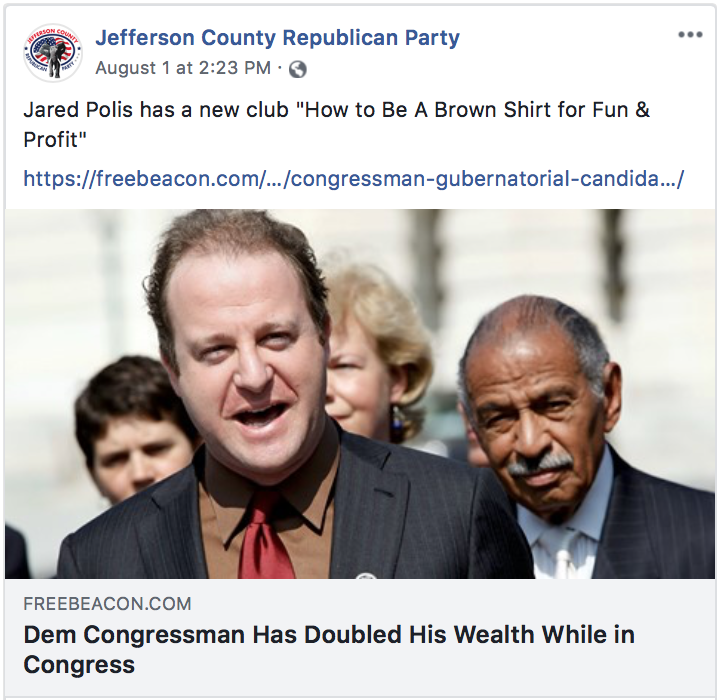 UPDATE: The Jefferson County Republican Party has deleted the post, though officials still have yet to comment.

The Jefferson County Republican Party referred to Congressman Jared Polis as a “Brown Shirt” in an August 1 Facebook post. “Brown Shirt” is a nickname for a member of the Sturmabteilung, Hitler’s Nazi militia which beat and murdered those who opposed his rise to power. Polis, who is Jewish, is Colorado’s Democratic nominee for Governor.

The post shared an article about Rep. Polis’ (D – Boulder) personal wealth and featured a picture of him wearing a suit with a brown dress shirt. Above the image the party wrote:

“Things work out for the best when we disagree with each other respectfully. The Nazis example should teach Dems like Maxine Waters one thing. Today’s button pushers can become tomorrow’s targets. The Brown Shirts (SA) harassed others until Hitler did away with them in the Night of the Long Knives. When one group is unsafe then no one is safe. We should not tolerate this sort of behavior in America.”

Webb was criticizing Rep. Waters’ urging of supporters to confront Trump administration officials they encounter in public places. It’s unclear why he refers to the murderous Brown shirts as “button-pushers,” but he clearly understands that they were Nazi soldiers. Such a comparison would seem to undermine his plea for respectful discourse, which he has made repeatedly, even specifically mentioning the Governor’s race. On June 29 Webb posted:

Votes matter. The cause to prevent Jared Polis from becoming Governor is not served by crawling into the gutter with the worst most juvenile put downs. More people will be attracted to the cause by well thought out and reasoned arguments made with only good humor. Classy is clean, common sense but most importantly effective. It is the only way this race will be won. Think about it.

Chairman Webb did not respond to an email request for comment.