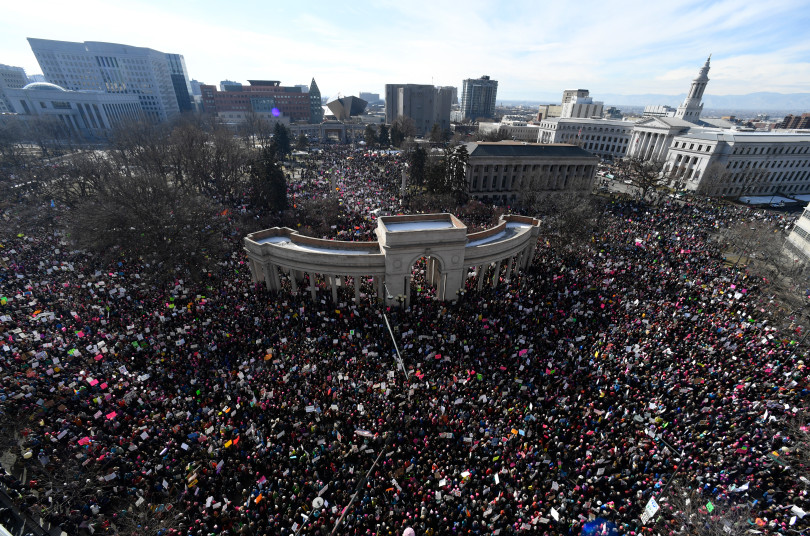 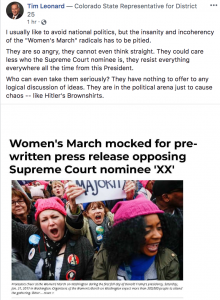 On the evening of July 10, Leonard mocked women from all across America, including many in his own district, who participated in any of the numerous “Women’s March” rallies, organized in opposition to President Trump.

He dismissed them as “insane and incoherent,” as well as “so angry they can’t even think straight.”

Labeling women as “crazy” or too emotional to be able to think clearly isn’t a new phenomenon, but the practice, known as gaslighting, has received considerably more attention in the Trump era. This tactic of rejecting women’s arguments by claiming they are incapable of rational thought that led in part to the overwhelming public response to the #MeToo movement. Comparing any Americans choosing to exercise their First Amendment right to political protest to Nazi enforcers doesn’t have a clinical definition, it’s just being awful.

Leonard’s post caught the attention of 9News’ Kyle Clark, who featured it on the July 13 edition of hey Next: “Colorado state rep. compares Women’s March participants to Nazis on Facebook.” Leonard did not respond to messages from 9News.

Leonard’s extreme views in opposition to a woman’s right to choose place him at the far-right edge of his own party. He is a former board member of Colorado Right To Life, a group with anti-choice views including so-called “personhood,” or the belief that a fertilized egg should have all of the same rights as a person who has been born. Under a personhood law, all abortion would be banned, with no exceptions for rape and incest,  and possibly some forms of birth control as well. 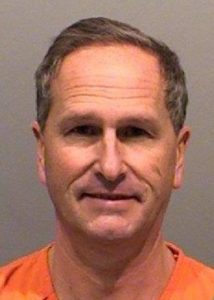 Leonard’s rigid beliefs set him apart from his colleagues in another way: in December of 2016 he became the first Colorado legislator in forty years to serve time in jail while in office. As part of an ongoing legal fight with his ex-wife over his children’s schooling, he was sentenced to two weeks behind bars at the end of 2016 by a judge who found him in contempt of court, citing Leonard’s multiple attempts to interfere with his former wife’s sole authority to make educational decisions for their four minor children.

The final straw for the magistrate was Leonard’s encore effort to opt a child out of a standardized test, despite having been held in contempt two years earlier for the very thing–trying impose his own priorities and ignoring those of the child’s mother, who had been awarded authority over those decisions by the court.

Weeks later when the 2017 legislative session commenced, Leonard introduced a bill to eliminate the same state tests he didn’t want his wife allowing their children to participate in.

I usually like to avoid national politics, but the insanity and incoherency of the “Women’s March” radicals has to be pitied.

They are so angry, they cannot even think straight. They could care less who the Supreme Court nominee is, they resist everything everywhere all the time from this President.

Who can even take them seriously? They have nothing to offer to any logical discussion of ideas. They are in the political arena just to cause chaos — like Hitler’s Brownshirts.