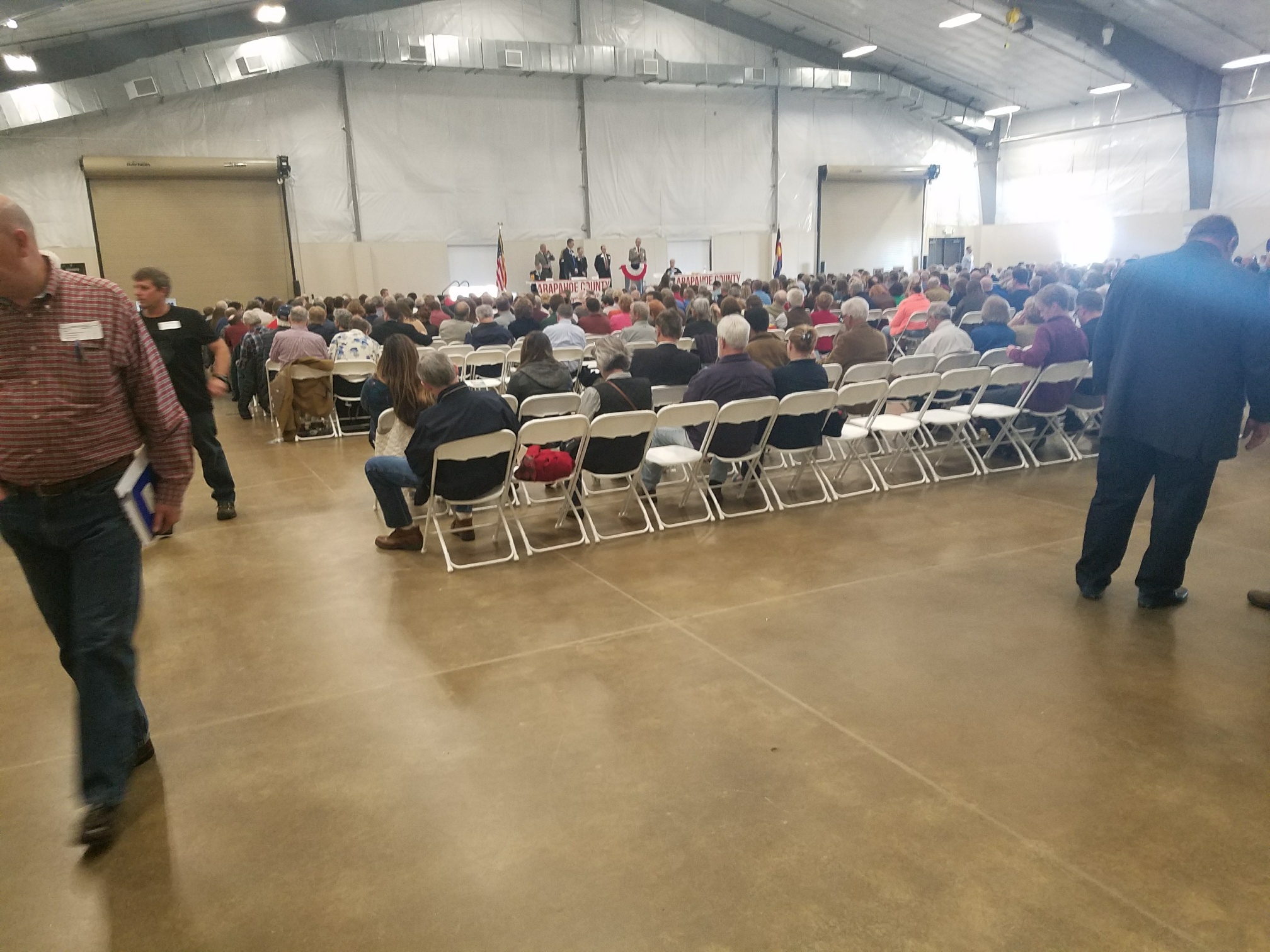 In the morning, Gardner could be seen schmoozing with delegates in the back of the assembly hall at the Arapahoe County Fairgrounds, as Republican candidates gave stump speeches to hundreds of delegates who’d been selected at precinct meetings March 6 to attend Saturday’s county gathering. Similar county assemblies are taking place across the state.

“There are no sweeter words any Republican can speak to you than, ‘I am the only Republican running for attorney general,” Brauchler told a receptive crowd. Brauchler, who’s best known for his failed effort to have the Aurora-theater shooter put to death, dropped out of the gubernatorial contest, which has a large and growing number of GOP candidates, and decided to run for attorney general instead.

One of those GOP candidates for governor, former state lawmaker Victor Mitchell, told Arapahoe County delegates that he was in the “midst of a family crisis.”

“Our son might be a Democrat,” said Mitchell to the crowd. “We’re working on it.”

“I’ve balanced budgets, I’ve created jobs, and I’ve built a successful business,” said Stapleton, when it was his turn to speak. “All of which allowed me to pursue the true American dream of high stress and low pay afforded by elected office.”

Stapleton appears to be the top choice of Republican Party stalwarts, according to precinct votes and an early poll.

“I can lead Colorado to build that vibrant future,” said Robinson, who’s best known as Mitt Romney’s nephew. “Give me a chance to do, not to talk, and lead our state.”

After the gubernatorial candidates addressed delegates, businessman Roger Edwards, who’s challenging U.S. Rep. Mike Coffman (R-CO) took the microphone, saying it was a “humbling experience to be in front of you.”

Edwards slammed a budget bill passed by Congress last week, saying it was a “bad deal” that “prostituted our freedom.”

After the speeches in the large hall, delegates broke into smaller groups to vote for nominees for Colorado state house races.

At one such meeting, Toren Mushovic, a businessman who did not face any Republican opponent, explained why he was running for the state house.

Mushovic thanked delegates for their support. He said he’d spoken with many of them in recent weeks and he promised to “continue the discussions.”

“We can win this, and I need your support,” said Mushovic.

The GOP assembly took place as students and adults were marching across the country for better gun-safety laws.

Asked after the house district meeting about his stance on the gun-control legislation that was passed by Democrats in Colorado in 2013, Mushovic said, “I can’t tell you specifically how I feel about the legislation, because I don’t remember it.”

“I’ll tell you my position on guns,” Mushovic said. ” I don’t know about that legislation off the top of my head. I would want to read the legislation. My position is, we need to do what we can to protect our kids. And I support the Second Amendment, just like I support all of the amendments. We need to strengthen background checks. There are a lot of holes in background checks right now, and that’s causing a lot of problems.”

“I think we also need to focus on behavioral health,” he said, saying his company has addressed this issue. “I have experience doing that.”

Asked about the proposal to raise the age for young adults to acquire guns, Mushovic said, “I would support it as long as I think the legislation would pass the Supreme Court. I don’t want to waste time and money. A lot of times state legislatures get into a problem where they pass legislation that doesn’t hold up. I think it’s a waste of everyone’s time and money.”

Arapahoe County delegates chose delegates to represent them at the state convention in April, where candidates with over 30 percent of the vote will be placed on the primary ballot.

Other candidates from both parties will make the primary ballot by collecting signatures on petitions.

A June primary election, which will include unaffiliated voters, will determine the single candidate from each party who will square off in the November election.