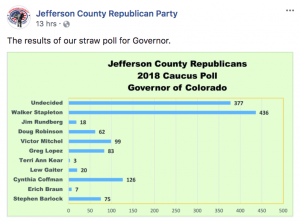 The Jefferson County Republican Party has released its caucus results, in advance of tomorrow’s Jefferson County meeting where delegates from caucuses will select representatives for the state-wide GOP convention April 14.

The Denver County Republican Party also released results on Facebook, showing Stapleton won with 44 percent of votes, followed by Coffman at 34 percent, Barlock at 33 percent, and businessman Doug Robinson at 28 percent, followed by other candidates.

The Denver GOP totals exceed 100 percent, so they must be discounted as meaningless at press time.

In Broomfield, Stapleton won with Coffman a close second, according to a Facebook posting.

Republican caucus-goers in other GOP counties have shown a general trend toward Stapleton, but Barlock won Adams County. Everett won in Pueblo County.

But only a fraction of Republican County groups has released results at all, as they were not required to do so by the state Republican Party.

The Democratic Party announced its state-wide caucus results all at once, showing Cary Kennedy was the choice of 50 percent of the Democratic caucus-goers statewide, while U.S. Rep. Jared Polis took 33 percent, followed by Mike Johnston with nine percent, according to totals released by the Colorado Democratic Party.

Now Democrats and Republicans will vote at their county meetings for delegates who will go to the state conventions in April, where candidates with over 30 percent of the vote will be placed on the primary ballot.

Other candidates from both parties will make the primary ballot by collecting signatures on petitions.

A June primary election, which will include unaffiliated voters, will determine the single candidate from each who will square off in the November election.