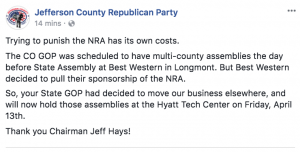 The Colorado Republican Party has decided not to hold its multi-county assemblies at the Best Western Hotel in Longmont, “due to recent news of Best Western pulling their support from the NRA and our 2nd Amendment rights.”

In an email announcement about the Republican State Convention, to be held April 14 at CU’s Coors Events Center, and the multi-county assemblies, scheduled for the day prior, the State party, which is officially called the “Colorado Republican Committee (CRC),” wrote:

We have had many voice their concern over the multi county assembly location due to the recent news of Best Western pulling their support from the NRA and our 2nd Amendment rights. With this in mind along with other factors, the CRC has decided to pull our business from the Best Western Event Center and have changed venues for the Friday, April 13th multi-county assembly meetings. The Centennial Dinner and all Friday (April 13, 2018) meetings have been moved to the Hyatt Denver Tech Center.

“Thank you, Chairman Jeff Hays!” said the Jefferson County Republican Party in response to the decision to abandon the Best Western.

The Colorado Republican Party did not immediately respond to my question about what the “other factors” were in deciding against the Best Western–and whether there had been any opposition to the decision to switch locations.

The state GOP wrote that it was “recent news” that Best Western had pulled support from the NRA, but Best Western “ended any association with the NRA in 2014,” a representative told Business Insider last month. The move came after the Sandy Hook massacre.

In response to gun-safety activists who were calling in February for a boycott of Best Western due to its connections to the NRA, the hotel furiously tweeted that it doesn’t have an affiliation with the pro-gun organization, though Business Insider reported that Best Western was offering discounts to NRA members as recently as 2016.

The move from the Best Western in Longmont to a hotel in the tech center for Friday’s county meetings will surely be inconvenient for Republicans, who are holding their state GOP convention in Boulder on Saturday.  Longmont is in Boulder County, while the tech center is a half hour south of Denver. Republicans may have already booked hotel rooms near Boulder.