“Donald Trump is doing well, and people are excited,” said Barlock. “When there’s only one Donald Trump candidate in the race, Republicans are excited to vote for me. We’re sick and tired of the dynasties and political insiders. We want citizens running citizens’ lives.”

He said the victory is a result of “hard work,” visiting groups across the state, and a reflection of support from a broad range of Republican voters in Adams County, who are dissatisfied with politics-as-usual.

Barlock pointed out that with 30 percent of the vote at the general assembly in April, he’d gain access to the GOP primary ballot. 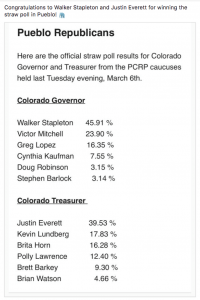 The Colorado Republican Party did not conduct an official tally of gubernatorial preferences among caucus-goers Tuesday, but some county Republican committees held their own informal votes, and the winner so far is State Treasurer Walker Stapleton, judging from GOP county Facebook posts with the results.

Attorney General Cynthia Coffman finished fourth with 8 percent (And her name was misspelled in the final count as “Kaufman.”). 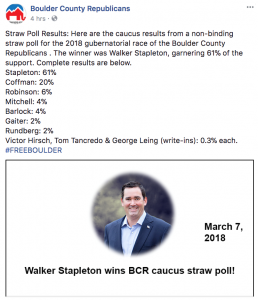 In a straw poll of Douglas County Republicans, with low turnout, Walker Stapleton got all but one vote, according to a Dougco County GOP Facebook post.

On the Democratic side, Cary Kennedy was the choice of 50 percent of the Democratic caucus-goers statewide, while U.S. Rep. Jared Polis took 33 percent, followed by Mike Johnston with nine percent, according to totals released by the Colorado Democratic Party this week.