After He Suggested Hanging Polis, CO Election Conspiracist Says He ‘Never Called for the Death of Anyone’ 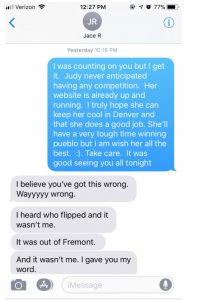 Tamra Axworthy formally ended her campaign to fill a vacant seat in the Colorado House of Representatives, stating in an email today that she can’t “understand why the [Republican] party would move ahead with seating a candidate who was selected under a cloud of suspicion and who has embarrassed our party with racially charged offensive remarks.”

But Axworthy challenged the vacancy committee’s decision at the end of last month, even going so far as to email reporters what she saw as proof that six members of the 11-person committee had voted for her over Reyher. (See the texts below and to the right.)

But Axworthy says State Republicans ruled against her anyway, proving to her that the “process is set up to favor the establishment” and “was rigged to favor Judy, the Chair of her own vacancy selection, from even before the resignation of Clarice Navarro was publicly announced.”

​​”Even when 6 out of the 11 voters provide written statements that show a different outcome from the official party narrative, party insiders are content to ignore it and sweep the matter under the rug,” wrote Axworthy.

“This was certainly confirmed to me when I learned that the party, being aware of a further appeal, certified Judy’s appointment and sent it to the Secretary of State without first directly addressing the evidence of 6 separate voters attesting to a different outcome.” 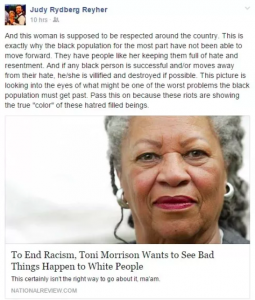 Axworthy is so disheartened by the outcome that she “more than likely won’t be running in a primary” against Reyher, who sparked a national media flareup with her racist comments on Facebook (African Americans are “hatred-filled beings.”) and to The Denver Post (Black people “hate white people with a passion.”). Still, Reyher insists she is not a racist.

“You should never say never,'” wrote Axworthy about a primary challenge to Reyher, “but how can anyone decent run for office when the deck is so stacked against outsiders who wish to serve in an honest, and in this case, non-bigoted way?”

Republican officials, including Freemont County Republican Chair Gregory Carlson, who chaired the vacancy committee meeting after Reyher recused herself, insisted that Reyher was elected fairly by secret ballot, according to an email obtained from a source.

“You will see in the attached statements of Barb Pasco, Marla Reichert, Kayla Bay, and myself that we kept a strict chain of custody of the ballots, that others did not handle the ballots, and that they were properly kept with the Secretary who still has them and can produce them if necessary….

“I believe the meeting and vote count was conducted fairly, accurately, and transparently.  I thank you for campaigning for and for running for this vacancy and would be happy to answer any additional questions or concerns.”

​Reyher has not returned a call to comment on the situation, but she told Colorado Politics of Axworthy’s challenge: “The secretary and the teller committee certified the vote,” she told Colorado Politics after learning about the challenge from a reporter. “It was a secret ballot. End of story. She’s mad that she lost, so she’s going to cause a ruckus for no reason — she doesn’t understand what the words ‘secret ballot’ mean. It’s just sour grapes.”

In the same interview with Colorado Politics, Jace Ratzclaff, who was a member of the vacancy committee, expressed anger over Axworthy’s decision to share his private texts to her with reporters. His vote was among the six Asworthy counts toward her winning margin. (See above and below, where he allegedly wrote, “I gave you my word” to Axworthy.)

Jace Ratzlaff, Navarro’s husband and one of the vacancy committee members, was furious when he learned Axworthy had shared with GOP officials and the media what he considered a private text message assuring her he’d voted for her. While he declined to reveal how he’d cast his secret ballot — “it would diminish the process,” Ratzloff said Tuesday night — he called it “unfortunate” that Axworthy was challenging the result.

“Judy won. Tamra did not win. They are both fine ladies, but in every election there is a winner and there is a loser. And I take offense to the fact that someone is contesting a vacancy committee that was held where all the I’s were dotted and all the T’s were crossed. This is a case of sour grapes,” Ratzlaff told Colorado Politics. “Now that I know that Tamra shared a personal text message, I would absolutely have reconsidered my allegiance.” 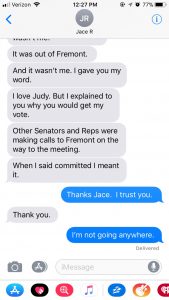 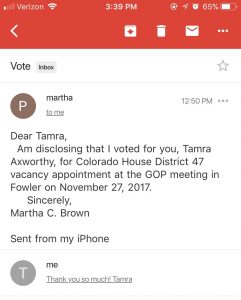 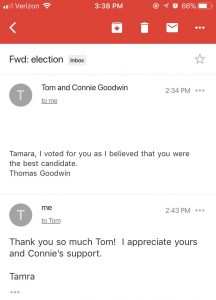 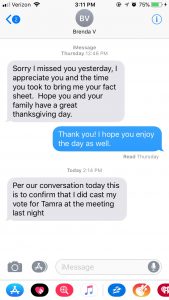 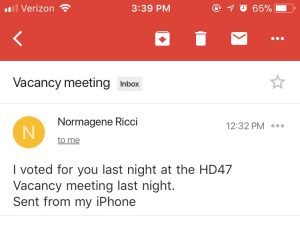 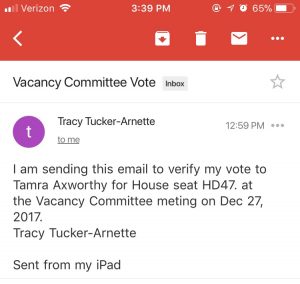