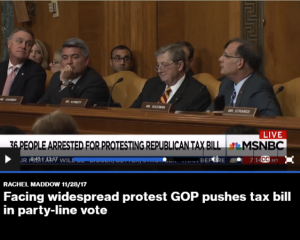 In a radio interview Tuesday, Colorado Sen. Cory Gardner dodged a question about whether he worries about the President, in light of Trump’s “Pocahontas” slur during a ceremony honoring Native American war heroes.

Host Zesbaugh: I know you want to focus on the issues. I know you folks are going to do that today and work to do your hardest at that. But do you worry with the President on Capitol Hill? The buzz is still going to be about the Pocahontas thing.

The nonpartisan Congressional Budget Office reports that by 2027 lower income earners would see their taxes increase because their tax cuts would expire.

Gardner’s refusal to say whether he worries about Trump, who appears to journalists as more and more unhinged, as well as Gardner’s light brush-off of the Pocahontas slur, is a continuation of Gardner’s tack of keeping his criticism of the President to a minimum while voting with Trump over 94 percent of the time.

Gardner’s support for Trump is more at odds with his constituents than any other senator, based on how Trump performed in Colorado, according to the FiveThirtyEight blog. Second is Nevada’s Dan Heller, also a Republican, and he’s well behind Gardner.

This has led some analysts to predict that Gardner would vote against Trump more often, but it ain’t happening with the GOP tax bill, which he voted for in committee yesterday. (See the screenshot above, taken just before the vote.)

Gardner: “Well, you know, again, think we do need healthcare reform, because in Colorado we’re seeing 30, 40 percent premium increases over the next several years,” said Gardner on air. “We’ve seen that in the past. People can’t afford it. So let’s fix that.”

But the Senate tax bill would jack up premiums by 10 percent, according to nonpartisan Congressional Budget Office.

Before successive votes to repeal Obamacare, Gardner claimed to want to lower the costs of health insurance premiums. But nonpartisan analysts estimated that the repeal bills would have resulted in double-digit premium increases. Gardner has yet to offer or support a healthcare plan that would lower premiums.

Gardner has boasted about “many great conversations” with Trump. He’s reportedly touted Trump’s “many accomplishments.” Gardner himself has criticized Trump, but he has called his own critics, many of whom want him to stand up to Trump, “paid protesters.”